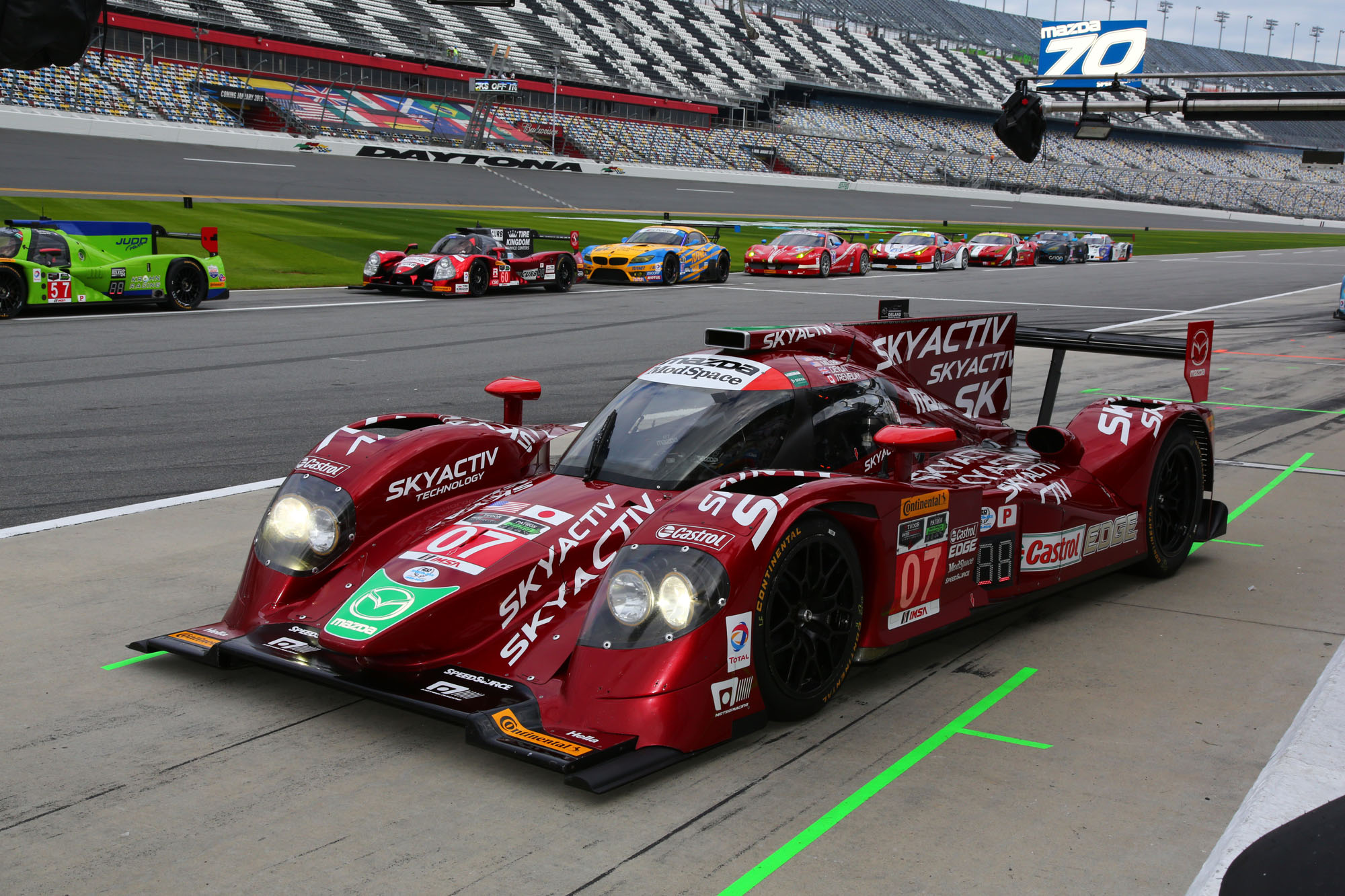 The practice and qualification sessions for the 53rd 24 Hours of Daytona were held on January 22nd and the two Mazda prototypes equipped with overhauled SKYACTIV-D racing engines successfully passed through official qualification. They will now move onto the next step towards the race on the 24th.

Although it was a little cloudy in the early morning, the weather cleared up by around 10:00am and the day gradually developed into the warm, temperate conditions that are typical for Florida this time of year. In the one-hour practice session held from 9:25am, peeling of the new tires was carried out for the two Mazda prototypes, after which each machine’s 3 drivers went out onto the track to get warmed up. This was followed by a fairly relaxed period where the team worked on small things like polishing the cars’ body and practicing driver changes. As the team had already driven the prototypes quite earnestly at the official tests held two weeks prior, the set-up for the chassis, aerodynamics, and so on, had all been essentially determined and it was decided that they would avoid wearing down the machines as much as possible. This was also the reason they decided to skip the second practice session held from 1:20pm. After this they headed into the 15-minute official qualifying sessions that began from 5:30pm. During this time, where only the 16 prototype vehicles were out on the track, each machine was driven by only one driver and would pass through qualification if their time was successfully recorded. Behind the wheel for the #07 was Tom Long and in the #70 was Jonathan Bomarito.

In this official qualifying session, Daytona prototypes that had until now boasted overwhelming performance, found themselves narrowly ceding pole to Michael Shank Racing’s machine which mounts an HPD engine in an Ligier JS chassis. As for the Mazda prototypes, the #70 passed through the session at 13th in class, while the #07 was unfortunately forced back into the garage after completing only 3 laps. This was due to a drop in oil pressure and as a precaution it was decided that they would exchange the engine.

Although the #70 only managed a 13th place qualification, they managed to reduced their lap time by up to 6 seconds over last year and the atmosphere within the team was extremely positive. Since the goal of a 24-hour race is to climb up through the order, the importance placed on qualification is comparatively small. There is a 1-hour practice session scheduled for the morning of Friday the 23rd. The #07, having exchanged its engine, will be heading out onto the circuit for this session. The #70, on the other hand, has completed its intended preparations and so will not be running for this practice.