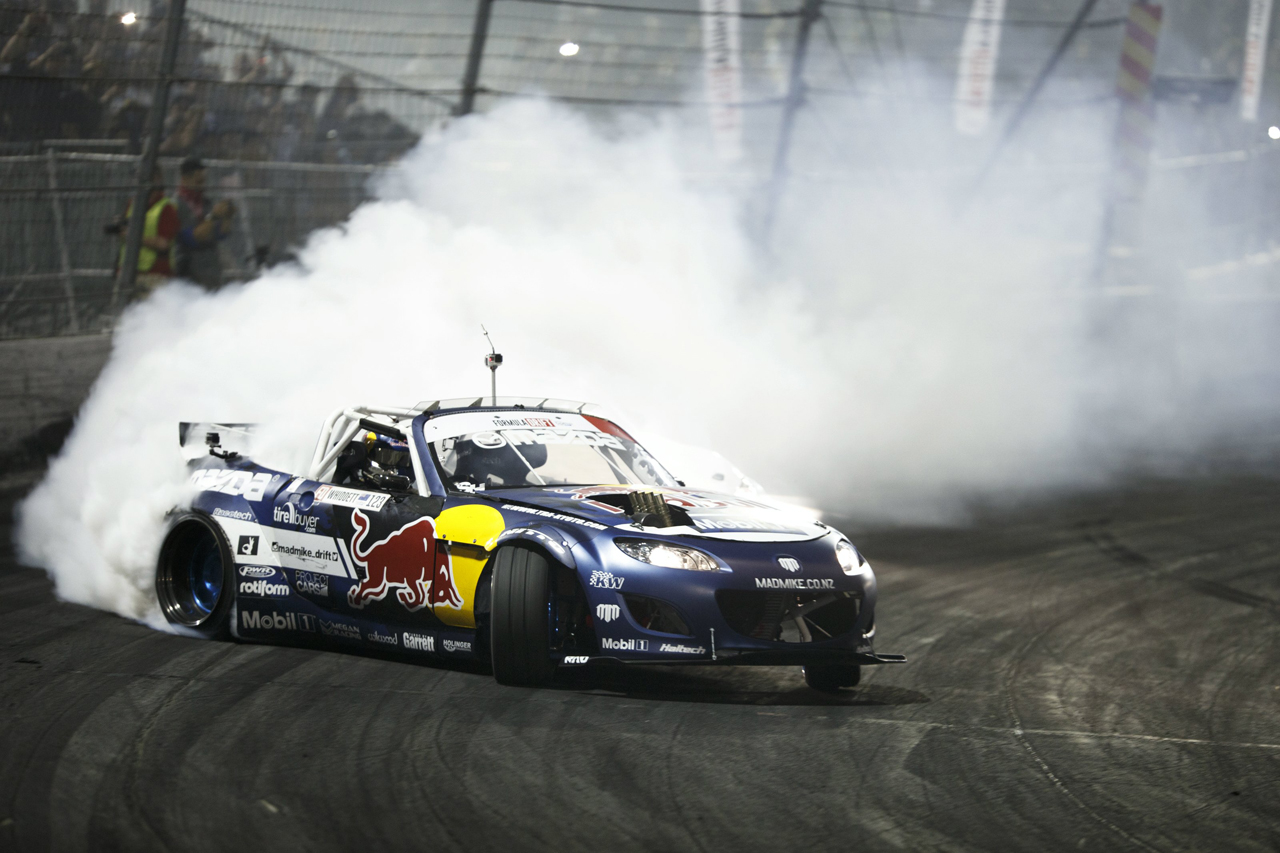 New Zealand’s pro drifter, Mad Mike competed in the final round of the Formula Drift Championship held at Irwindale Speedway behind the wheel of his 4-rotor twin turbo RE Mazda MX-5 “RADBUL”.

The new machine that Mad Mike competed with this year, his Mazda MX-5, was nicknamed “RADBUL”. It is the successor of Mike’s previous machines, the FD3S Mazda RX-7 MADBUL and Mazda RX-8 BADBUL. The RADBUL places a 4-rotor engine into the engine room of a NC MX-5, and adds to it two Garrett GTX45 turbochargers to produce more than 1200hp. Taking charge of developing the engine was Pulse Performance, who wowed the rotary industry with a 6-rotor retrofitted RX-4 drag machine in 2012. This speedshop is based in Mad Mike’s home of New Zealand.

In Friday’s qualifying Mike took RADBUL out and scored 78.00 in his first qualifying session to see him in the top 10 out of the 35 competitors. He followed this up with a high-precision second run that saw his rear bumper skim centimeters from the wall bank, and he steadily checked off each clipping point to grab a score of 83.00 to raise him to 4th position. This would be his highest ever position in the Formula Drift Championship and matched the score of point leader, Fredric Aasbø.

Having finalized RADBUL’s settings, Mike headed into practice on the final day confident of his strategy for Irwindale and ready to make waves. Unfortunately, Mike would hit the wall on his first lap, which caused some damage around the RADBUL’s rear tire hub. Furthermore, there wouldn’t be enough time to carry out repairs before the final tournament for the 32 strong field began. In spite of this, Mad Mike adapted to the machine’s state and managed to pull out clean performances in both the lead and chase runs to defeat opponent, James Evans.

After this, the team was given time to replace the damaged parts. In the top-16 contest he went up against high-ranked Ryan Tuerck. In the end, Tuerck hit the front of his Scion FR-S on the wall and, despite being given 5 minutes to carry out repairs, could not fix the damage in time and Mike advanced into the best-8.

He would then face off Fredric Aasbø in the fight for the best-4. Having secured this year’s championship after making it into the top 16, Aasbø had nothing to lose. Beginning in the lead run, Mike pulled out impressive speed and angle to make it a close match. After that,s though, Mike lost sight of a corner clip in Aasbø’s tire smoke, missed it and was unable to advance into the semi-finals.

Mad Mike later related, “[At] the final round of the 2015 Formula Drift Championship held at Irwindale we went out with a bang and showed we are going to be a serious force to be reckoned with in the 2016 series. We as a team have well over exceeded our expectations for the debut and development season for project RADBUL consistently qualifying in the top10 and battling into the top16 with a 5th overall at the grand final. Our little weapon Mazda MX5 / Miata is crazy fast and I am feeling confident. In the 2015 series we gained a lot of valuable data / set-up and know what we need to change in the off-season providing a solid foundation going forward.”

Mad Mike and RADBUL finished the final round of the Formula Drift Pro season in 5th place. He competed 2015 in a new machine and team setup. Their new beast has come into its own and Mike went on to describe how he has learned to control his psychological state and concentration during competitions. Also, from the above comment, it seems the team is more than ready for next season and we can expect big things from this rotary monster in the near future.