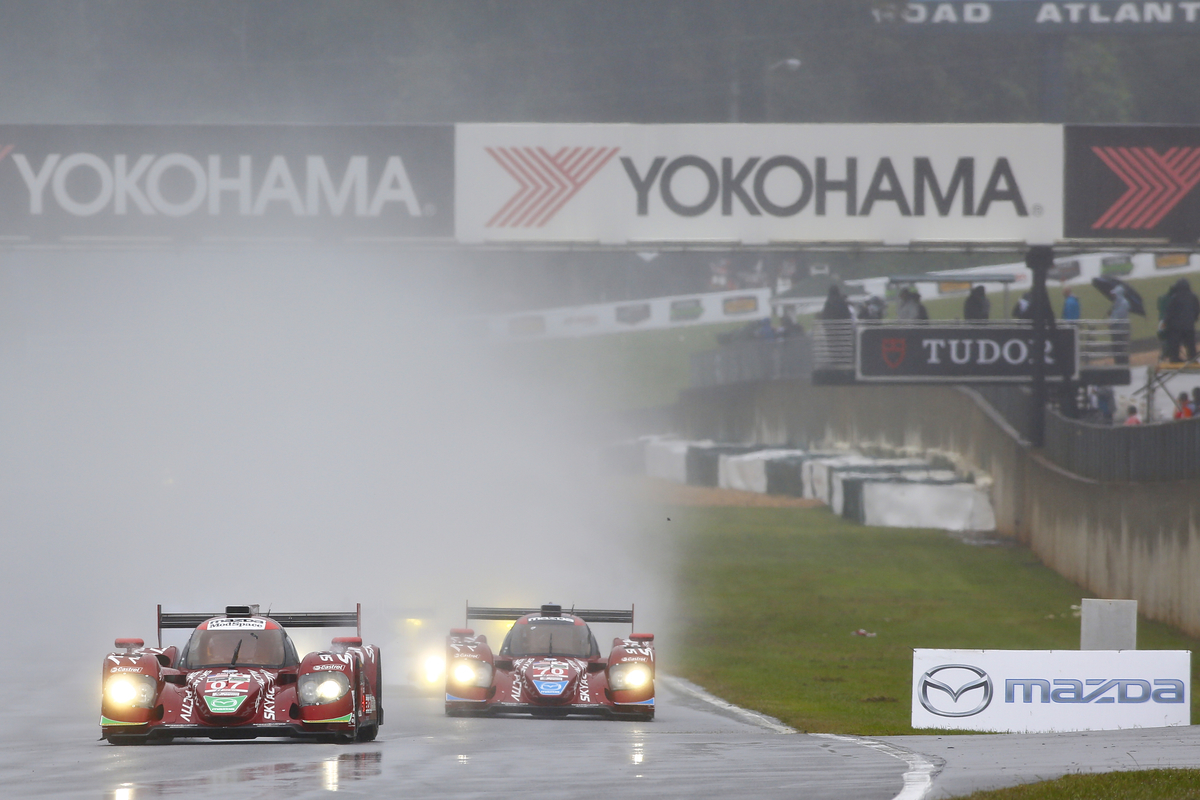 The TUDOR United SportsCar Championship’s 10-hour endurance race, the Petit Le Mans Powered by Mazda, was held at Road Atlanta on October 3rd (Sun). The race was ended at the 8-hour mark due to severe weather conditions and the SKYACTIV-D Racings finished 6th and 7th. This marks the final race for these prototype machines that utilize stock block Mazda SKYACTIV-D diesel engines.

Due to the exceptionally extreme weather conditions the 10-hour endurance Petit Le Mans Powered by Mazda was forced to end after 8 hours. The incessant rain caused numerous large pools of water that eventually made it like driving through a river. Furthermore, the large sprays kicked up by these racing machines showered any following competitor to a point where drivers could barely see passed their own hood. Within these hazardous conditions the Mazda drivers judged that keeping the car on track would be incredibly difficult. At the 6 hour, 40 minute mark, during the stint of Tristan Nunez, the #70 broke an input shaft and came to a stop on pit lane. Approximately 20 minutes later Tom Long decided that the course conditions had become too dangerous and brought the #07 back to the garage. In the end the #07 driven by Long and Joel Miller finished in 6th (overall 30th), while Nunez and Jonathan Bomarito’s #70 placed class 7th (overall 31st).

#07 Joel Miller commented after the race, “It was definitely mentally taxing today. A typical rain race but visibility was definitely the limiting factor. It was ebb and flow, but we had to be smart today. That was the biggest thing. We didn’t put a wheel off and kept the car pointing in the right direction. It’s really quite poetic to conclude this chapter here. We got the first win for that diesel engine here at Road Atlanta in 2013 in the GX class. The development over the past three years has come so far. Hats off to David Haskell (head of SpeedSource’s engine department), Zach Lagrone (team strategist/engineer) and everyone in the engine shop to get to the limit of what this engine was capable of doing.”

#70 driver Tristan Nunez added, “Both of my stints were treacherous and it had been that way all day. The first stint, we had a fogging issue where the windscreen and the side windows were completely fogged up. So, you put in the fog, plus the spray from the other cars – it’s basically like shooting a jet ski spray of water. It was ridiculous out there. I was using the side of my glove to try to wipe off as much fog as I could to at least see some of the curbing. It was just straight-up survival mode. The second stint was amazing. The guys engineered some sort of device that completely de-fogged the windows. They did that in between stops – and the effort from the guys behind the pit wall was unbelievable. My pro career started with the diesel, so it’s going to be kind of sad to see it go away.”

With these comments the racing program utilizing the Mazda SKYACTIV-D engine powered prototypes has come to a conclusion. This power unit managed to take a stock 155hp block and pull out an impressive 500hp from the modest 4-cylinder diesel engine. The Mazda LMP2 SKYACTIV-Ds demonstrated the racing potential of diesel engines. We now look forward to seeing what Mazda has in store for us next year!