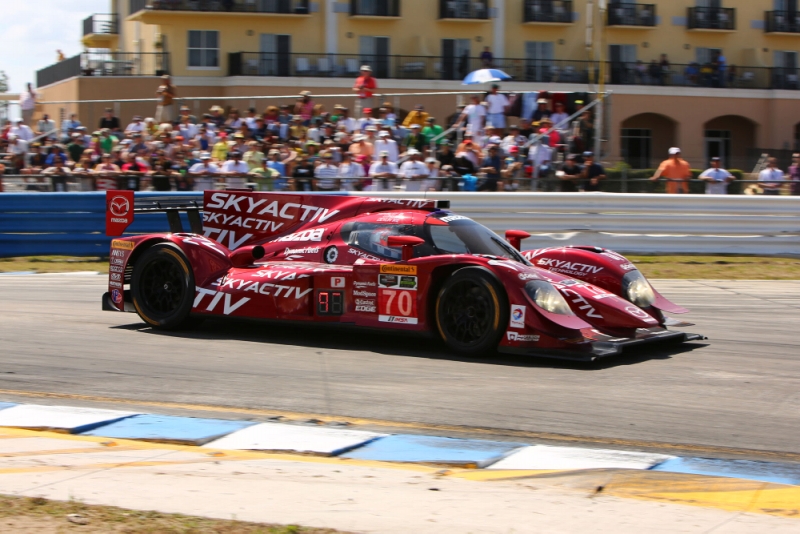 At 10:15 on March the 15th (Sat) the 62nd Sebring 12 hour race began. On this day 64 vehicles lined up on the grid. The #70 Mazda LMP2 SKYACTIV-D, having been unable to record a qualifying time started in last place and the #07 Mazda LMP2 SKYACTIV-D had a pit lane start and was required a drive through following the start of the race.

The two Mazda LMP2s had resolved the problems that had been concerning them on the previous day and were showing fine form during the pre-race warm up practice runs. According to team representative Sylvain Tremblay, “repairs have been completed for replacing the seal and piping in the #70 and the problems for the #07 have been resolved after replacing the electric wirings which was the most likely cause. We’re sorry for all the fuss.” After starting in the rear the two cars gradually began reeling in the cars ahead and, bit by bit, began climbing the leaderboard. Tremblay started in the #7 and Joel Miller was the top batter for the #07. Although Miller had some light contact with a GT machine in the early stages, as there didn’t appear to be any serious damage, he continued the race.

When the race was about to enter into its 4th hour, a PC car lost control and crashed at the final corner. Being on the approach to the straight, the following PC cars were unable to effectively evade it and they violently collided. The red flag was taken out in order to clean up the debris scattered on the course and after this the race continued on full caution. However, the fact that there were no injuries to the drivers even in a crash of this magnitude really demonstrates the high level of safety of recent race cars. Looking at the two Mazda cars at this point, the #70 was in 12th place for its class while the #15, having lost two laps due to the drive through in the early stages, was 14th in the same class.

4:15 pm. 6 hours have passed in the race and the #70 driven by Ben Devlin is running in 10th in the prototype class. At around 3:20pm the #70’s rear tire suddenly came off and was forced to stop. At this point the car was brought back to the garage for related parts inspection.