Mazda Team Joest Have a Rough Start to the IMSA Season 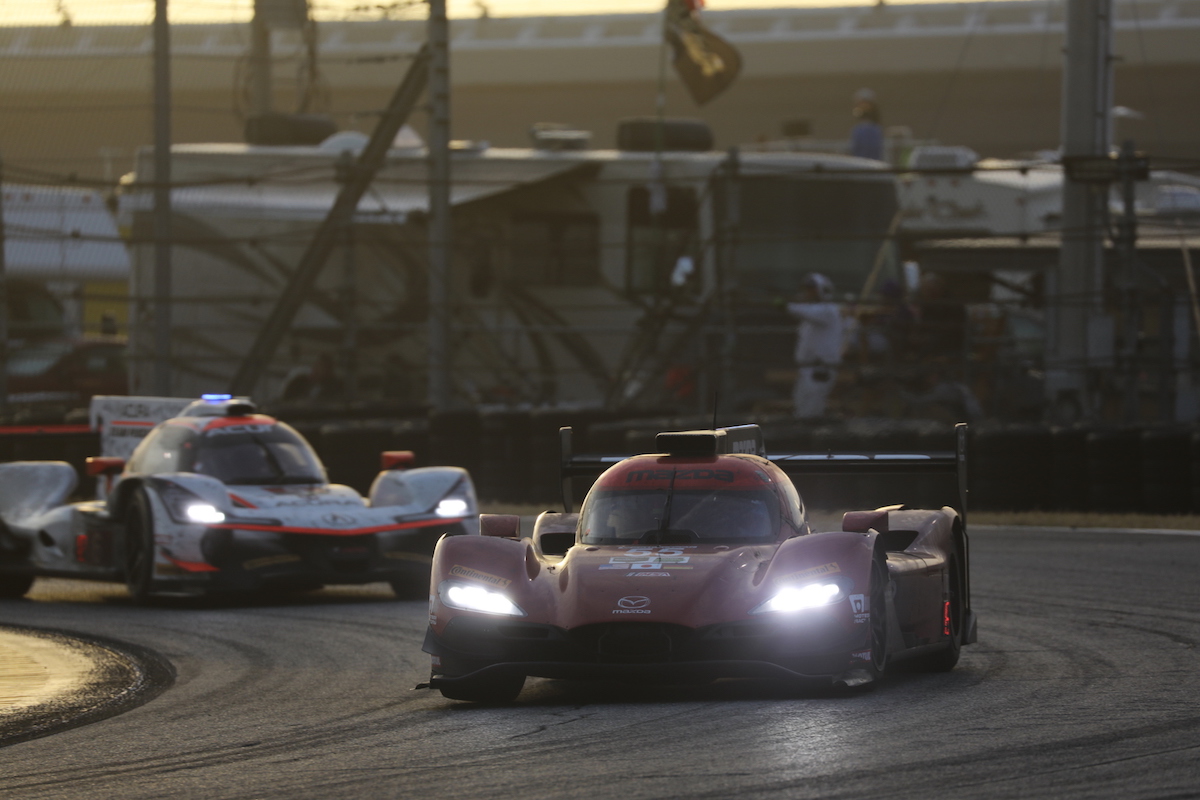 The opening round of the IMSA WeatherTech SportsCar Championship, the 24 Hours of Daytona, began from a rolling start at 2:40pm under cloudy but warm and breezy conditions on January the 27th (Sat).

Starting from 9th on the grid, the #55 Mazda RT24-P’s shift actuator failed to engage properly during the rolling lap and was left sitting in the pits. After that, however, the gearshift engaged and starting driver Jonathan Bomarito was able to rejoin the pack for the first formation lap and return them to their position of 9th place. Then, when the green flag was waved, the 24-hour endurance race began. In the #55 Bomarito immediately shot up to 7th place. As for the #77 Mazda RT24-P, that began from 19th after having been unable to take part in qualifying, saw Oliver Jarvis take the wheel and begin a fight back as soon as the green flag was flown. After one hour had passed the #55 and #77 had reversed fortunes, with the #55 running in 13th and the #77 in 11th.  However, from that point on they would both experience a number of misfortunes. The #55’s front left tire came off and this resulted in a significant time loss. Fortunately, there wasn’t any serious damage and they were able to restart but the incident dropped them down to 18th. Then the #77 suffered a burst tire. Although the DPi lap times had been had been brought closer together, the balance of performance had also increased the likelihood of these types of tire trouble. The Nissan DPi and #10 Cadillac also experienced similar burst tires with one car severely damaging its cowl.

From that point on the Mazda RT24-Ps ticked off laps at 16th and 18th but this did not mark the end of their troubles. Clutch issues resulted in lost time and then vibrations began to be felt in the body of both machines. This began to cause trouble with the electrical systems. Then there was a crack in the intercooler that occurred. These problems had not occurred during the multiple tests that they had carried out up until this point. Then, after the long night had passed and 17 hours had passed since the race began, flames began to spurt out of the rear of the #55. Race officials extinguished the fire at the side of the track and Jonathan Bomarito exited the vehicle unscathed. The flames were caused by heat from the exhaust igniting portions of the car’s body. The bad luck just kept on coming and at about 18 hours into the race the #77 also came into the pits. Tristan Nunez, who was driving at the time stated that it was electrical trouble. These issues continued to plague the car and components such as the power steering began to fail. The team tried their best to repair the issues in limited time but the risk of other problems was too high and the decision was made to retire. An unfortunate end since the engine, suspension and other technical portions were performing well. This is the second year in a row the newly debuted Mazda RT24-Ps have both retired in the 24 Hours of Daytona.

Oliver Jarvis (UK), who joined the team this year, stated, “It was a pretty tough race. Our car definitely has the speed but there are still improvements that need to be made to the reliability. I think there are a lot of areas we need to work on to get them sorted but I’m sure that this group of people are more than up for the challenge. The fact that the cars’ laps times are 3-4 seconds faster than last year is amazing. I think the team has made some large leaps forward. I was able to grab a victory for Audi in the 2013 12 Hours of Sebring so I would love to be able to pull out the full performance of the Mazda DPi and take another win there.”

Mazda Motorsports Director, John Doonan related, “Not only were we unable to get the kind of result that we wanted from this year’s Daytona race but we incurred a number of troubles. Since 2013 we have struggles to race as we would have liked here at Daytona and so we really wanted to achieve a better this year with our new team structure. We’re really proud of our alliance with Joest but in spite of the 9 days of testing here at Daytona, the three days at Sebring and two days in Europe we still encountered these type of issues. We had trouble with the drivetrain, electrical issues and tire problems, then ultimately the #55 couldn’t continue racing due to the flames the occurred to its rear. We decided to the retire the #77 because we didn’t think it was totally safe to continue racing with its electrical issues. That being said there are some positives that we can take away from today. The cars are undeniably fast and the pace we have managed to get into our hands puts us up there with the top group. We will be racing on all kinds of tracks from here on out. Ever since we announced our new team structure in July of last year I’ve been telling the Mazda fans that we will be aiming for victories, podiums and the championship. We will overcome the difficulties we had in this race and fulfill the promises we made to our supporters.”