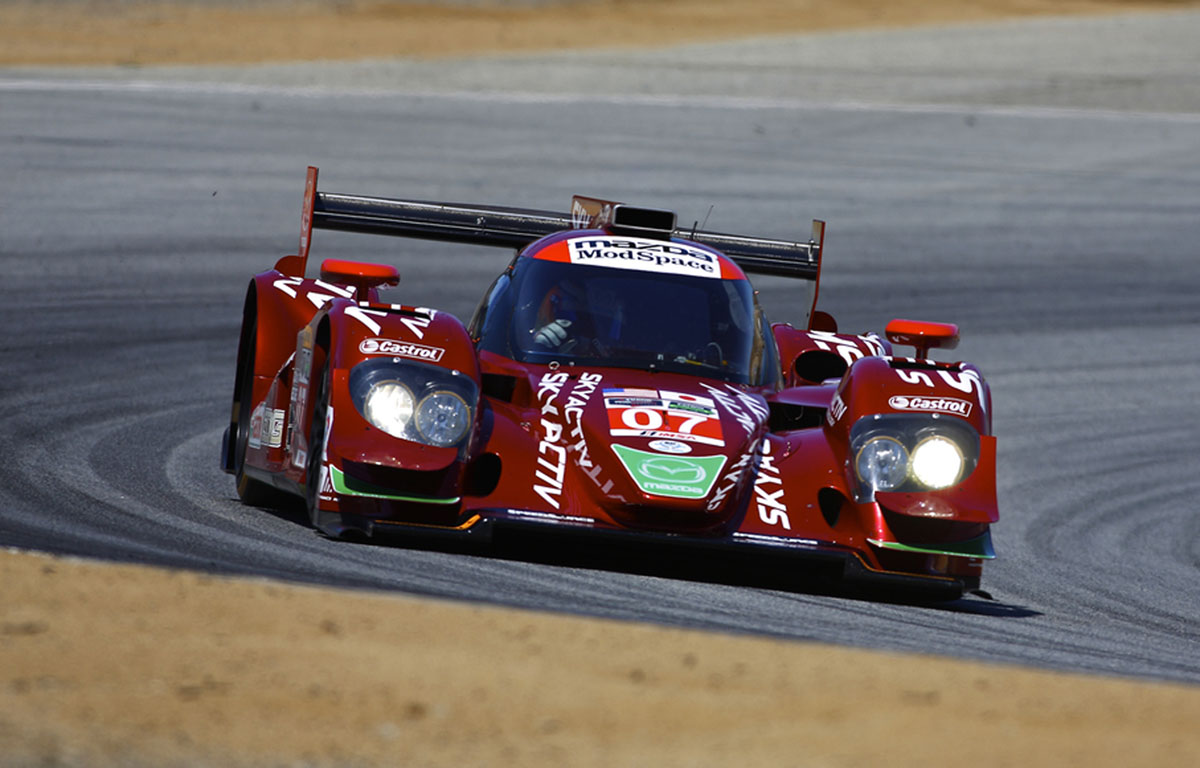 IRVINE, Calif. (May 3, 2015) – The No. 70 Mazda Prototype with drivers Tristan Nunez and Jonathan Bomarito recorded a finish of sixth in class and seventh overall in today’s Continental Tire Monterey Grand Prix powered by Mazda. Both numbers match the best-ever results for the diesel-powered Mazda Prototypes, which began an aggressive development program in 2014. Tristan Nunez, who started the race in the No. 70 car, led seven laps, taking advantage of the fuel economy from the diesel engine. It is the second race that Mazda has led this season.

The sister car, the No. 07, started strong with driver Tom Long before dropping out of the running early with engine issues. Long and teammate Joel Miller finished ninth in the Prototype category.

Tristan Nunez, driver, No. 70 Mazda Prototype
About starting the race and being in the midst of heavy race traffic: “As the starting driver, you have to think of the long view of the race. Mostly, I was thinking of putting it in Jonathan’s hands. That’s what’s tough as the starting driver: you have all of the traffic – it’s mayhem in front of you – but you’ve got to keep the car clean. Our plan was to keep up with the leaders so that we could get in a position where we could lead and take advantage of our fuel mileage advantage.”

About leading overall for the first time in his young Prototype career (Nunez is 19 years old.): “The team came on the radio and told me that I was leading the race, and then I looked at the No. 70 up on the (scoreboard). It was really surreal. I dreamed of leading and winning with this team since I started racing. It was my dream to wear the Mazda brand. And what better place to do it than Mazda Raceway! This is the race track where I won my first car race… oh gosh, I was such a young boy. It was 2010 in the Skip Barber Series.”

Jonathan Bomarito, driver, No. 70 Mazda Prototype
About matching the best-ever finish for the Prototype: “We’re racing at Mazda Raceway in a Mazda SKYACTIV diesel – so it’s an amazing day really. I feel bad for the guys on the No. 07 car, they had some trouble early, but the No. 70 had a great race. Good strategy, good pit stops. The drivers want so bad to have good results for these crew guys who work so hard year-round, and for Mazda and SpeedSource. I’m happy about the day and the car ran great.”

About repeatedly lowering his personal-best lap times late in the race: “When the field gets spread out, you’re almost racing yourself. Primarily, you’re managing traffic and trying to keep improving that lap time. That’s what keeps you motivated and pushing, and we were running a really decent pace at the end of the race.

Mazda’s SKYACTIV Prototypes compete in the highest category of the TUDOR United SportsCar Series. It is the peak of the brand’s motorsports program that includes comprehensive driver development ladders in both sports cars and open-wheel racing series that is unmatched globally.