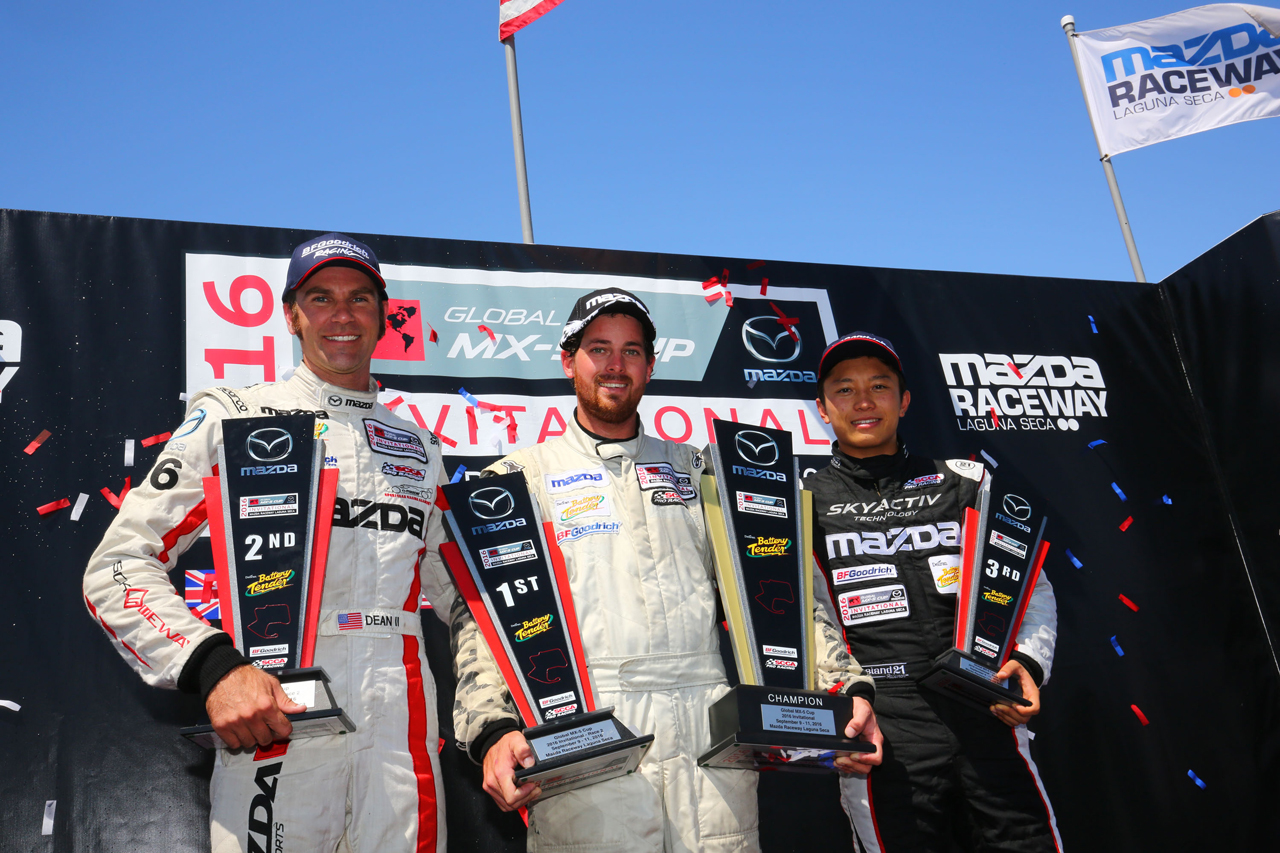 The second Global MX-5 Cup race was held on September 11th (Sun) at California’s Mazda Raceway Laguna Seca where Japan representative Yui Tsutsumi (21 y/o) went up against some of the world’s most promising drivers and managed to take home 3rd place.

The morning on this day was also wrapped in fog, which resulted in the entire event’s time schedule being pushed back. In the opening ceremony held before race start, Enami Kitahara, the other representative from Japan who was unable to participate due to a crash that occurred two days before, turned out to report that she was in good health. She also gave strong words of encouragement to Tsutsumi. She related, “I’m sorry if I caused any of you to worry. I’m totally fine and the doctor has told me there is nothing to worry about. To be honest it’s incredibly disappointing to not be able to take part in this race. If I get another opportunity, I would love to take on this challenge one more time.” The race began when the skies completely cleared at 11:50am, approximately 2-hours after it was scheduled to start.

Having said pre-race, “As long as I stay on the heels of the top group I’ll have a chance,” Tsutsumi immediately jumped into 4th from his 5th placed grid position. From there he was fiercely pursuing the top 3 who could see him out of the corner of their eyes. In the middle of the race a crash resulted in the dispatch of the safety car in order to remove the vehicle from the track and this meant that the margin he had built over the competition to his rear was lost. Then, when the green flag was raised, he let the #7 MX-5 (Moritz Kranz / GER) get passed him. However, Tsutsumi’s strong point is never getting flustered. When the race entered its final stages the #7 MX-5 presented a momentary opportunity and Tsutsumi managed to retake his position. Having returned to 4th place he re-engaged in his battle for a top placing finish. Then, some drama occurred at the final lap. Having fought off those to his rear for the majority of the race, Robby Foley (US) made a gear shift error at corner 5 and this caused some gear box trouble. From that point he gradually fell back down the order. Making it passed Foley, Tsutsumi passed the checkered flag after 45 minutes in 3rd place and secured a podium finish.

Tsutsumi stated, “To be honest I couldn’t hear anything over the radio, so I didn’t know if my pace was on par or what was happening with the cars behind me, so it was pretty tough. Kato was in a high position and trying to give me directions… [if the radio had been functioning properly] I think I could have been more competitive. Still to be able to get 3rd place up against all these drivers, not just from America, but from around the world, isn’t bad at all, is it? I think I achieved the bare minimum that I set out to. But to be honest I really wanted to be standing in the center of the podium.”

Victory was taken by Nathanial Sparks (Florida, 26y/o), who was fastest in qualifying, and combined with the results from the first race this made him invitational race champion. He said, “Last night, with the team, I thought about how many points I had and what I would need to do in order to secure the championship. That being said, carrying out that goal was no easy task. I had to come out on top of my battle with Robby Foley. Not only him, but the rest of the competition was fierce. I’m incredibly proud to have been able to win this race.”

President and CEO of Mazda North American Operations (MNAO) and managing executive officer, Mazda Motor Corporation (MMC), Masahiro Moro had the following to say. “Mazda is an international company that has passion for driving that includes motorsports. We are delighted by Mazda USA Motorsports Group’s success in conveying the excitement of driving to Mazda group members from around the globe. For that reason, we are already looking into ways to make next year’s Global MX-5 Cup invitational race even more exhilarating.”