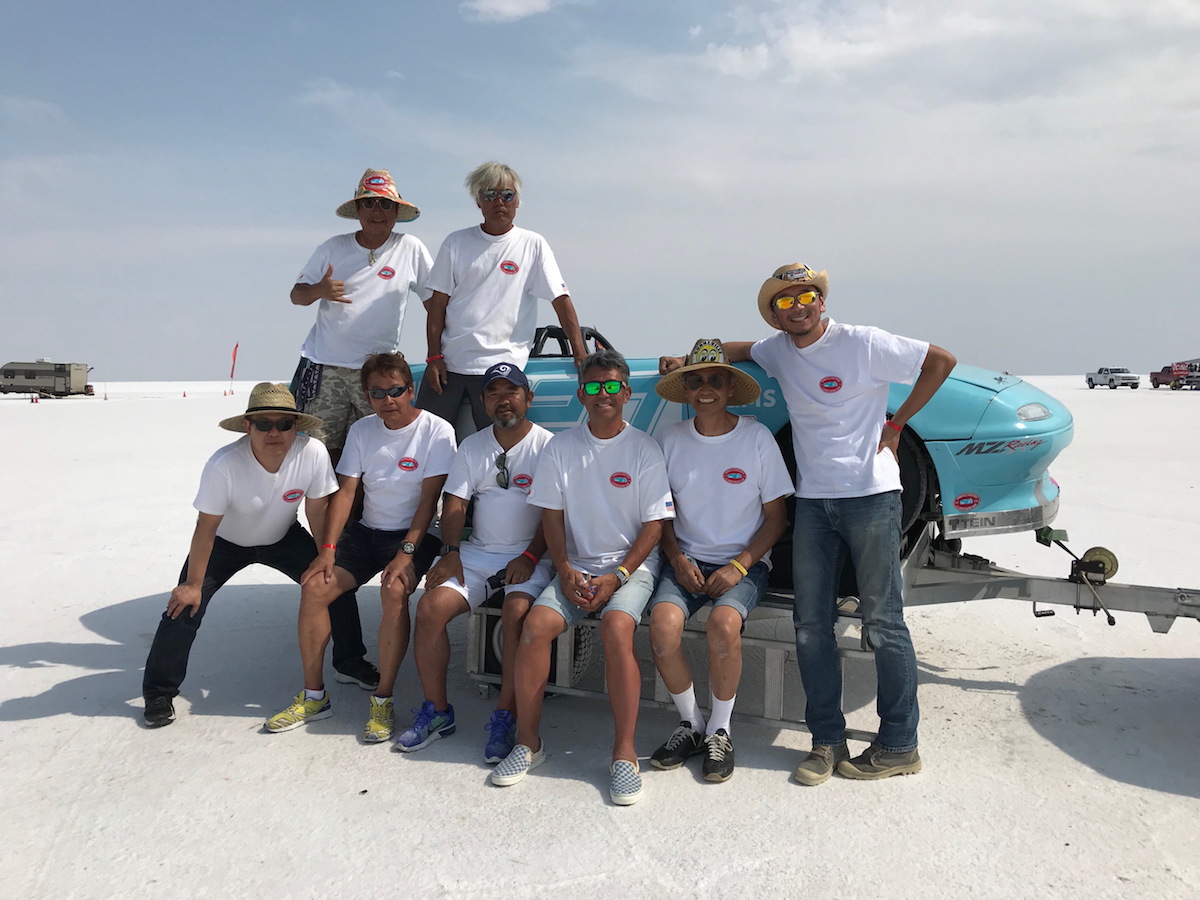 The 70th Bonnneville Speed Week was held at Utah’s Bonneville Salt Flats from August 11th where the F-5 Spirits Racing Team led by Los Angeles resident Sam Okamoto, achieved a personal best land speed of 280km/h, achieving their goal for this year. In this their third challenge they achieved a major first step towards their dream.

The current goal of entertainment producer, Okamoto was to take on the modified market model sportscar category with a 3 liter naturally aspirated NA type Mazda MX-5 mounted with a 13B rotary engine and clear a maximum speed of 280km/h (approx. 175 miles/h). The first time the team intended to take on the challenge was in 2014 but that year, as they headed to the venue, torrential rains poured down on Bonneville Speedway (a location that could fit the entire Yamanote Line) transforming it into a veritable lake and the event was cancelled. In the following year the track conditions weren’t perfect and it was feared that the future of this legendary speed challenge event may be in jeopardy. Halfway through last year it looked possible that the organizers may again give up on the event but as the year moved into early summer the Southern California Timing Association (SCTA) announced that the 2016 meet would go ahead and Okamoto hastily made preparations with his team.

After they transported the machine from LA, a trip of about 1000km, their hastily prepared car just barely made it through vehicle inspection. Despite the hastily made prep, they were still able to record a speed of 151mph (241km/h). Having skipped two years the team was becoming somewhat despondent but Okamato’s indomitable spirit was reignited this year. However, in 2017 the conditions at the salt flats weren’t great and in their first run they dropped into a crevice in the connecting road and damaged the machine’s upper arm. Also, this year the crew chief, Yoichi Irie, who had been working on the car right from the beginning, was unable to adjust his schedule to take part and this left the team in a conundrum. Along with that, strong winds assaulted the venue several times and this meant that the team could only run on two of the four days they were scheduled to compete, which meant they couldn’t run as much as they hoped. Due to these issues the fastest time they could record was a 137mph (219km/h), slower than their previous effort. This showed them that they had a lot more work to do in order to raise the car’s performance.

This year Okamoto began working on the car much earlier than in previous years. To begin with, he perfected the belly pan, which conducts the air on the underside of the car’s body, which had been an issue in their previous attempts. He also replaced the WEVER carburetor from a 48 Φ to a 51 Φ in order to increase power. In addition, concentrating on improving aerodynamic performance, he installed a new duck tail spoiler, sealed the front bumper opening, added a forced cooling fan to the radiator and installed an air intake to the bonnet and a canopy roof to the roll cage. In order to increase the power he also enlarged the carburetor and the measured value on the dynamometer was 220hp at 8,000rpm. Okamoto believed that a peripheral port NA 13B would be capable of producing 250hp. With Bonneville being located at an altitude of 1,200 meters, it was certain that their would be a limit on the power the car could produce.

However, this year the team were heading into the event with new determination. This was due to the fact that Hikaru Miyagi, who recorded a 261.966mph (421.594km/h) at Bonneville in 2016 driving a Honda Streamliner, the fastest in the FIA class, would join the team as a guest driver. A former All Japan Grand Prix rider, he is a skilled rider who as taken several championship titles and has also competed on four wheels in the Super Taikyu, amongst other series. Miyagi’s knowledge and high speed techniques were certain to contribute to the team’s efforts.

This year’s Speed Week began on the morning of August 11th with a driver’s meeting. After that there was one high speed trial. For this, team owner, Okamoto took the wheel. On the 2-mile rookie course, the shortest of the venue, he recorded the same as last year’s best, a 157mph (252km/h). Going onto the 3-mile course, Okamoto implemented two runs and marked down a 161mph (259km/h). From then Miyagi took the cockpit. Under a temperature of 33°C, the conditions of the salt flats were good and the whole team was eager to see what Miyagi could do. He went on to record a 163mph (262km/h).

Waiting for pick up at the finish point, Miyagi stated, “The straight away speed is pretty good. The car feels great to drive.” While the team was elated that the car was getting faster with each run, a problem arose. According to Miyagi, “In the middle of the run it felt like there was a little overheating and we might be leaking some engine oil.” Opening the engine hood it was revealed that the join of oil filter tower had come loose and a large amount of oil was spraying into the engine room. After returning to the pit they found that the amount of oil lost was not too excessive and it was unlikely that it had damaged the inside of the engine so the team was slightly relieved. They decided to replace the oil catch tank and began carrying out work.

Miyagi then suggested they increase the air-fuel ratio and so they increased the main jet another two levels. The team next used the second day’s trials to confirm the carburetor’s setup in two runs but there wasn’t an explicit increase in performance or increased speed. Not only that, this time the cooling water boiled over and overflowed. They made the decision to head into the next trial after they had adequately cooled down the cooling water and so ended their runs for the day. Then on the third day, they closed the front intake, which they had opened thinking it might improve the cooling, and headed into the next attack having reduced air resistance through reducing the amount of air flowing through the engine room. As a result, Miyagi, who took the wheel for the second run, recorded a 173.5mph (279km/h), which put the team into high spirits. The temperature was relatively cool on the fourth day and so the team thought that if they went back out onto their second run quickly they should be able to achieve their goal and the everyone was feeling very positive.

On the final day the team would compete, August 14th, they headed out from their hotel at 6:00am. However, they were not the only team who wanted to make their attempts when conditions were good. As they headed to course 3 following preparations, there were already 20-cars lined up waiting to make their runs. This left them waiting about an hour and a half before their first run of the day, which was the eight of the course. The temperature was 26°C and mostly still, perfect for a speed run. Driver Okamoto was completely focused at the start and in the end recorded a 174.756mph (281.2km/h). The team were ecstatic with this result and felt that all their trials and tribulations up until this point had been rewarded. They all said together, “Our next goal is a class record of 200.24mph (322km/h).

Team representative, Okamato stated, “This result was due to everyone coming together and I’m really satisfied to have been just 0.244mph off our target speed. Thank you so much to all those who have supported us. We’ve found all the areas that we need to work and I want to work to solve all those issues and come out next year to try and record a speed over 200mph.”