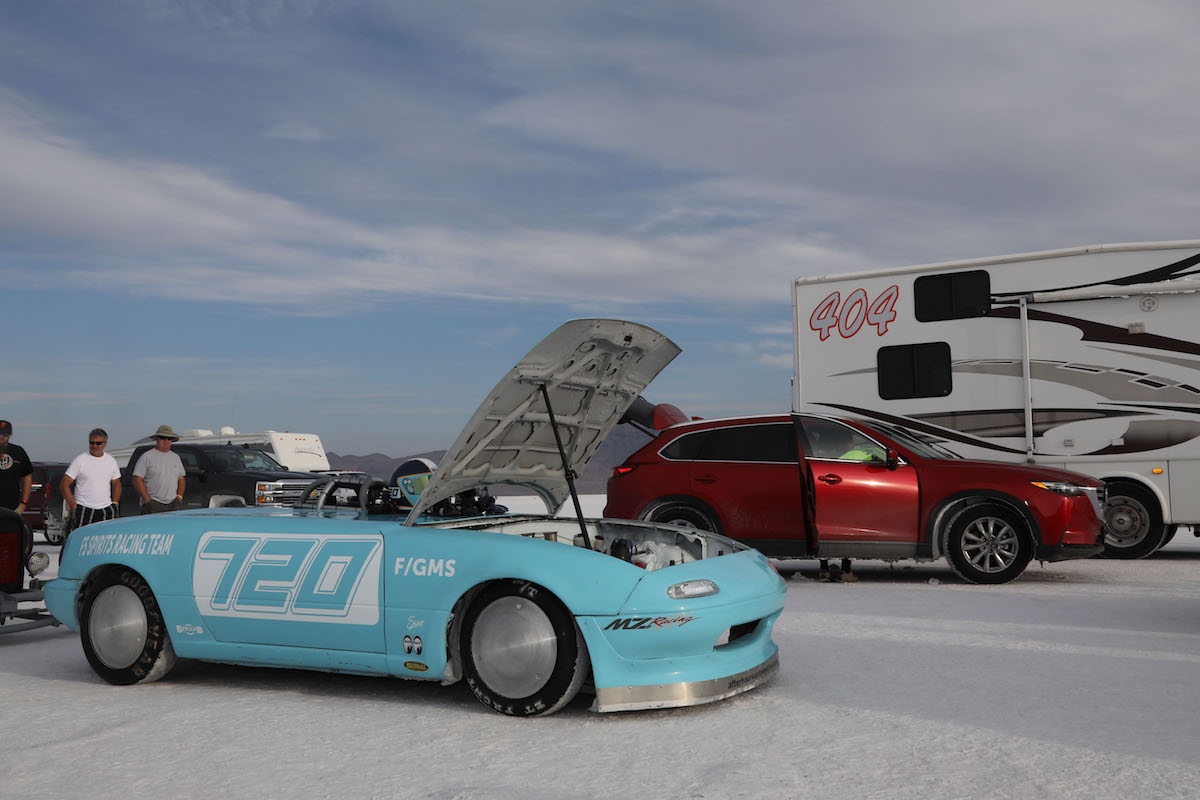 This year the Mazda 13B rotary engine mounted MX-5 Miata will be participating in the Bonneville Speed Week, which will be held in the salt flats of Utah, beginning from the opening ceremony to be held on August 11th. This will be the third time that Sam Okamoto, who resides in the suburbs of Los Angeles, California, to take on the Bonneville challenge. Last year his team had some gaps in their preparation, which resulted in a number of troubles and they came away unable to achieve the target that they had set for themselves. This time around they have made a number of improvements to the vehicle in order to raise the performance and they are aiming to break through the 175mph (280km/h) mark.

Okamoto’s self-made Bonneville machine is based on the 1992 NA MX-5 Miata and is mounted with 13B naturally aspirated engine that was built for the America spec FC3S RX-7 and has been especially tuned in order to take on the speed challenge. Okamoto has already begun preparations based upon reflections from the previous year. To begin with, the peripheral port 13B engine’s Weber carburettor was expanded from 48φ to 51φ to squeeze out a maximum output of 250PS. Along with that, by attaching a blister bulge air scoop to the engine hood he has been able to conduct fresh air directly into the cab. A performance check will be carried out at the El Mirage test field in California prior to the Bonneville Speed Challenge where Okamoto will confirm the setup of the engine system. With the wind shield and A-pillar removed from the original NA Miata, the car’s appearance has become quite simple. However, the underside belly-pan has been extended until the tail with an attached diffuser, while the tail spoiler has been updated and now extends the trunk lid by 10 inches. Along with this, in order to reduce the weight and simplify the system, there are plans to make modifications to have the exhaust discharge from the side of the car’s body. In addition, the radiator will be blocked off and an electric fan installed, along with roll cage fairing, an upgraded suspension unit and so on. Also, by installing a new deceleration parachute, the current speed limit of 175mph (280km/h) has been lifted, making it possible to aim for 200mph (320km/h). While the dryness of the salt flat was a problem last year, it looks as though conditions will be good for this year and the event will be able to progress as scheduled.

Although last year they went out with a minimum team structure, this year a crew chief and local support from Japan will be joining the effort. This year the opening ceremony for the Bonneville Speed Week will take place on August 11th and Okamoto’s team is intending to continue taking on the challenge until the 14th. The Bonneville Salt Flats are scattered around the high altitude Wendover, Utah, and as part of a natural salt flat, was created when a wetland with high salt concentration dried out. On this vast salt flat, that could fit the entire Yamanote-line, four high speed challenges have been set (2-mile, 3-mile and two 5-mile) and the average speed over each mile will be recorded.

Okamoto’s “F-5 Spirits Racing” team is collecting funds for this year’s challenge and is selling T-shirts as part of a crowd funding campaign, with the deadline closing on June 30th. To all those who would like to support this American dream, please support the crowd fund through visiting the following link. It goes without saying that MZRacing will be carrying out on the scene coverage of the challenge.

To contribute >>> Get your kicks on Bonneville Salt Flats