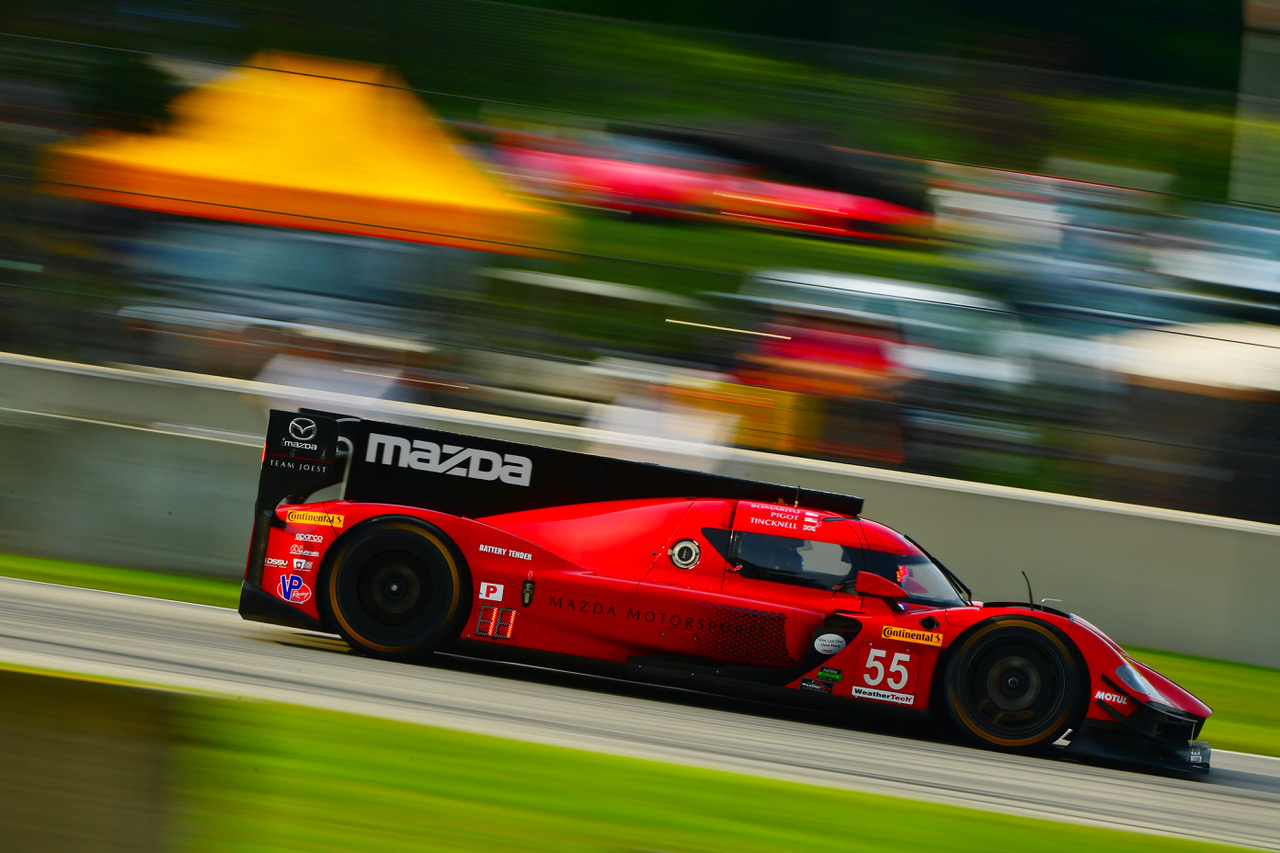 ELKHART LAKE, Wis. (August 5, 2018) – Both Mazda RT24-Ps ran in the top-three of IMSA’s Prototype class during Sunday afternoon’s Continental Tire Road Race Showcase at Road America in Elkhart Lake, Wisconsin with the No. 55 Mazda RT24-P leading the race with two laps to go.

After qualifying in sixth and eighth positions, both the No.55 Mazda RT24-P started by Harry Tincknell and the No. 77 Castrol/ModSpace Mazda RT24-P started by Oliver Jarvis improved several positions during the opening portion of the race. Fuel consumption and tire management would prove to be key issues in the heat of Sunday afternoon’s two hour and forty-minute race and were on the minds of the Mazda Team Joest engineers from the drop of the green flag.

On what would prove to be the final stop for the No. 77 Castrol/ModSpace Mazda RT24-P, which was taken over by Tristan Nunez during the middle stages of the race, a damaged wheel nut slowed the pit stop significantly and dropped the car from podium contention. A decision to be aggressive with fuel strategy with the No. 55 Mazda RT24-P, which was taken to the finish by Jonathan Bomarito, put Bomarito at the front of the field and into the lead in the final laps. However, he was forced to make a splash for fuel with two laps remaining, meaning the No. 55 Mazda RT24-P finished in eighth and the No. 77 Castrol/ModSpace Mazda RT24-P finished in 11th.

The next race for Mazda Team Joest is the Continental Tire Monterey Grand Prix at WeatherTech Raceway Laguna Seca on September 7-9.

“We have always said that we are coming to these races to win. Today, we made a decision mid-race to split the strategy on the cars to give ourselves the absolute best chance for our first victory. Both cars had pace, both cars led the race on different occasions, and both we were in the top three nearly the entire race. For sure, we gambled with the No. 55 and hoped for a yellow, but it never came. The No. 77 was also in the hunt until a bit of trouble on the right front of the last stop. It’s a tough result for everybody, because we all saw our first win only a lap away, but we were very competitive today and we will focus all of our energies on the next race at WeatherTech Raceway Laguna Seca.”

“Given where we were on the track and what the situation was in the final hour, I think we made the right call to maximize our chances to win by gambling on fuel. It didn’t quite work out, but we were close. Sometimes you have to roll the dice and when it works you look like a hero, but it didn’t work for us today. With the heat and the tire degradation, it was a lot of work over the last half hour or so to keep up the pace. The result not be what we wanted but we are happy with the performance, and we’ll build off that for the next one.”

“The result wasn’t what we hoped for, and the guys really deserved a great result today. We knew that we would be battling with tire degradation and fuel consumption, so in a way, saving fuel throughout my stints helped me to save the tires. We were in a good spot with track position and if things had worked out a little bit differently, we would have had a very different finish. It was enjoyable to be in with a shot at a podium today and which would have been an amazing result – especially for the guys who have worked so hard all year long.”

“We had a car and a strategy to win, but what happened was something that was out of our control. All that we can really do is make the best of it and move on to the next race. Like everyone else, the tire degradation was something we had to manage all day, especially with the heat. And when following the other Prototypes we also have to deal with a lot of aero wash, which makes things worse for the front tires, but our setup seemed to make the best of the situation and in clear air the Mazda RT24-P was really good. We’ll press on from here and give it another go at Laguna Seca next month.”

“We had a great race going today, and it’s just a shame that a small problem cost us a chance at a victory or a podium. The guys gave us a great car to fight with and a strategy to win, and it looked really good until that last stop. We were pretty fast all weekend and I knew we would be a factor in the race, and we were. So even though we didn’t get the finish that we expected, we had the best effort that we could, and we are already looking ahead to the next race to get that podium.”