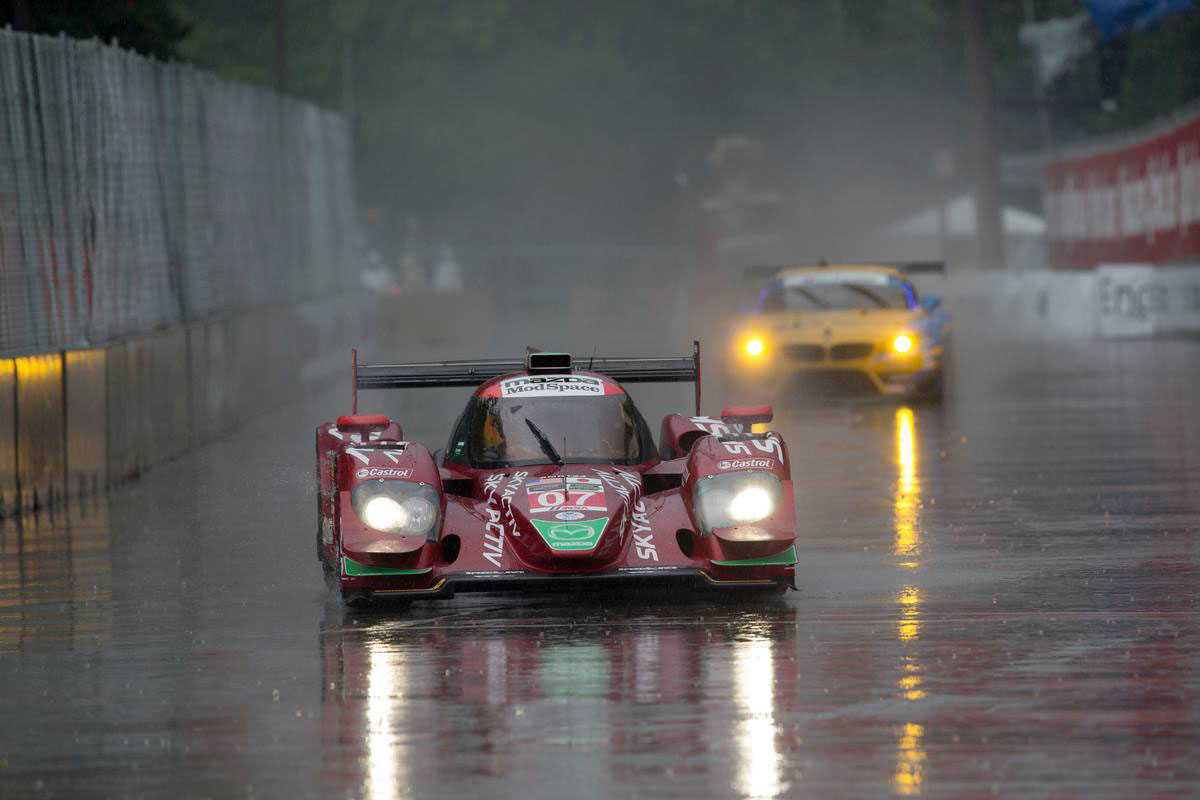 IRVINE, Calif. (May 31, 2015) – Teammates Tom Long and Joel Miller drove the Mazda Motorsports Prototype to an eighth-place finish Saturday afternoon in the TUDOR United SportsCar Series race at Detroit’s Belle Isle. Drivers Dane Cameron and Eric Curran teamed for their first victory in the Whelen’s/Team Fox Corvette to win the 100-minute Chevrolet Sports Car Classic. This is the first lead-lap finish of the year for the Mazda Motorsports team.

Tom Long started the race from the 12th position, then avoided several incidents ahead of him to bring the Mazda to the pit area mid-race. Using pit strategy, the team regained a spot on the lead lap as Long turned the car over to his co-driver. During Miller’s stint, the weather seemingly changed every lap, with varying amounts of rain falling on different areas of the track until finally raining harder in the treacherous final laps. Miller charged from the back of the field on the tight street circuit, passing all of the GT category cars and all but one of the Prototype Challenge cars to earn the eight-place finish.

Tom Long, Driver, No. 07 Mazda Prototype
About the rough track conditions (Miller had said “they aren’t bumps, they’re jumps!”): “We had a great run in the Castrol SKYACTIV Diesel Mazda today. Because of the rough track, we had to really compromise the setup of the car – such as raising the ride height – so it wasn’t ideal. But, we had the right approach to get a decent balance and then worked with the traction control settings to get good grip out of the corners.”

Joel Miller, Driver, No. 07 Mazda Prototype:
“The weather conditions in the last 40 minutes of the race were up and down. It would be raining in a couple of corners and dry in the others. The track didn’t get slick straight away, it gradually got there and then it rained buckets. I was dancing in there for rain. You couldn’t see my feet in the car, but I was doing the rain dance because the Mazda was awesome through traffic, and our pace in the rain brings us closer to the leaders. We passed all of the GT cars and were working our way through the PCs [Prototype Challenge category]. To be able to finish on the lead lap and fighting for position in the final lap was fantastic for the team. It was great stuff and I enjoyed it. We got through the day, and now it’s onto the Six Hours of Watkins Glen.”

The next race event for the Prototype cars is the Sahlen’s Six Hours of the Glen at the Watkins Glen International circuit in upstate New York, June 26 – 28.