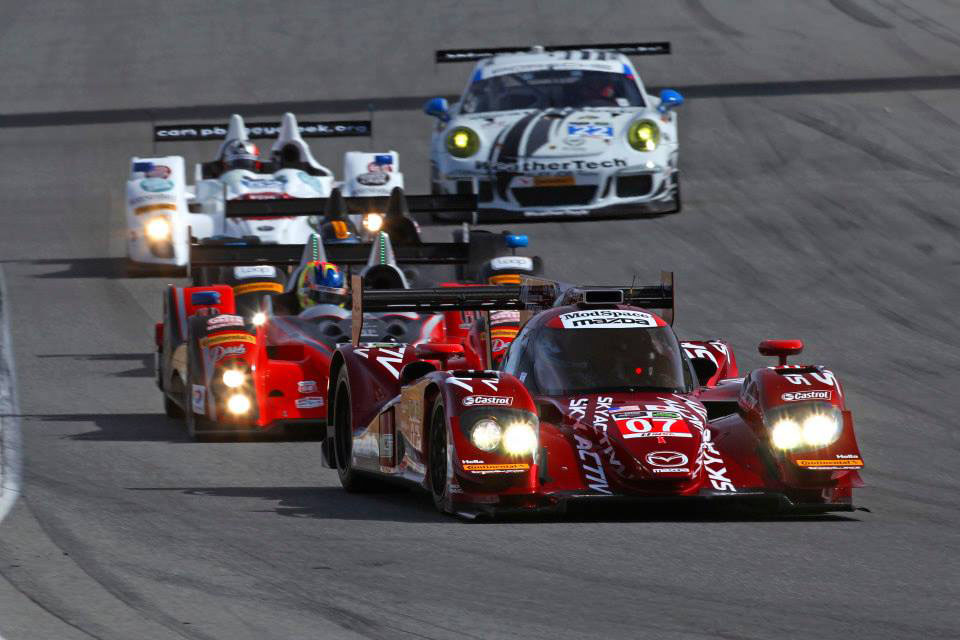 Round 4 of the TUDOR United Sports Car Championship (TUSC) was held at Mazda Raceway Laguna Seca in Monterey, California between May 3rd (Sat) and 4th (Sun) where the #70 Mazda LMP2 SKYACTIV-D Racing (Sylvain Tremblay / Tom Long) finished the race in overall seventh.

Mazda Raceway Laguna Seca is the home track of Mazda USA (whose headquarters are located in the suburbs of Los Angeles) and is a long standing, full scale west coast race track that has attracted the support of large numbers of race fans from big metropolitan cities such as San Francisco. This year the track plays host to a number of large events such as the Moto GP, Rolex Monterey Motorsports Reunion and the TUDOR United Sports Car Championship. A medium-low speed track of about 3.5km, it is famous for “Corkscrew corner” which has a steep 15 meter drop from its hilltop.

This time the powered up version of the SKYACTIV-D diesel engine, introduced at TUSC round 3 at Long Beach, was mounted to both Mazda prototypes. Being Mazda’s home track, the drivers enthusiastically dove into the qualifying sessions. Although the results were an 11th (#07 Joel Miller / Tristan Nunez) and 12th (#70), they reduced their time difference with the fastest prototype cars and the young driver duo of the #07 in particular seemed to appreciate the strong performance of the machine.

A total of 23 vehicles consisting of 12 prototype and 11 LMGT cars simultaneously started the 2 hour race. Keeping pace with the top of the pack, the #07 Mazda LMP2 climbed up to 4th position but unfortunately made contact with another prototype and crashed at lap 31. With significant damage to the bodywork it was forced to retire. On the other hand the #70 Mazda prototype continued to rack up fast paced laps and passed the checked flag in 7th in the prototype class. Mazda USA Motorsports Director, John Doonan remarked, “In the races so far we have been gradually advancing the process of improving the performance of the two Mazda prototypes. We made very significant performance gains in the on-track development of our SKYACTIV Prototypes, running at the pace of the leaders. It’s unfortunate that one of the cars crashed but I’m really looking forward to the next race.”