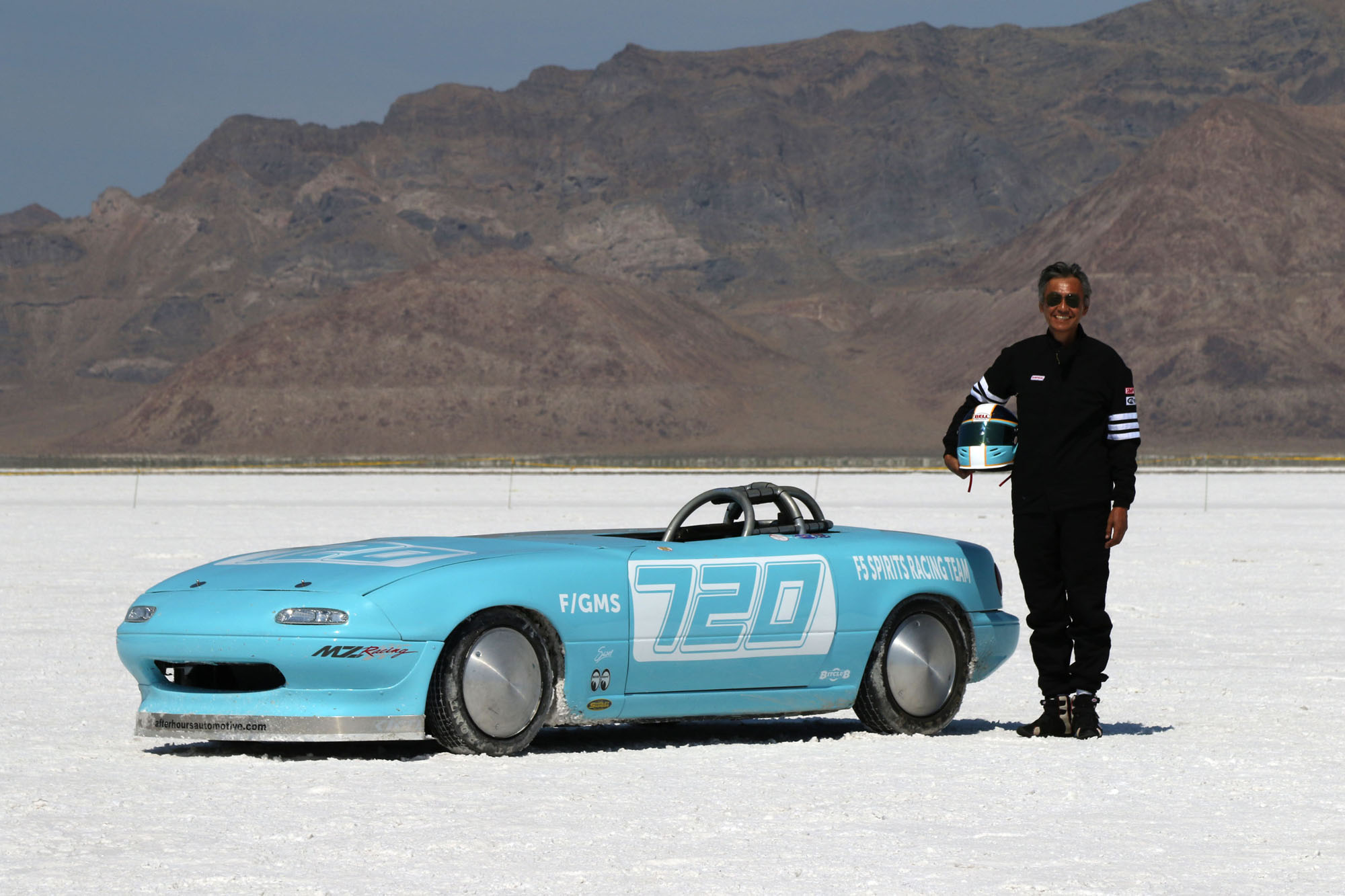 The Bonneville Speedweek was held from August 12th where the RE Miata of Sam Okamoto ran a total of 2 times but was unable to break his personal fastest speed of 151mph (241.6km/h) that he recorded at last year’s event, and thus he plans to again take up the challenge next year.

This biggest hurdle for Okamoto’s first attempt last year was passing through vehicle inspection, but with the cooperation of a number of good Samaritans he was able to make it through. Due to that experience, this time he was able to clear inspection on the day before the opening ceremony and Okamoto and his three-man crew breathed a sigh of relief. However, a new challenge was awaiting them just around the corner. After the opening ceremony was completed, he headed out towards the rookie course to test out their machine, but the rough connection road from the pit area to the starting point damaged the suspension. He dropped a tire into a deep hole in the road and slammed the rear suspension’s upper arm, breaking it. The team spent the rest of that day, when all their friends had come out to watch, repairing the damage and making adjustments to ensure it wouldn’t reoccur. While they were doing this they managed to find a team that had brought along a welder and it looked like they would get the repairs finished in time.

They had a reinforcing plate welded over the broken section and reinstalled the arm and continued work from the next morning. They also adjusted the height of the car as another measure to prevent a recurrence. Despite the fact that the other upper arm was not broken, they discovered evidence of minor damage and decided to reinforce it as well just in case. They were forced to wait for a few hours for the welding they had requested to be completed and for this reason it looked like they would be able to finally get their first run in on the evening of the third day. The reason they would have to wait this long is due to the fact that Bonneville is an expansive pure white salt flat where the temperature during the day reaches 36-38°C. This, along with the fierce sunrays bouncing back up off the ground means that it is just not possible to carry out work during the middle of the day. Not only that, the people they were relying on to carry out the welding were a race team themselves, and so they had no choice but to adjust their schedule to theirs. Moreover, each time a car carries out a speed challenge, a safety checks need to be carried out on the course beforehand, which means that there is always numerous cars lined up in standby waiting for their chance to go. It is not rare for a machine to leave their pits to carry out one run and not return for up to 4-5 hours. Furthermore, the rules state that everyone must leave the salt flats by 8:00pm every night.

Okamoto’s RE Miata is based on a 1992 NA Mazda MX-5 Miata from which he has removed the pillar and front windshield and installed a robust roll cage to protect the driver. To this he installed an NA 13B rotary engine and transmission from a US spec FC RX-7 to create a lightweight and powerful Bonneville challenging machine. The engine was modified to a peripheral intake port spec and with its Weber Φ48 downdraft carburetor, it generates approximately 250hp.

The machine preparation was finally completed by the morning of the third day. The RE Miata arrived at the start line drawn by a Mazda CX-9 that was lent to the team by Mazda USA. They started off with a run on the course of the shortest distance, the Rookie Course. Perhaps because they turned out early, they did not have to wait long and before they knew it, it was time for the real deal. Okamoto roared out the sound of his RE and started his first run. He recorded a 137mph (219 km/h). He went on to say, “The condition of the course was not that great and, despite the fact that it is a straight line, I felt like I could lose all control if I didn’t pour all of my concentration into steering. My goal of reaching 175mph (280 km/h) is quite a tall order but I haven’t given up yet.” However, there was quite a lot of cloud cover on this day and in the afternoon the wind began to get stronger. The team lined up their machine on the Short Course (longer than the Rookie Course) at 1:00pm. Here they waited for 4 hours and, although there were still another 14 cars waiting to run, the course was closed due to strong winds. All attempts were cancelled for the rest of the day.

The team had planned to return to Los Angeles, their base of operations, on the fourth day but they altered their schedule and decided try their hand at the speed challenge from early in the morning. Their chance finally came at 9:00am that morning and the course conditions were better than those on the Rookie Course. Okamoto spiritedly leapt into his attempt but after completing his run the time slip he was handed only displayed a mere 135mph. A clearly despondent Okamoto related, “After 1 mile I was in 4th at 7500rpm. However, when I shifted up to 5th I dropped down to 5,500rpm and, although I was hoping to be able to regain some acceleration I wasn’t able to lift it back up. My driving was probably the problem.” Still, he went on to say, “A lot of areas we need to improve on were made clear to us such as in the aerodynamics and fresh air intake. There are still a lot of things we can work on regarding enlargements around the engine and carburettor. I will be back next year.”

See you next year Okamoto-san!

Photos and text by MZRacing