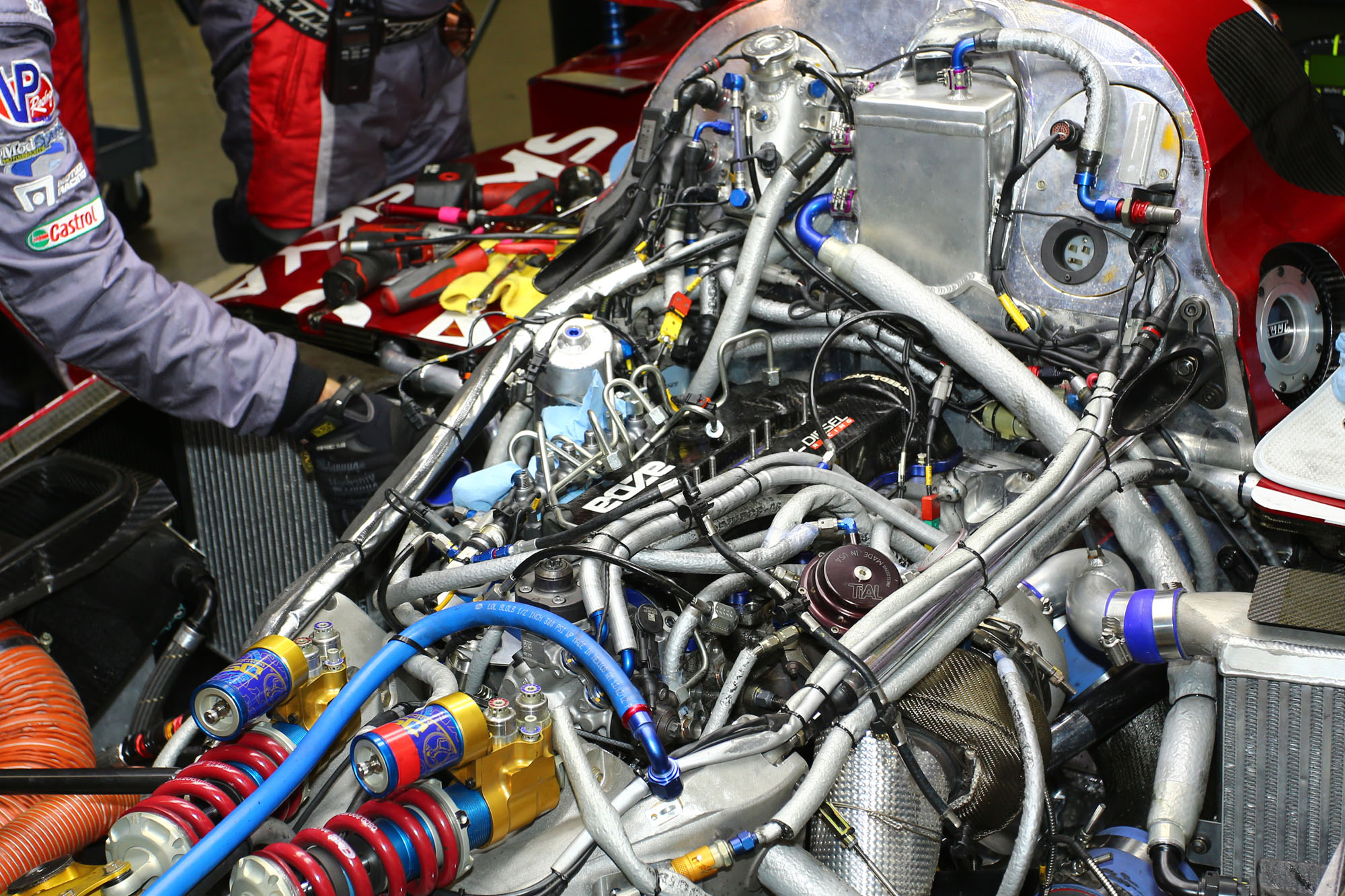 The SKYACTIV-D engine first debuted when it was mounted in the Mazda CX-5. After also being used in the Atenza and Axela it went on to create a whole new category of car in Japan; the “sporty diesel.” Based on this engine, the 2.2-liter DOHC four-cylinder diesel 2-stage turbo SKYACTIV-D racing engine began development in January 2012. In February of the same year production was ceased for the market CX-5 mass production engine and one of these was sent to SpeedSource Engineering so that serious development of the racing version could begin in earnest. This development entailed an engine block that utilized mass produced products. With regards to structural components, the necessary engine durability required to handle the increased power output was improved while avoiding (as much as feasible) the use of replacement materials. Furthermore the valve train system also continues to use the original production parts. Although the conrod and crankshaft are made of replacement materials, the pistons for the first diesel racer, the Mazda 6 GX, are aluminum. The design of the race engine was reinforced and, after they confirmed that it could handle 50 hours of non-stop operation without failure on the engine dyno, numerous test runs were carried out in Daytona mode (consisting of repeated acceleration and deceleration).

However, when the engine first debuted at the 2013 24 Hours of Daytona it ran into successive difficulties and, 3 hours after the start of the race, the 3 Mazda 6 GXs mounted with SKYACTIV-D racing engines were forced to retire. The cause of these problems lay in the amount of vibration within the engine body. These vibrations would often cause the fuel line to bend resulting in fuel leaks. Furthermore, one of the cars experienced internal engine damage brought about by abnormal combustion. As the season had just begun, the teams were faced with the daunting task of simultaneously preparing for races while continuing to develop the engine. To achieve this, experts in engine analysis and materials, as well as diesel engine specialists from both the Mazda headquarters in Hiroshima and the Mazda USA R&D center in California, were dispatched to SpeedSource, the initial base of development, in order to find a solution. This resulted in the shape of the combustion chambers being redesigned to resolve the abnormal detonation issues and, to address the vibration, a number of new concepts being incorporated into the engine and chassis. These efforts paid off and 1 month after Daytona, one of the Mazda 6 GXs carried out a complete run at the Grand-Am second round in Austin. Following this, more improvements continued to be carried, out one after the other, to achieve even more stable performance and the engine went on to achieve 9 consecutive victories in the GX class. Mazda would ultimately shine here as the class manufacturers champion for 2013.

After the 2013 season finished in September, a program was started which aimed at mounting this technology into a prototype car and modifications to the engine body were begun in order to integrate it into the new chassis. To begin with, the lubrication system was reformed and the engine body was altered to enable positioning even lower than in GX chassis. In addition, to increase the cooling capacity essential for the engine’s mid-ship mount, additional pieces were mounted to the water jacket. In spite of this, when competing at the 2014 24 Hours of Daytona, the temperature of the engine could not be effectively regulated and this led to overheating. The SKYACTIV-D engine for prototype chassis has increased the power of the GX engine from 380hp to 450hp. This increase in output has been achieved through the fuel delivery system provided by Bosch. The issues with overheating that have dogged the engine since Daytona are gradually being resolved through adjusting elements such as air-flow control. However, as further increases in output are planned for the future, even greater cylinder head durability will be required. Most likely the only way to confirm this will be through repeated trial and error. With the current 450hp specs the engine as been about 4-5 seconds behind the leading group in qualifying, but when it comes to the final race this difference gets reduced to 2-3 seconds. Being a low-rev, high torque engine, this turbo diesel is much more fuel-efficient compared to V8 machines and it is certain that the Mazda LMP2 SKYACTIV-D Racing will become increasingly competitive in the future.

Owners of Mazda diesel cars such as the CX-5, Atenza and Axela can be proud that they are using the same SKYACTIV-D engine that is going up against the giants of the racing world.