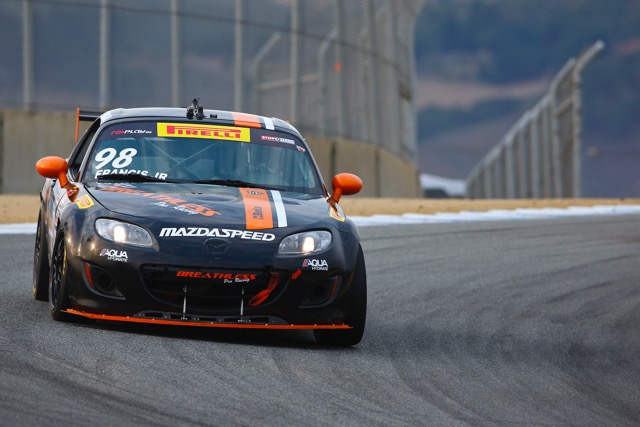 Two Mazdas took class victories in the final rounds of the Pirelli World Challenge, while Mazda took home the manufacturer’s championship in the Touring Class.

Last weekend turned out to be a thriller for Mazda fans. On the first day, September 16th (Fri), of these last rounds of the Pirelli World Championship held at Mazda Raceway Laguna Seca they were able to witness the Mazda MX-5 (Roadster) take victory in the Touring Car class, while the Mazda 2 (Demio) grabbed the win in the Touring Car B class. The Mazda 2 then followed this up with consecutive victories in race 17 on the 12th (Sat) and race 18 on the 13th (Sun), topped off with Mazda taking home the Touring Car manufacturer’s championship after the final round had reached its conclusion.

The final round of the Pirelli World Challenge was held over September 11th to the 13th at Mazda Raceway Laguna Seca. The Pirelli World Challenge is divided into 7 classes with the FIA-GT3 as the top category. Within this frame the Touring Car class held three races from Friday to Sunday with each counting as one round. The series consists of 18 rounds held at 6 courses located within the US and Canada. Beginning with races at Circuit of the Americas, which MZRacing covered in March, the series toured to Ontario CA, Wisconsin’s Elkhart Lake, Detroit Michigan, Lexington Ohio, with the final round being held at Laguna Seca.

#33 Poland began the first few rounds in the Touring Car class with a couple of podium finishes, but from round 4 onwards was struggling to achieve top order finishes and in qualifying for this race, also, could only manage 8th on the grid. However, within the hard fought race, he managed to hold onto his position while other machines were being handed out drive through penalties. At lap 19 of the 20-lap race, he was running in 4th when the top runners engaged in a 3-car battle for the lead. Seeing his chance, he used this opportunity to leap in front of the whole pack to move into the top spot where he passed the checkered flag.

In the Touring Car B class, #47 Jordan would start from the tail end due to being penalized in Qualification, but would pull out a remarkable fight back from the rear to pass #58 Glenn Nixon at lap 16 to take the lead. This would be a consecutive victory following on from round 15 at Miller Motorsports Park, which he topped off with another two wins in rounds 17 and 18.

Looking back on the entire year Ernie Francis Jr. took four wins in the Touring Cars class behind the wheel of the #98 Breathless Performance Mazda MX-5 to place 2nd in the drivers’ championship. Coming 3rd was Poland who achieved one win and nine podium finishes in the season. With this Mazda took home the Touring Car class manufacturer’s championship with an over 40 points margin over 2nd place Nissan. Furthermore Elivan Goulart scored a class win in round 4 at Canadian Tire Motorsports Park in his #23 TechSport Racing Mazda RX-8.

It has been a fantastic year for Mazda and the drivers who race in their machines. We’re looking forward to watching how they perform in the next season.