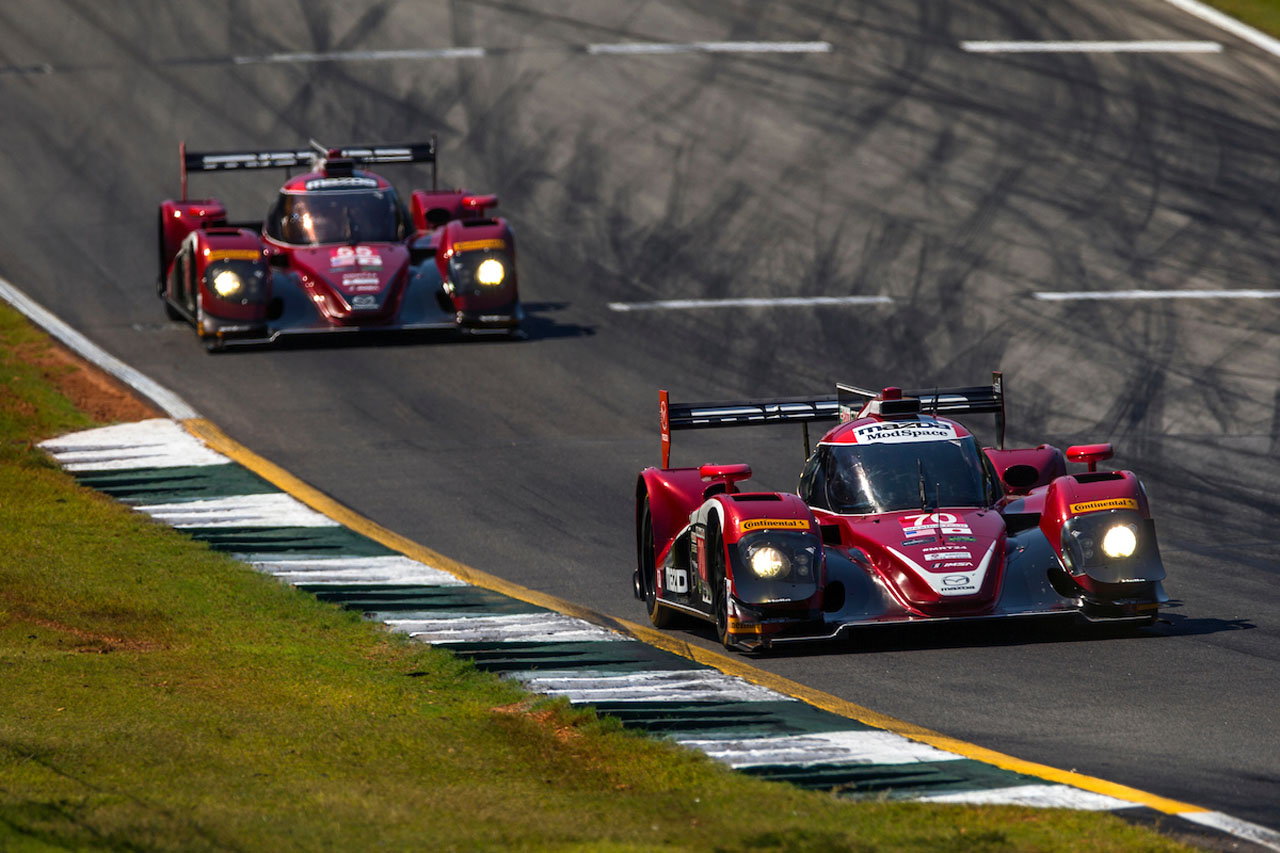 The final round of the IMSA WeatherTech SportsCar Championship, the “Petit Le Mans” was held as a 10-hour race on October 1st at Georgia’s Road Atlanta where the #70 Mazda Prototype (Tom Long/Joel Miller) battled it out within the top 3 for the majority of the race but tragically fell out of the fight with 10 minutes remaining until the checkered flag. A podium finish slipped through their fingers right at the last moment. The soul red #70 Mazda Protorype driven by Joel Miller damaged a fuel injector at the 9 hour, 50-minute mark and this resulted in a fire. After noticing this, Miller drove the car as close as possible to the nearest fire station and the ejected the vehicle. The machine had been performing incredibly well and was running in a good position so it’s quite a tragic result.

With this race the 2016 IMSA WeatherTeach SportsCar series draws to a close and the current race format rules will also finish. From 2017 competitors will be heading out with completely new packages. This season the 2 Mazda prototypes that drove in the series were the last models to be designed by renowned chassis maker, Lola, which has had cars on the front lines of series the world over since 1950. The 10-hour Petit Le Mans is set to be the final professional race for Lola. The Mazda Motorsports USA team is currently developing a new chassis that is scheduled to be announced in November.

This race saw the #55 Mazda prototype start from the front of the grid for the sixth time in 7 races and Tristan Nunez fixed the machine into the top group, after which, at lap 34, he jumped into the lead. However, after two hours had passed his engine misfired and in order to ensure the damage wouldn’t get any worse he went into the pits. Here they replaced the ECU and the fuel sensors. Spencer Pigot then took the wheel to go back out into the race but once again the car experienced some problems and was forced to leave the course and retire. As for the #70 Mazda prototype, which had been running in 5th, it had made an irregular pit stop that saw it fall briefly down to 7th place. Knowing that Pigot was feeling frustrated at only having been able to drive the #55 Mazda prototype for a few laps, the team let him act as a pinch hitter for the #70 and the young driver was sent back out onto the track. Here he increased their pace and came out on top of an exciting battle with Ricky Taylor, which pushed them up to 2nd before he ultimately grabbed the lead at the 1 hour, 15-minute mark. After that he went into the pits and handed the car over to Miller, but a fire broke out and they were force out of the podium sphere.

John Doonan, Director, Mazda Motorsports of North America, related “There is a challenger spirit at the heart of the Mazda brand and in every team member of our Motorsports program. Unfortunately, when it comes to the season finale for the IMSA WeatherTech SportsCar Championship, that spirit was tested. I am so proud of every team member, the strategy decisions from the pit box and the amazing stints put in by our drivers. One of these days their efforts will be rewarded with victory, I am sure of it, and we will never stop challenging ourselves.”