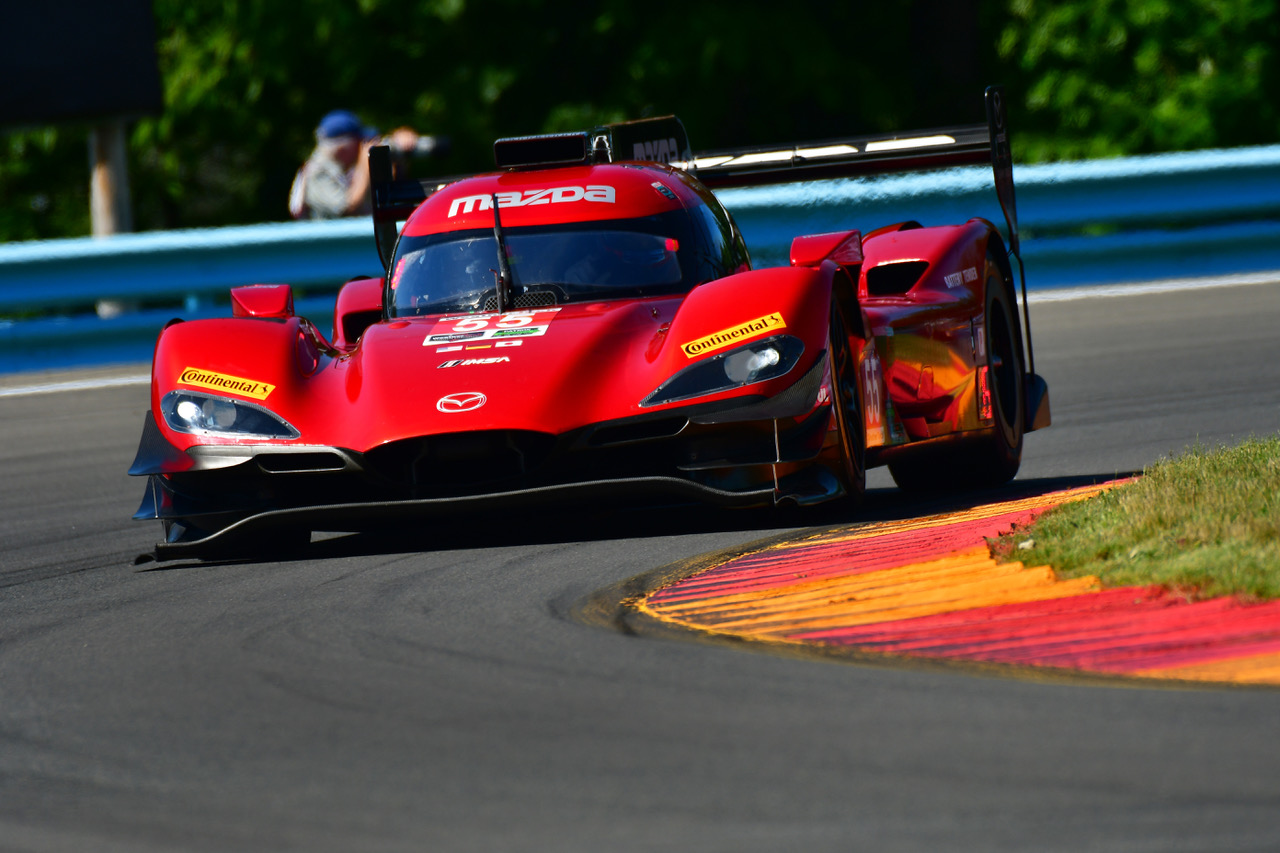 Driving the No. 55 Mazda RT24-P, drivers Jonathan Bomarito, Spencer Pigot and Harry Tincknell moved the car forward during the first half of the six-hour race at Watkins Glen International, which is the third round of the North American Endurance Cup. As different pit sequences played out in the middle stages of the race, the No. 55 Mazda established itself in fifth position until a full-course caution period fell just as the team was about to pit, forcing the team to do an emergency service. That dropped the car down the running order under caution, and a later pit-speed penalty cost additional time in the race’s fourth hour.

At the checkered flag, Tincknell brought the car to the finish in tenth position and on the lead lap in the Prototype class.

After an incident in practice for Rene Rast, members of Mazda Team Joest and Multimatic worked throughout Saturday to rebuild the No. 77 Castrol/ModSpace Mazda RT24-P driven by Oliver Jarvis, Tristan Nunez and Rast in time for for Sunday morning’s warmup. Starting from the back of the field, Olivier Jarvis narrowly avoided an opening-lap incident involving several other Prototype class and moved up through the field before handing the car over to Rast. The car then encountered an electrical issue, forcing it to spend time in the paddock for repairs.

The No. 77 Castrol/ModSpace Mazda RT24-P finished the race in thirteenth position.

The next round of the IMSA WeatherTech Sportscar Championship will be in one week’s time at Canadian Tire Motorsports Park in Bowmanville, Ontario.

“Mazda is rooted in a challenger spirit like none other and we simply will not give up, no matter what we face. We rebounded after the practice incident to have both cars on the grid. The race threw a bunch at us as well, but we fought our way to fifth at one point through strategy. Clearly, we had a tough weekend but there is no time to waste as we turn right around and go to Canadian Tire Motorsports Park. We sure hope to contend for a victory there, and we will bring every bit of effort we need in order to win.”

“We were anticipating that today would be challenging, and the high heat made it a bigger challenge not only from a physical standpoint but also from a setup and tire degradation standpoint. But we had a pretty good first half of the race, the strategy was good and the Mazda RT24-P seemed to be working pretty well in the heat. Unfortunately, the final results weren’t what we were looking for but we get another shot at it in just a few days at CTMP.”

“I always look forward to coming back and racing with Mazda Team Joest, especially on a fast track like Watkins Glen. I was optimistic about our chances based off my last couple of races with the team at Sebring and Mid-Ohio, but things didn’t work out for us today. The Mazda RT24-P worked really well and I was able to make up a few positions. I know the guys will be pushing hard next week at CTMP and I’m looking forward to getting back in the car at Petit Le Mans.”

“We definitely faced tough circumstances today in Watkins Glen, but we had a good run going until we were caught out by that yellow flag and had to do the emergency service which was almost like taking a penalty. A top-five was definitely possible before that, thanks to the great stints by Jonathan and Spencer, but after that we just lost too much time and track position to make it back up. We’ll aim for a better finish in a week in Canada.”

“It’s really too bad that the guys weren’t rewarded for all of their hard work in getting our car put back together for the race today. They were here until late and the car was really good right out of the gate in morning warmup, but we needed to have good strategy and a little bit of good luck to get us near the front. Unfortunately, that wasn’t how our race went, but we will be back in the car in a couple of days and will push as hard as we always do when we get to CTMP.”

“Today was a really challenging day, there’s no question about that. But the guys worked so hard to get the car back together yesterday, it makes us as drivers want to push even harder to reward them for their hard work. Since that didn’t happen today, we’ll push just that little bit more at CTMP next weekend.”

“I really enjoyed driving at Watkins Glen for the first time, and the crew did a great job to rebuild our car after my incident on Saturday. The car felt good in the warmup and the race started pretty well for us until, unfortunately, we had to spend some time in the pits. After that, the car was great, but then we had to come to the paddock so the guys could fix an electrical issue that we had. It’s a shame, because the team deserved a good result after repairing the car yesterday.”