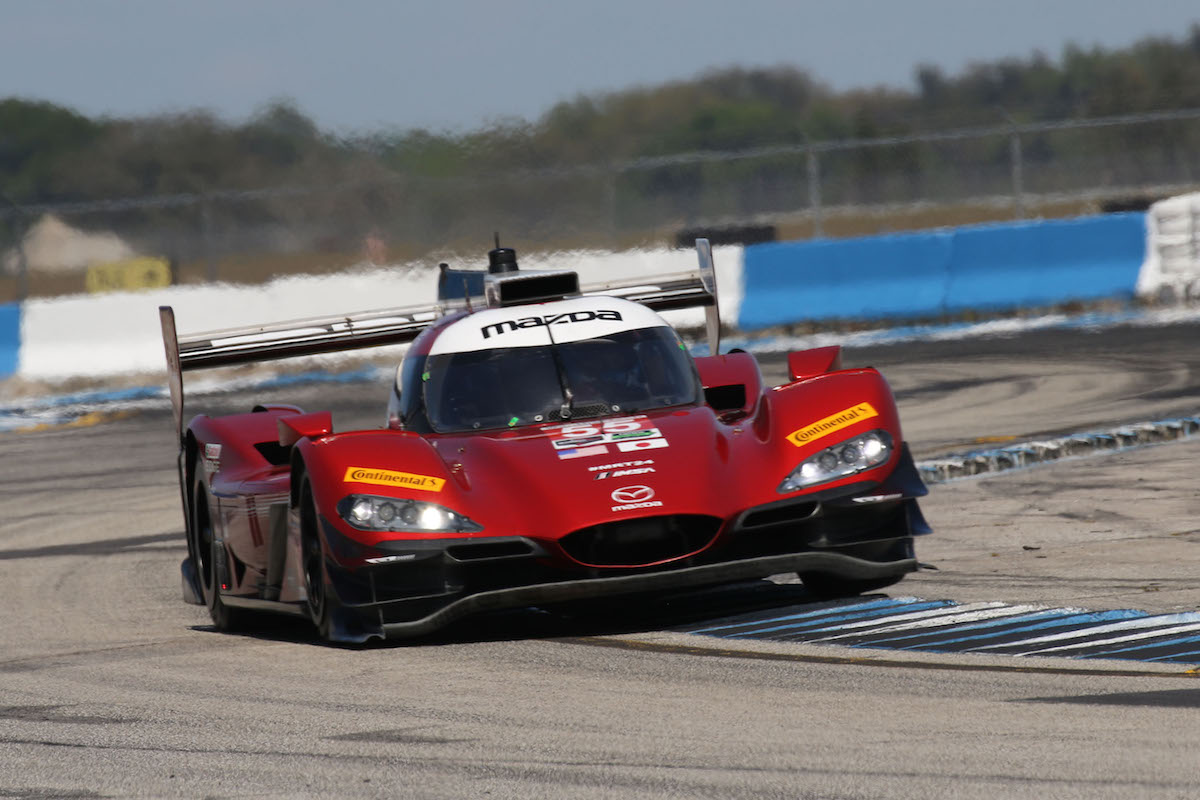 The 65th Annual Mobil 1 Twelve Hours of Sebring was held at Florida’s Sebring International Raceway on March 18th (Sat) and the two RT24-P prototypes from Mazda USA competed. The #55 (Jonathan Bomarito, Tristan Nunez, Spencer Pigot) finished a hard fought race in class 5th. On the other hand, the #70 (Joel Miller, Tom Long, Marino Franchitti) were forced to retire due to suspension trouble.

The 12 Hours of Sebring, held mid-march every year in central Florida, is known to be a sweltering endurance race. Although the mornings and evenings would be somewhat chilly at around 15°C, during the day, when the sun reached its peak, the air temperature would climb to between 26°C to 30°C. Furthermore, due to this circuit incorporating parts of Sebring Regional Airport, there are many portions that consist of hard concrete and asphalt connections, which makes for a bumpy road surface and uneven friction coefficient. Due to this it is very difficult to adjust the car settings to keep the grip consistent and deal with the impacts endured when driving over the track connections of varying heights that would suddenly cause a loss of traction and almost throw the car off into a spin. In the opening round, the 24 Hours of Daytona, the newly debuted Mazda RT24-Ps were unable to pass the finish line of their first race. For that reason the teams’ goal was to make it to the end of the race and aim for a top order finish.

Sebring is close to the team’s HQ and when running the new machines in development tests last year they were achieving solid lap times. However, this time the air and road temperature were significantly higher and this made for some difficult developments for the turbo RT24-Ps in official practice. Even so, in the night session, when the temperature was lower, the cars were recording times there were inching in on the fastest lap. In the official qualifying session held at 2:00pm on Friday, when the temperature was at its peak, and the RT24-Ps were suffering from a loss of traction in the corners, the #55 and #70 qualified 8th and 10th respectively.

Mazda USA’s Motorsports Director, John Doonan stated, “It’s a long race so you don’t know what can happen. We’ll see how much we can demonstrate our performance in these tough conditions.”

Early into the race the #55 unfortunately developed a flat spot in a tire and was forced to pit. Things were looking turbulent right from the get go. Then, at the 1 hour, 10 minute mark, the Miller driven #70 crashed head first into the tire barrier. Fortunately, Miller was unscathed and the machine was able to be put back out on the track with a nose replacement and components check. It was later discovered that the cause of this crash was a right-rear brake failure. With this the #70 fell quite far to the rear of the pack. Despite the #55 struggling with a lack of grip, it gradually managed to push further up the order and was running in overall 5th in the early stages of the race. However, after 3 hours the car’s water temperature rose significantly. It was discovered that there was a coolant leak and this was repaired in the garage. After both machines had returned to the course, the air and road surface temperature began to fall and they were both able to steadily increase their pace. However, from around 6pm the #70 began to show a tendency to misfire. The team attempted to resolve the problem through replacing the ECU and data but this did not result in a drastic improvement and the car was forced back to the garage. It was then that the team discovered that the car had a crack in its suspension. This was most likely caused by the crash that it suffered earlier in the race. As somewhat of silver lining it was fortunate that the issues with the power unit allowed them to discover the suspension damage before it resulted in a potentially more serious accident. Although the #70 was forced to retire the team had managed to avoid a dangerous situation.

The #55 continued to race at a high pace and weaved through the GT cars, one after another. Despite dropping temporarily down to 8th, it managed to rebound back to 5th place and with anchor driver, Nunez behind the wheel it passed the checkered flag after 12 hours of hard fought racing.

These new machines have been having some rough sailing in their first real tests and have yet to take home the results that many had hoped. That being said, every era of a new machine tends to meet with initial difficulties and the cars are gradually getting faster. We Mazda fans will have to be patient and watch with anticipation the development of the Mazda RT24-P. Please stay tuned for the next round at Long Beach!