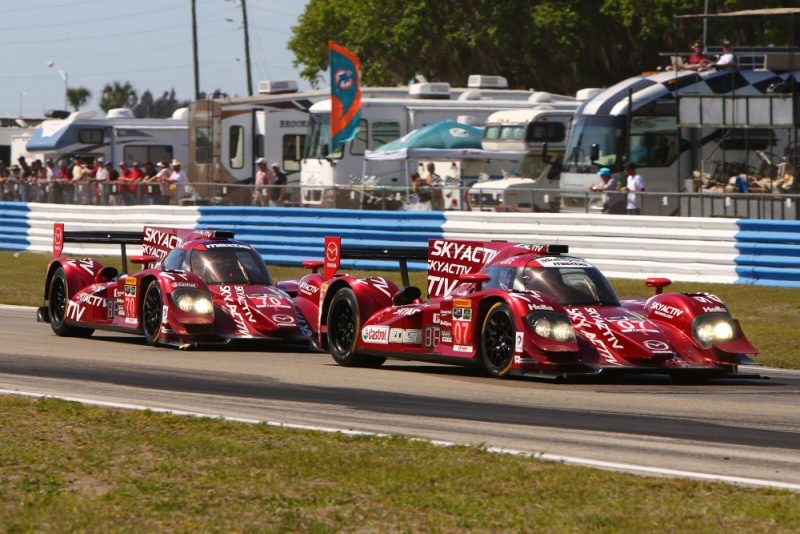 On March 15th (Sat), round 2 of the TUDOR United Sports Car Championship, the Sebring 12 hour race, held its final race and the #70 Mazda LMP2 SKYACTIV-D (Sylvain Tremblay / Tom Long / Ben Devlin) of SpeedSource, the official team of Mazda USA, crossed the finish line, achieving its first complete finish and coming in 11th place out of the 17 cars in the prototype class.

Unfortunately, the team lost its other car, the # 07 Mazda LMP2 SKYACTIV-D (Joel Miller / Tristan Nunez / Tristan Vautier), to suspension trouble at the 5 hour mark. Although on the previous day the #70 Mazda prototype was unable to run satisfactorily due to problems with the intercooler pipe seal, it showed excellent condition during the 25 minute free practice session held on the morning of the final day’s race and managed a trouble free run for the rest of the race’s 12 hours. With a pit stop count of 11, compared to other superior prototype cars which need to stop 12-13 times, the fuel efficiency of the Mazda is clear. However, just before the 12th hour, the car made one more pit stop just to be on the safe side. If they hadn’t taken this precaution the car most likely would have finished in 10th. The consistent speed of Ben Devlin, who joined the team beginning with this race, was conspicuous. He made the most of the experience he had attained during his days in the American Le Mans Series driving the Dyson Racing Lola Mazda (2 liter petrol turbo).

Mazda USA motorsports director, John Doonan, said “Although we were able to achieve a complete finish in our second race debut, this is only just the first step. Our goal isn’t to merely just finish, it is to be a top competitor. To take full advantage of the special characteristics of the SKYACTIV-D engine, we need to continue development and acquire speed as fast as possible.”

The next round of the TUDOR Championship (TUSC) will be held at Long Beach (California) on April 12th (Sat).