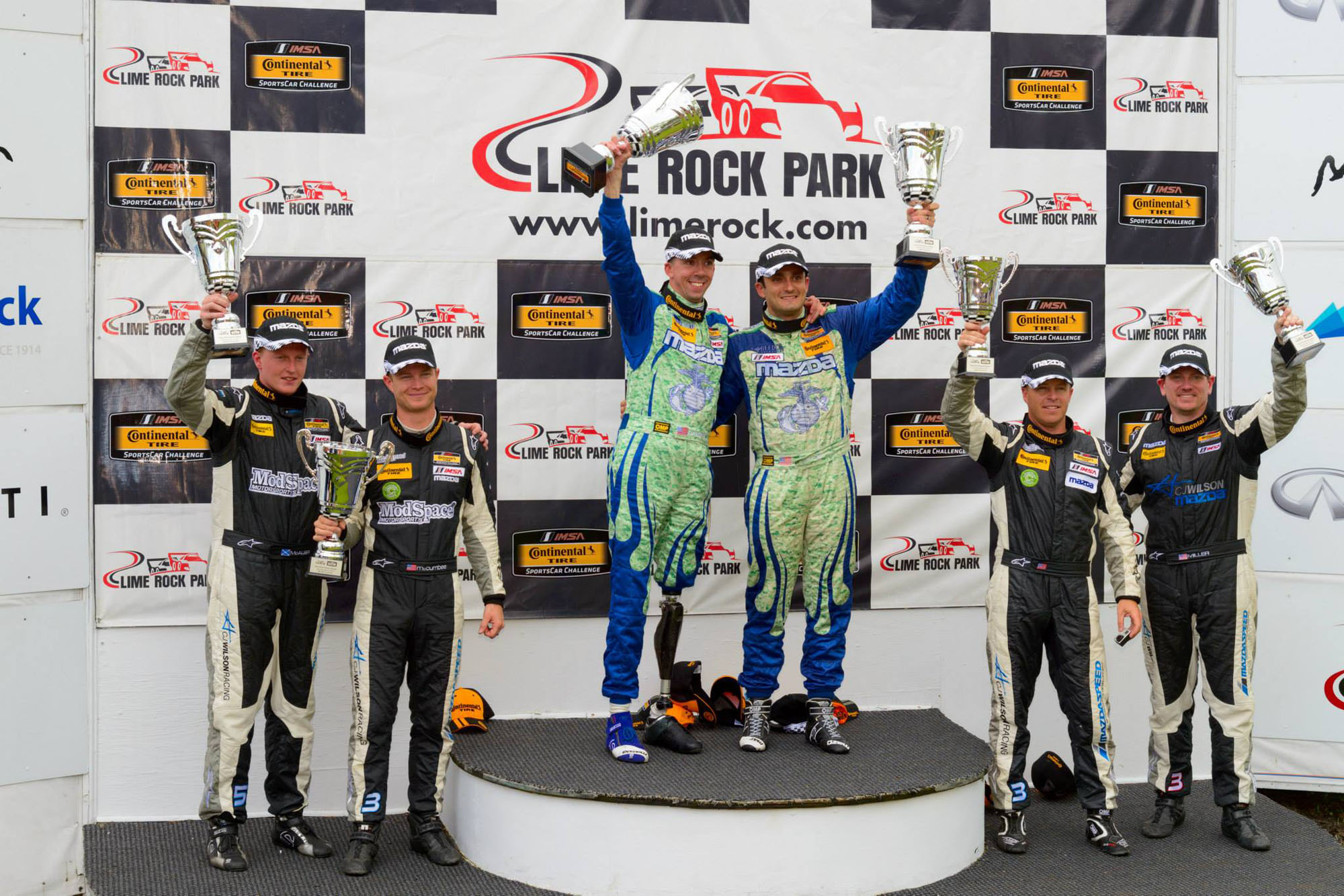 May 24, 2014. All wins are special. A few are magical. Thanks to outstanding performances by Freedom Autosport and CJ Wilson Racing, it was the second straight Mazda MX-5 Miata 1-2-3 podium sweep in the Continental Tire SportsCar Challenge Street Tuner race this weekend. The magical part relates to the winning drivers and car.

Co-driving the winning car was U.S. Marine Staff Sgt. Liam Dwyer. Three years and two days ago, Dwyer lost his left leg when he stepped on an IED while serving in Afghanistan. Today, in just his second professional race, he tasted the winner’s champagne. Co-driving with Dwyer was Tom Long, spending his ‘off weekend’ from racing the Mazda SKYACTIV-D Prototype in the TUDOR United SportsCar Championship.

For the Freedom Autosport team, it was their third win in a row. Making this win extra special, beyond having Dwyer behind the wheel, was the fact that the car had been built in less than three weeks to repair accident damage, and had never turned a wheel prior to practice on Friday morning.

While Long and Dwyer ran top-ten times in practice, rain cancelled qualifying and grid positions were determined by championship points. With their first race being a DNF at Mazda Raceway, Dwyer started from the back of the competitive 33 car Street Tuner field. During his opening stint, Dwyer ran competitive laps and moved the car forward almost ten places. The team chose to pit early when a full-course caution came out. This allowed the team to do the required driver swap, the exchange being complicated by Dwyer’s prosthetic leg being attached to the clutch pedal.

After the swap, Long continued the move forward, taking the lead by lap 68. The remainder of the race was a three-way battle between Long and the CJ Wilson Racing Mazda MX-5s of Stevan McAleer and Marc Miller. Long survived an off-road moment and a half-spin, and managed to optimize his fuel efficiency to avoid the need for late race stop which slowed many of the competitors.

Quotes:
Liam Dwyer: “This was a storybook ending to a fairy tale that even Hollywood couldn’t make up. So many people at Freedom Autosport, Long Road Racing, and Mazda made this opportunity possible. The Mazda MX-5 was clearly the best car here at Lime Rock. My whole goal was to get the car to Tom in one piece, such that Tom could content for the win. I can’t thank Tom enough for being a great coach, phenomenal driver and a friend who believed in me.”

John Doonan, Director of Mazda Motorsports: “As our recent Mazda ads have said, it all comes down to Courage, Creativity, and Conviction. Today at Lime Rock, we had a Mazda story that covered all three. For those who knew the backstory, it brought tears to our eyes.”