The Mazda RT24-P Encounters Misfortune With the Podium in Sight 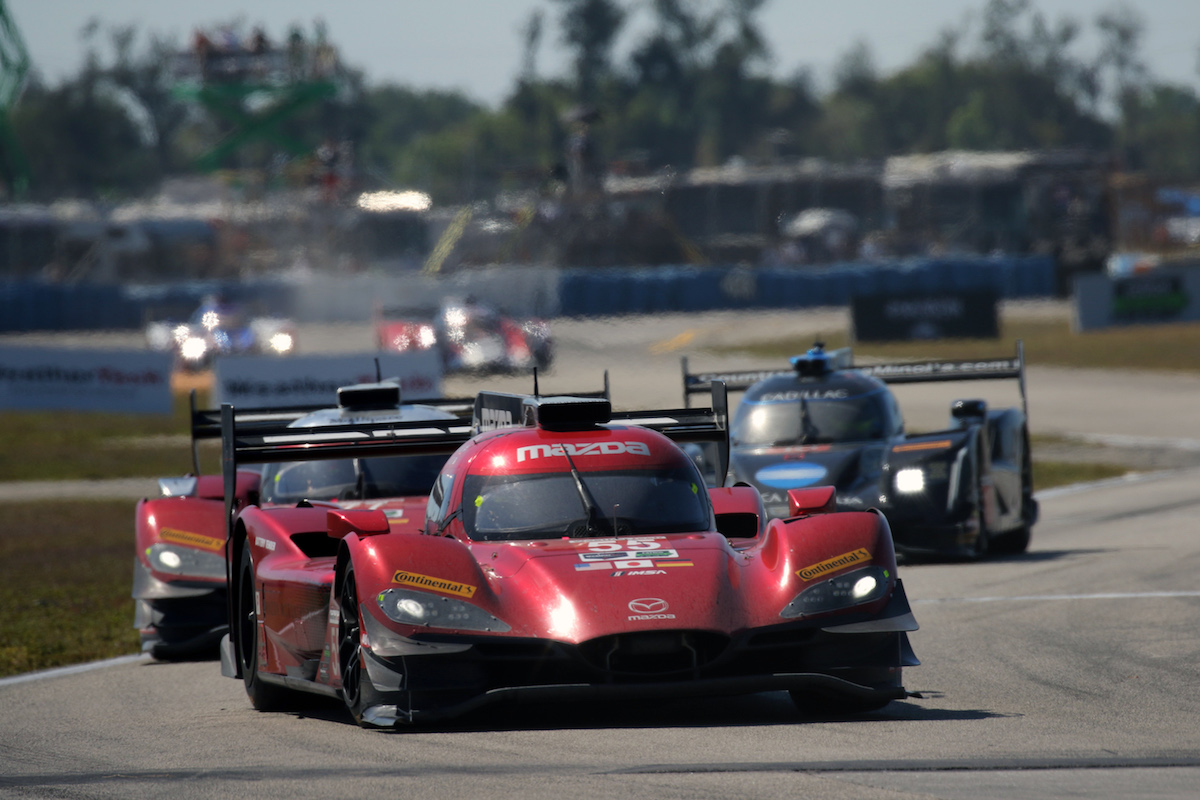 Round 2 of the IMSA WeatherTech SportsCar Championship, the 66th Mobil 1 Twelve Hours of Sebring was held on St. Patrick’s Day, March 17th (Sat) where Mazda Team Joest’s #55 Mazda RT24-P finished 6th and the #77 8th. The #55 was battling with the leading Nissan DPi that ultimately won the race right up until its last pit stop but unfortunately experienced battery trouble at the closing stages of the race. In addition to vying for a top placing finish, the team also recorded the fastest lap of the race, clearly demonstrating the speed of the Mazda RT24-P.

The two Mazda RT24-Ps placed 7th and 9th in the previous day’s qualification but upon post-race technical inspection a violation was discovered that saw them being dropped down to starting the race from 15th and 16th. Although applying transparent tape to the surface of the body to somewhat reduce of an uneven road surface is commonplace in the WEC, it is against the rules in the IMSA. However, immediately after the race began on Saturday at 10:40am, both cars rapidly fought back to the top group with the #55 RT24-P (Jonathan Bomarito / Harry Tincknell / Spencer Pigot) rising up to 6th and the #77 RT24-P (Oliver Jarvis / Tristan Nunez / Rene Rast) moving into 9th place. Unfortunately, the #77, which had risen up to just behind the #55 at the 3-hour mark, began to experience braking trouble. Returning to the pits to repair the problem, it lost a lot of time and fell back to 15th.

After that, the #55 continued to chase down the leading cars and by the race’s midpoint it was even running in the top spot. With the team’s rivals pitting at different intervals, the #55 would swap positions from 1st, to 6th, to 1st, to 5th, to 1st again and then 3rd. In reality the #55 was closing the gap with the leading #22 Nissan DPi and one hour before the race finished it had reduced the difference to 6 seconds. Throughout the 344-lap race, the #55 was running in the lead for a total of 58 laps. With approximately 45 minutes remaining in the race at 10pm, the #22 Nissan DPi and the #55 Mazda RT24-P pitted at almost the same time. With driver, Tincknell remaining in the driver’s seat, the team rapidly refueled and carried out a tire change, and the #55 was set to pit out almost simultaneously with the #22, but the engine did not start immediately. The crew hurriedly pulled the car back and managed to restart it but this saw the #55 fall out of the fight for the top spot. From then on, the car pushed hard at a pace that often surpassed that of the #22 but this was to end in misfortune. The #55 crossed the finish line in 6th place. The cause of the trouble was a malfunction in the car’s battery. On the other hand, the #77, which had dropped down to 15th in the opening stages, was able to fight back as the race progressed and ultimately finished in 8th. This saw Oliver Jarvis record the best lap that went into the books as the fastest lap of the entire race.

“It was an incredible day for Mazda Team Joest. If someone had told me we were going to be competitive, lead as many laps as we did, set a new track record and jump everybody on pit stops and fuel range I don’t think I would have believed them. I’m very proud of how the team and all of our technical partners performed today – it was a big step forward from Daytona. We dealt with a lot of adversity today, but I couldn’t be more proud of the way our drivers drove and the way the guys over the wall performed. It stings a bit to have a potential win snatched away from us right at the end, but we definitely made everybody stand up and take notice.”

“To be in fourth position on the restart with 40 minutes to go at Sebring is what you train and live for, so it was amazing to be in contention. Mazda Team Joest has done an unbelievable job to turn the car around and I can’t thank them enough to be in the car at the end of the race fighting with the best of the best in Prototype. Even before the start of the season I thought the Mazda RT24-P could definitely win races this year, and we nearly won this one. We are a bit dissapointed at the moment, but there are massive positives to look forward to the rest of the year.”

“We had pace in the car and we kept pushing to see whether or not we could come back from our defecit. My teammates had done some quick laps, so I wanted to see if I could do one as well and I was lucky to get a clear lap. But as you can see, we had a great Mazda RT24-P today. It was really competitive and a huge step forward from Daytona and I think any issues we have can be solved pretty quickly. Big thanks to Mazda Team Joest as they’ve worked so hard to allow us the ability to race like we did today. We showed everyone that we have the performance and potential to win.”