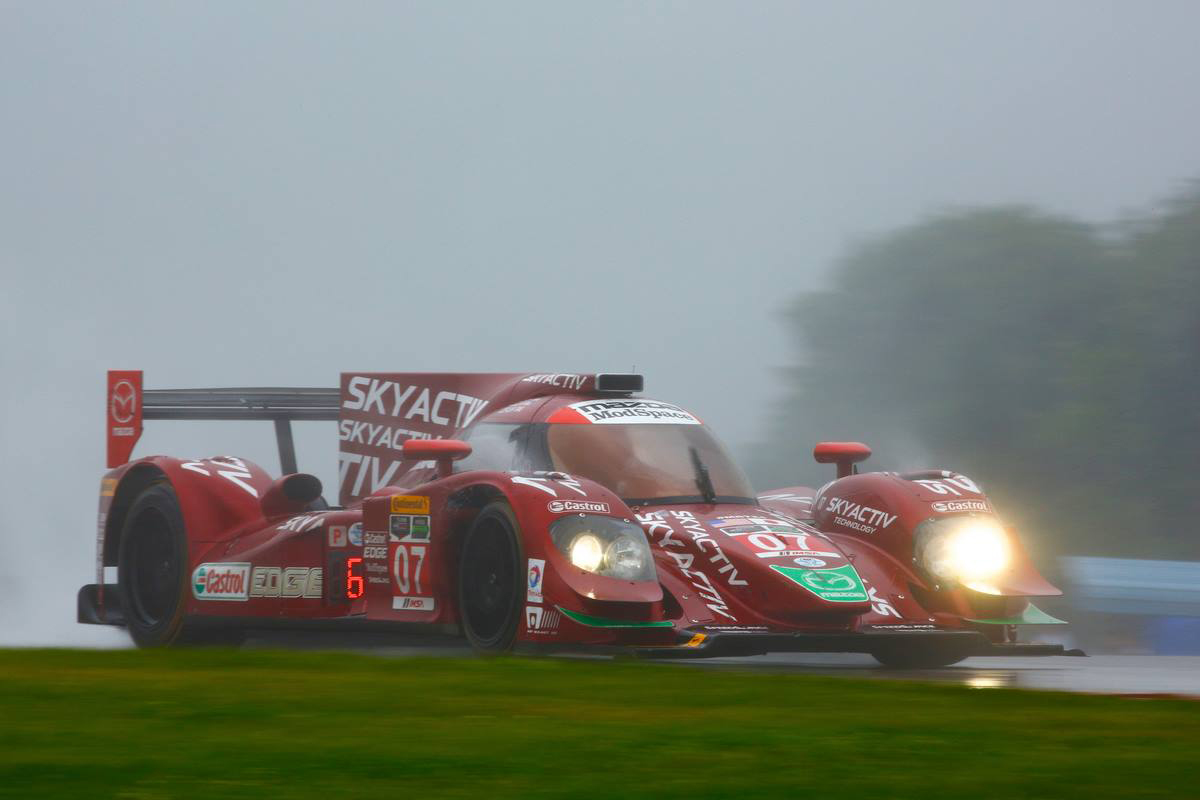 IRVINE, Calif. (June 28, 2015) – When driver Joel Miller took the checkered flag to complete 144 laps of the Watkins Glen International race course, it moved the Mazda Prototype team into fifth place in the Prototype class. Fifth is the best-ever Prototype class finish for the 2.2-liter SKYACTIV diesel engine in the TUDOR United SportsCar Series. The Sahlen’s Six Hours at the Glen was run under dark skies, with varying degrees of precipitation from light drizzle to torrential downpours, and was won by the Corvette Daytona Prototype driven by Richard Westbrook and Michael Valiante. The Glen marks the sixth of ten races in the TUDOR Championship season.

The day didn’t start with promise, as the Prototype came to a stop on-track when the alternator belt broke. The car was pulled behind the pit wall, the crew changed the belt and the No. 07 car returned to the race action a number of laps behind. Despite the set-back, the team persevered, slowly moving up in positions as other Prototypes had trouble, moving into fifth on the final lap.

Tom Long, Driver, No. 07 Mazda Prototype
Long drove the opening two hours and 45 minutes of the race: “The track was very slick at the start. It was a light rain, and the car didn’t feel good. But, as the track dried, we really picked up the pace and showed the kind of speed we had shown in practice. I knew the guys (co-drivers Ben Devlin and Joel Miller) would have a good car the rest of the race.

About the broken alternator belt: “We got an alarm in the cockpit, but we thought it was a false reading at first. But, as I entered the Bus Stop (segment of the back section of the track), it just shut down. I’m really glad I’ve been working out because it was really difficult to steer without any power steering. After almost three hours in the car, your neck does start to feel the effects. It’s like my head is bobblehead doll right now (laughs).”

Ben Devlin, Driver, No. 07 Mazda Prototype
Devlin drove the middle segment of the six-hour race, while light rain came and went: “I was pleased that the car and the engine felt good. It was difficult to judge how hard it was raining from one lap to another, but I was really comfortable, and we were easily moving past the GT traffic. The car was nimble and handled well. The team had a great set-up to start the weekend, and the car and the engine were really strong – certainly we were as happy with both as we’ve been all season.”

Joel Miller, Driver, No. 07 Mazda Prototype:
Miller finished the final two hours of the race, which was primarily run in heavy rain: “Rain driving is always fun. Our SKYACTIV diesel, it just trucked through the slippery spots. I’d put it in third gear and it tracked right through! Fantastic. The visibility today was probably the hardest part of the wet conditions. It was terrible, but it was the same for everybody, so we did what we needed to do and stayed on the pavement. No marks on the car!”

“We got the first top-five for this program, and it was a good day for Mazda. Watkins Glen is just a blast to drive in the dry, and you really have to drive it when it rains. What a fantastic day for our crew – they’ve been working and putting in so many hours and I’m happy to reward them with this finish.”