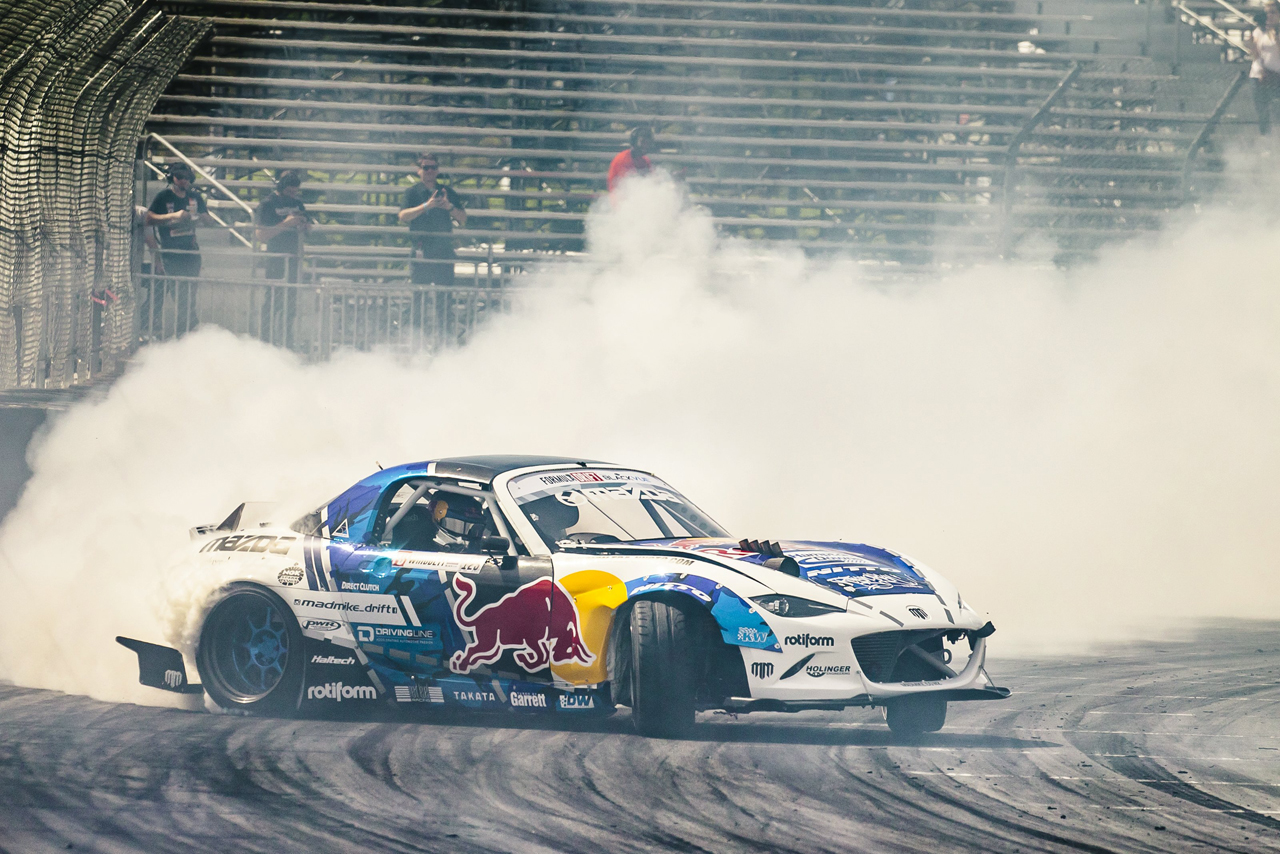 This year “Mad” Mike Whiddett competed behind the wheel of a 4-rotor, twin turbo FD3S RX-7 (nicknamed “HUMBUL”) at round 3 of the Formula Drift (FD) World Championship held in May at Ebisu Circuit, Japan where he went on to take overall victory. After 6 races Mike is currently sitting as point leader in the 2016 world standings. Along with “HUMBUL,” Mike has another beloved beast, the Mazda MX-5 based “RADBUL.” Although this “RADBUL” debuted as a unique machine that sports the appearance of the latest ND MX-5, it is actually based on the NC MX-5 that he used to compete in the FD World Championship last year. The awesome appearance is achieved through grafting the ND rear end panel and nose onto that base and this new version is aptly named, “RADBUL GEN2.” Let’s take a closer look under the hood of “RADBUL GEN2” to see how she ticks.

When we spoke to Mike earlier this year regarding “RADBUL GEN2” he told us, “Underneath, the platform retains pretty much the same specs as last year… [which was] the first development year of the [NC]. We gathered a lot of data, [progressed a lot with the] development and had a lot of success with that chassis… We [had also] already developed a lot through the [BADBUL] RX-8 [that] runs a very similar sub frame. So we didn’t want to change too much in that area… As for the [4-rotor twin turbo] engine, it is the same really. [Last year] we were running well over a 1000hp. But not really pushing it. It was running at only 19-pound boost (approx. 1.3kg/cm2）, so it was a pretty reliable setting.”

Mike appeared pretty pleased with reliability of the engine, stating, “We were worried about [the ambient temperatures and the humidity in places like Orlando and Texas] because it was something we were never able to test back home in New Zealand. It should have been really harsh on the motor but when we pulled it apart at the end of the season it was still like new.” Due to some heat limiter trouble last year, Mike related that “[This year], although we have the same size radiator, intercooler and oil coolers, we’ve really utilized the moving air and ducted and forced air through everything. It has been a massive improvement. So the new 4-rotor setup for this year is almost exactly the same. But we know that we can get away with putting in a little more boost throughout the season, which we actually did in Atlanta.”

As to why they decided not to use the ND’s platform this year, he said, “Mazda had only just released the ND platform and it really made no sense to build a whole new car from scratch. [If we had] this year would have been a whole new development year as the suspension components, the arms, everything is different. So that’s why we just selected to graft the ND MX-5 front and rear onto it. It wasn’t an easy task because even the door position is a lot different. The front guard is actually a lot longer on the ND platform. So yeah it was a lot of work, but it’s all part of the build.” Mike appeared take particular pride in this aspect, saying, “That’s one thing that I really enjoy doing myself. Aside from actually competing and drifting the car, working on the entire build, designing it, deciding the livery and the body kit, just perfecting the overall appearance.”

With this new GEN 2, Mike got off to a good start in the first two rounds of the season of the Formula Drift World Championship in North America and as stated above is sitting as point leader in the world rankings.

The next Formula Drift World Championship round to be held in Japan will be at Okayama Circuit over August 20th (Sat) to 21st (Sun). Don’t miss out on this opportunity to see Mike and his 4-rotor monster.