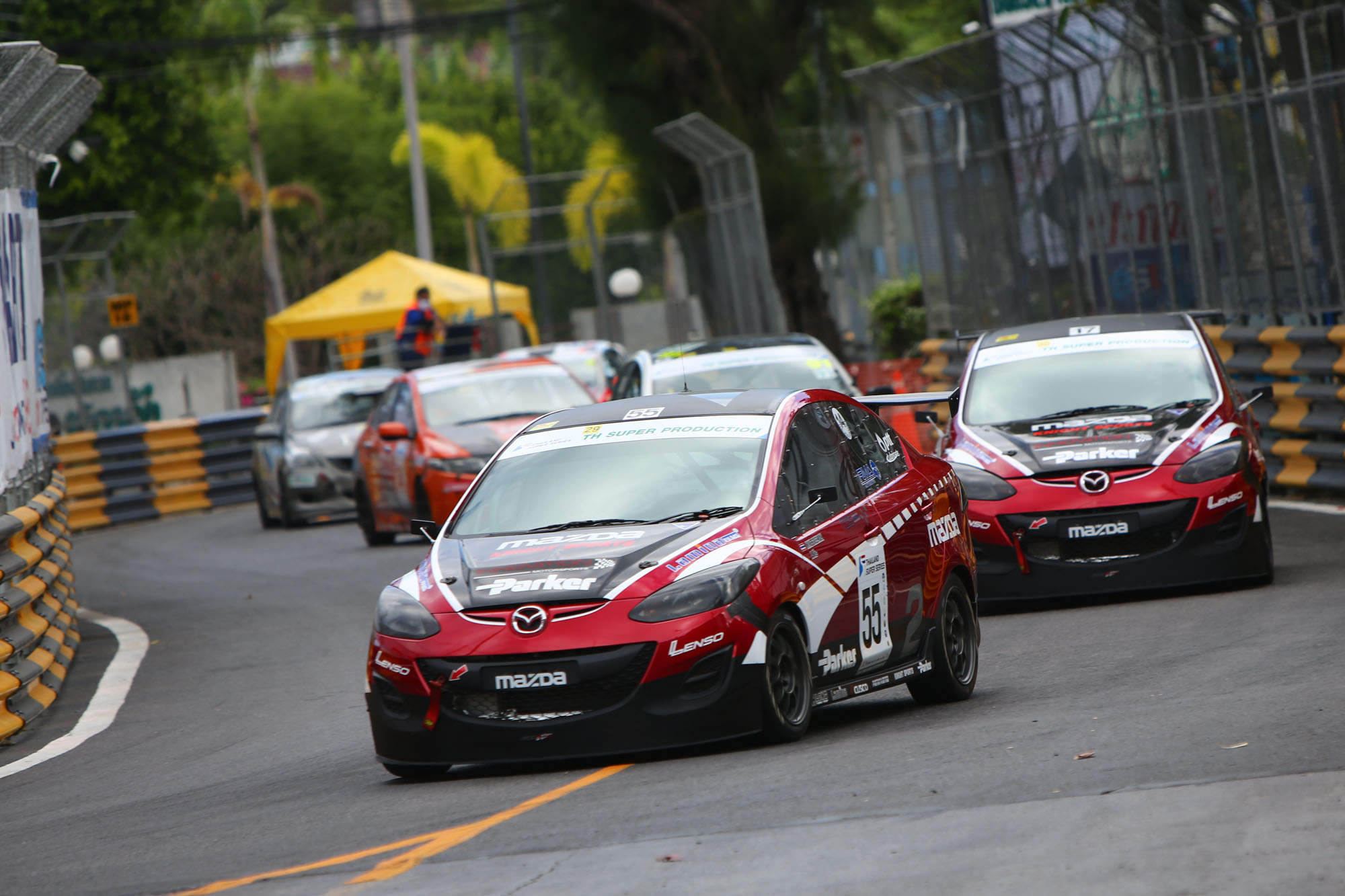 Three races involving Mazda were held at the Bangsaen Speed Festival on December 13th (Sat) and the Innovation Mazda Team had their hands full the entire day.

The final race for round 7 of the Super Production Series started from 9:00am and Pete Thongchua, driving his 5-door Mazda 2 hatchback, began from a 9th placed qualification to finish 6th. Beginning from 8th on the grid, Michael Freeman passed the checkered flag in 7th behind the wheel of his Mazda 2 sedan. Bangsaen’s street course is very narrow and has very few overtaking locations, which makes climbing up even one position no mean feat. Despite this, the two Mazda 2s managed to avoid getting involved in the numerous accidents that occurred at the start of the race and succeeded in raising their positions.

The morning’s cloudy weather cleared in the afternoon and from then on out there were blue skies. The temperature rose to almost 30°C. One of the highlights of the day was the participation of two RX-8s. However, due to a driving misunderstanding, the Knight Sports RX-8 driven by Michael Freeman pitted and then retired. The RX-8 of Pete Thongchua just barely made it across the finish line but, having not driven in qualification, his complete finish wasn’t officially recognized. Freeman stated, “After adjusting the front and rear balance of the brakes on the straight, I felt a strange sensation in the pedals. I was relieved when a later inspection showed there was nothing wrong with the car. So I’m going to go all out tomorrow.”

The third race was the Super Pickup. After taking victory in Round 7 on the previous day, Thongchua started this race from 4th on the grid. Although there was a dispatch of the safety car due to an accident that occurred in the opening lap, when the race resumed, Thongchua gradually closed in on the leading vehicles and, with each passing lap, climbed up the order. At mid-race he again managed a turnaround to jump into 1st place, but following this his turbine was damaged and the car began to leak oil. Unfortunately, he would not be able to complete the race by passing the finish line. It seems that maybe he pushed a little too hard. However, when he was officially announced as the 2014 Thailand Super Pickup Series champion in the award ceremony held after the race, huge cheers from the crowd greeted him. Within the season’s eight races, Thongchua has dropped out of two, including today’s, but took victory in the remaining six, clearly demonstrating his overwhelming pace.