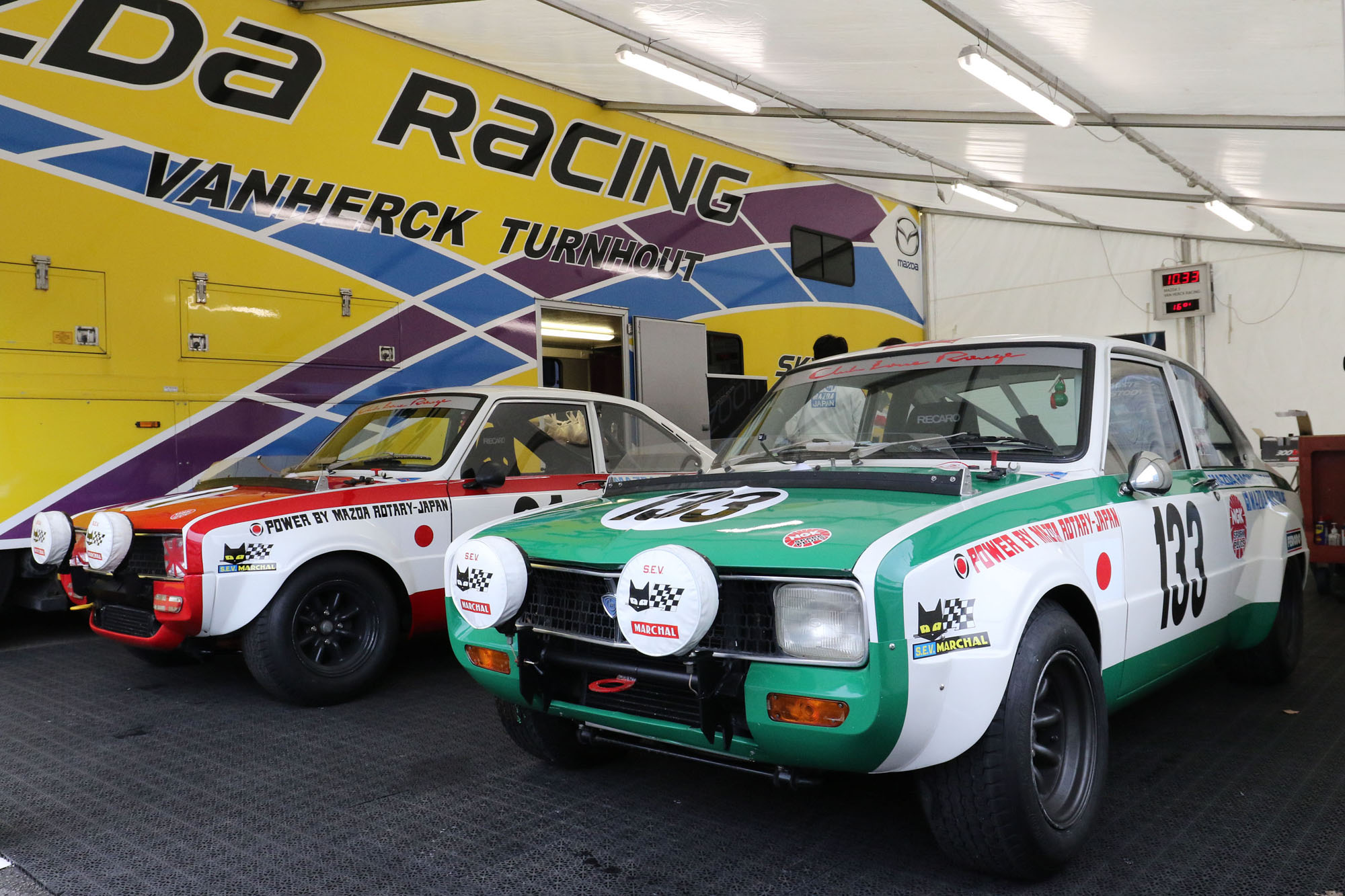 Qualifying for the “Masters 70’s Celebration” at Circuit de Spa-Francorchamps was held on September 19th and the two Mazda R100 Racers from Japan passed through the 30-minute session without a hitch.

The R100s, which arrived at the Port of Antwerp at the beginning of September, were transported to the circuit paddock on the 19th through the assistance of Mazda Belgium. Here they would be utilizing the paddock facilities of local team, “Mazda Racing Team Van Herck,” and make preparations for running on the track. The Japanese team, led by the owner of the R100s, Jin Kato, was taken aback by the quality of the facilities. Kato went on to say, “I’m very grateful for all the assistance from Mazda Belgium. We wouldn’t have been able to prepare all of this by ourselves. On top of that, large numbers of Mazda fans, along with people who saw and were impressed by the R100 in that 1970s race, have been popping by to pay us a visit. The amount of interest has been amazing.” Having traveled by ship for approximately one month since leaving the port of Hiroshima, when both the engines fired up without fail, everyone involved breathed a sigh of relief.

However, as is always the case in racing, not everything proceeded smoothly. The two R100s were scheduled to take part in the free practice sessions held on the 18th, however, due to volume restrictions, were not able to. The restrictions called for a maximum of 103 decibels, but even equipped with a makeshift silencer, the R100s were still producing 108 decibels. #133 driver, Kato, and #31 driver, Ikuo Maedo, returned back to the paddock in disappointment. Kato stated, “Obviously we wanted to complete as many laps as possible before qualifying so it’s pretty disappointing that we can’t. We will be driving these cars to their max in qualifying, which has no volume restrictions.”

Unlike the unpredictable weather seen on the 18th, the 19th saw pleasant conditions with blue skies peering through the clouds. The road surface was dry throughout the day. The two R100s completed the 30-minute qualifying session, which began from 3:05pm, and were running in fine form. Maeda took the start in the #31, with local, Xavier Daffe taking the wheel for the second half. Driving for the first time, Maeda went on to ask Daffe about the best ways to improve on his times. As for the #133, the engine didn’t seem to be pulling out its inherent performance. Following qualifying, Kato related, “In order to get an Historic Technical Passport (Certificate of conformity issued by FIA/JAF) we had to alter the suspension and re-position the engine. Having only just done that, we’re yet to work out some of the kinks. It can take about 3 years to perfect a car for historic car races. Despite this, to be able to run here at Spa with my beloved Familia Rotary Coupe (R100) was a fantastic feeling. In tomorrow’s race I want to drive without once going off course, and then hand the car over to my co-driver, Sugiyama without a scratch on her.”