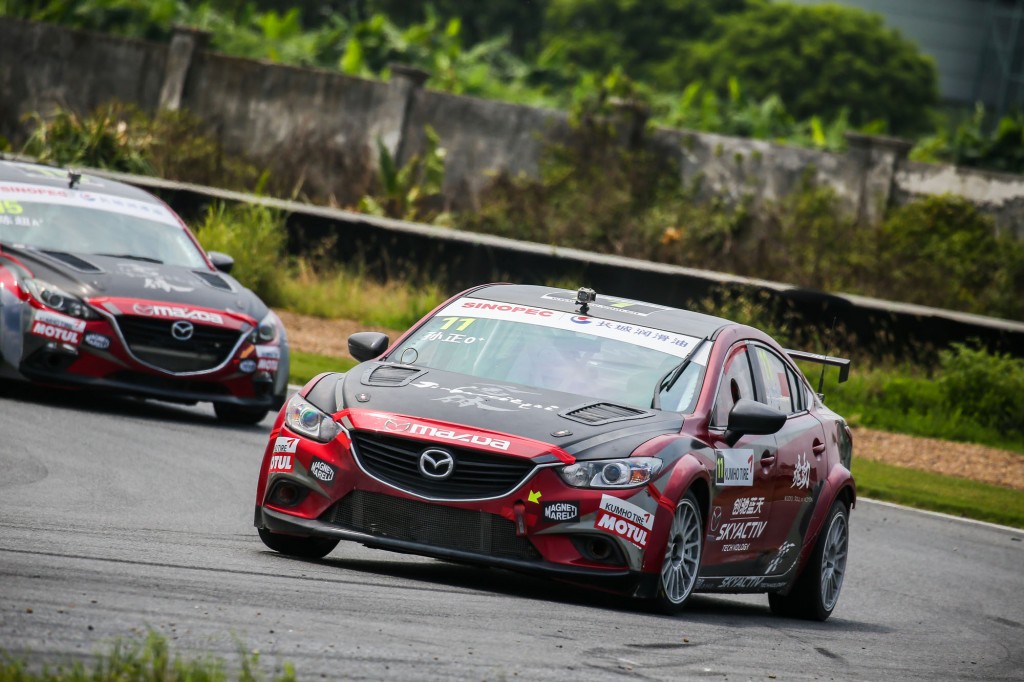 Round 5 of the China Touring Car Championship was held over August 27th to 28th at Guangdong International Circuit where the Mazda China supported Beijing Luisu Racing Team entered four Mazda machines. Starting from Guangzhou, numerous Mazda owners from surrounding cities rushed out to excitedly cheer on the team.

It has been 7 weeks since the last round held in Korea. The team devoted this time to making improvements and adjustments to their machines and managed to achieve a 15kg weight reduction of their Mazda 3 Axelas, which competed in the Production Class (1.6 liter NA). The #22 was driven by Dèng Xiǎo Wén and the #23 by Hè Zé Yù. In the Super Production Class, where a wide range of modifications are permitted, a 2.3-liter NA engine mounted Mazda 6 Atenza (#11 Sūn Zhèng) and Mazda 3 Axela (#15 Chén Chāo) competed. This would be the first time the Mazda 6 Atenza would go out mounted with a new engine that produces 335hp. As this category mostly consists of 1.6-liter turbo vehicles, many factories teams such as Honda and Kia compete. The Beijing Luisu team’s club team enters two private entries that Mazda China, impressed with their zeal, began supporting from 2015.

In the official qualifying held for the 21-car Production Class, the #22 secured 14th while the #23 grabbed 20th place on the grid for Heat 1. Throughout a fierce battle the #22 briefly climbed up to 10th place but in the second half of the race was rear-ended by a pursuing rival, which pushed it into a machine in front. Suffering damage to the front of vehicle they were forced to pull out of the race. The #23 was also unable to avoid getting embroiled in a crash involving several cars and this left it finishing in a retirement. However, the mechanics worked steadfastly to enable both cars to be on the starting grid for Heat 2. From there, as the Mazda cheer squad cheered it on, the #22 carried out a fervent fight and completed the race in 11th. The #23 courageously battled it out through the turbulent race but ultimately the machine let out a cry and was forced to retire due to overheating.

The Beijing Luisu club team’s two machines went up against 7 manufacturer teams in the Super Production race, where the #11 placed 7th in Heat 1 and 6th in Heat 2, The stunning #15 Mazda 3 Axella, with its unique over fender, finished Heat 1 in 8th and Heat 2 in 7th. Having competed fiercely with the factory teams, they earned themselves the club championship trophy.

296 Mazda owners turned out to this Guangzhou round to cheer on the Beijing Luisu team and they all looked over the moon when they visited the pits and shook hands with the drivers.