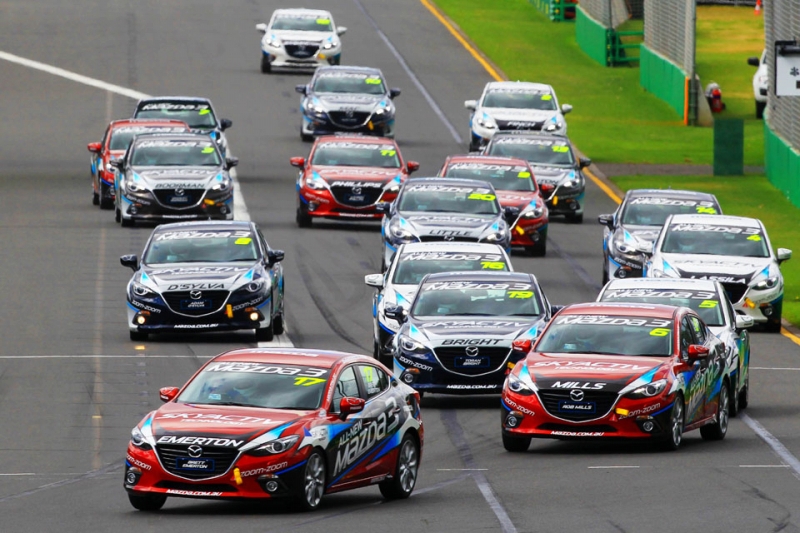 Former Socceroo Brett Emerton has won the 2014 Mazda3 Celebrity Challenge ahead of Grease star Rob Mills and The Bachelor, Tim Robards, in an action packed final race at the 2014 Formula One® Rolex Australian Grand Prix.

Starting from pole, Tour de France legend Robbie McEwen stalled his All-New Mazda3 as the lights went green and had a nervous wait as the remaining cars passed by without incident. In recovery mode, the first race winner tried to claw his way back, but an off-track later in the race saw him finish near the rear of the field. In what was an entertaining race, international adventurer, Charley Boorman, was aiming for a podium result, but an off track excursion saw him zig-zagging his All-New Mazda3 as he desperately tried to get it back into a straight line before spinning and collecting the concrete barrier. Rob Mills may have finished second, but he didn’t do it easily, going wide off the road on a couple of occasions, while Robards battled Olympic hero Torah Bright in an epic tussle for third place. Bright was looking like taking the final place on the podium, but Robards gave her new generation Mazda3 a tap, sending her into the gravel and ending her dreams of a top three finish.

By the waving of the checkered flag, Getaway presenter Catriona Rowntree had climbed to fourth – her highest finish of the weekend – edging out celebrity chef Adam D’Sylva in fifth.