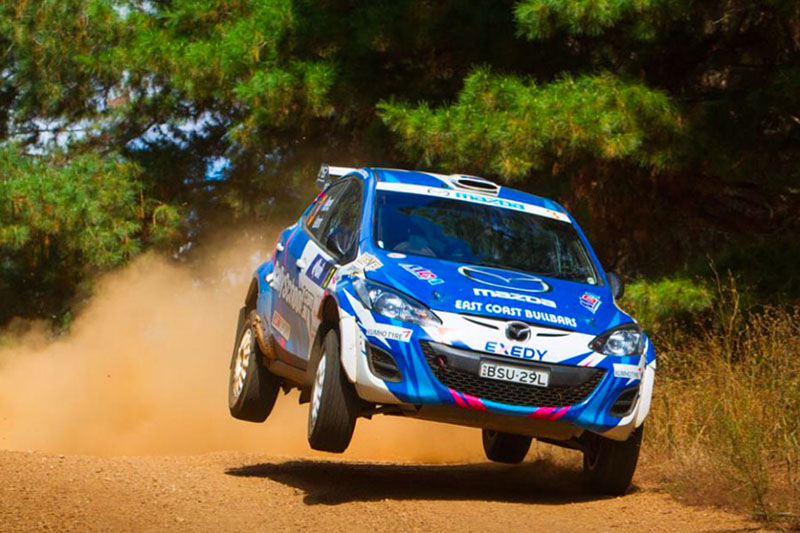 Mazda2 drivers, Brendan Reeves and Rhianon Gelsomino, have increased their lead in the 2014 ECB Australian Rally Championship (ARC) after claiming victory at the Quit Forest Rally on April 6.

After finishing second to the Renault Clio of Scott Pedder/Dale Moscatt in Heat 1, Reeves was determined to get back on the top of the podium on the final day. Heat 2 didn’t start as well as planned, though, and put the RallySchool.com.au Mazda team on the back foot from the word go. The first stage of Heat 2 was a four lap Super Special Stage held in Busselton and as Reeves drove to the start line, the power leads to the Mazda’s alternator broke and he was forced to drive the stage with no power steering or electrics. This meant he’d take a 9.6 second deficit to Pedder into the forestry stages.

Bad luck continued on the morning’s first stage when a broken rear window meant large amounts of dust in the car and Reeves backed off a little to ensure he finished the stage safely. With the window patched up, the remaining two morning stages were a close battle with Pedder, with the Renault driver leading at the mid-day service by 32.4 seconds.

Reeves swapped to harder compound tyres for the afternoon stages and immediately found more grip. When Pedder’s clutch gave way in the first of the afternoon stages, Reeves took the lead and gradually increased the margin to his nearest rival, Tony Sullens/Julia Barkley (Citroen DS3), for the remainder of the day. His winning margin was just over two minutes 12 seconds.

“It’s been a really tough event,” Reeves said. “Scott (Pedder) has driven well all weekend and it’s a shame for him that he had clutch problems this afternoon, but that’s rallying.”