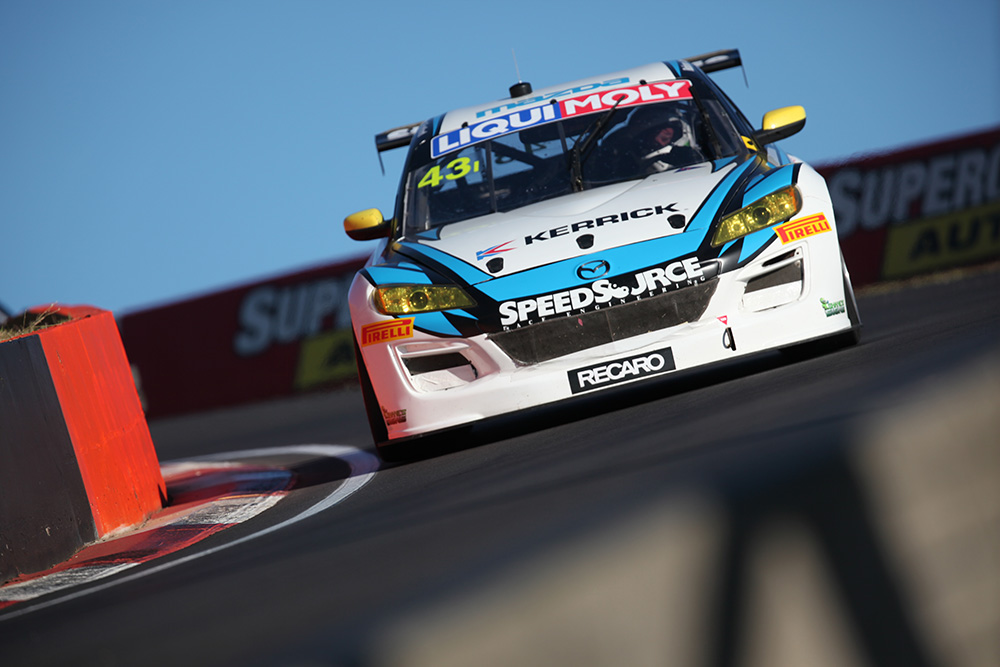 In 2014 Henley Racing, which is based in Victoria, Australia, acquired a couple of Mazda RX-8 GTs that had previously driven in the US’s Grand-Am series. The team entered two of these machines in the Bathurst 12 Hour, held on February 8th at the Bathurst Mount Panorama circuit, and despite a number of hardships managed to bring them across the finish line.

In qualifying, the #41 RX-8 suffered an oil leak, while the #43 RX-8 spent a large amount of time in the garage due to some technical troubles. However the mechanics carried out strenuous repairs to get them through qualification and advance them to the starting grid of the race. The exhaust sound of the RX-8 GT’s 20B 3-rotor engine resounded around the track, particularly at Mountain Straight and Conrod Straight, which exhilarated the large number of rotary fans who’d turned out to watch.

In the final race the #41 spun out right before the #43 was preparing to make its second pit stop. Miraculously managing to return to the course intact, the clutch trouble with which it had been struggling appeared to be resolved at this point. Approximately an hour later the car began to experience steering abnormalities and after returning to the pits the mechanics hurriedly got to work on making repairs. On the other hand, the #43 was steadily ticking off laps in fine form. Not long after, however, it would survive a spin but make contact with another car, which caused damage to its tires. On top of this, they lost a lot of time during a driver change when they experienced issues such as starter motor trouble. In spite of this, the car managed to run the full 12 hours and 234 laps to pass the checkered flag in overall 29th and class 3rd. Chief mechanic, John Perkins, said, “Although we experienced our fair share of troubles, we all worked together and managed to finish the race. Being a private entry, just to be able to cross the finish line at the Bathurst 12 Hours is fantastic.” As for the #41, it returned to the race after spending 1 hour and 45 minutes on repairing the steering, only to be forced back to the pits again due to clutch trouble. With 40 minutes remaining in the race it was back out on the track. It finished the race after completing 149 laps.

In addition, MARC Cars Australia entered a Mazda 3 sedan, which had a Ford V8 engine swapped into the FR layout. At 5 hours into the race this beast was running overall 20th. Watching this machine chase down the mainstay of FIA GT3 machines with its unique V8 sound was quite a sight. However, at lap 204 it made contact with an Audi R8 GT3 on the inside of turn 10 within Mcphillamy Park. The Audi ended up pushing into the Mazda 3 V8’s left rear causing it to lose control, run across the gravel and slam its rear into the tire barrier. Due to extensive damage it was forced to retire, but its driver, Ivo Breukers, escaped without injury. Although this was a disappointing result, the sound and splendor of the machine was phenomenal. I’m sure we haven’t seen the last of this car in Australian touring car races.