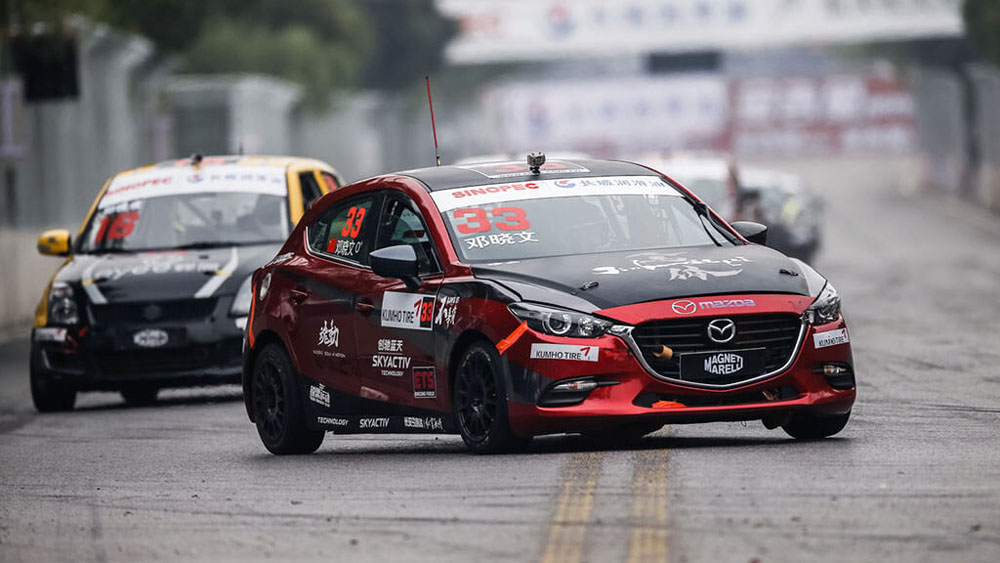 Round 7 of the China Touring Char Championship (CTCC) was held over November 18th to 19th at a street circuit established in Wuhan City, Hubei Province where the Mazda 3 Axela of Dèng Xiǎo Wén finished in 4th in the Production Class. The Beijing Ruì Sī racing team, that has had a rough season, was elated in the pits following the race.

The Wuhan street circuit was located in the city center and consisted on a course of closed down public roads that looped around the Wuhan Sports Centre Stadium. Until now the Beijing based Ruì Sī team entered two Mazda 3 Axelas (naturally aspirated 1.5 liter) in the Production Class and a Mazda 6 Atenza (2-liter turbo) into the Super Cup Class. However, from just before round 6 their Mazda 6 began having technical trouble, and being unable to return it to form the team made the decision to focus on their two Production Class vehicles.

Utilizing the almost one month interval from the previous round at Ningbo, the team reviewed the electrical systems of the two Mazda 3 Axelas, rebuilt the engines and carried out other improvements. During qualifying the team’s drivers ran fairly conservatively in order to check the new settings and #33 Dèng qualified 17th out of the 24 pack, while #11 Dǒng Liàng secured 18th. Race 1 was held under rainy conditions and starting from 17th on the grid, Dèng’s Mazda 3 Axela hatchback aimed to secure a good starting position for the next race and thus avoided collisions and other accidents throughout the extremely narrow city course and finished the race at 16th. On the other hand, Dǒng’s Mazda 3 Axela sedan had issues with the Marelli ECU assigned by the series administrator, which meant he had to take actions to avoid overheating and keep his eye on the car’s water temperature as he drove the car passed the finish line in 17th.

Race 2 became the highlight of the event and Dèng’s #33 started from 16th on the grid. From there his pin-point, aggressive driving on this dangerous course pulled him up the order right from the start of the race and by lap 9 he had passed 12 rivals. However an accident that occurred after that saw a yellow flag caution that prohibited overtaking prevented him from advancing any further. In the end he passed the checkered flag in 4th. Although he just missed out on a podium finish, he’s impassioned drive made him the hero of the television coverage. As for Dǒng’s #11, he began from 17th on the grid and completed the race unscathed in 18th.

Mazda China held a “Mazda Jinba Ittai College” brand experience event in tandem with this event at a Kart course located in Wuhan city. As many as 146 Mazda car owners gathered to deepen their understanding of the Mazda brand through lectures, public viewings, kart experiences and so on.

Text and Photos by Mazda China