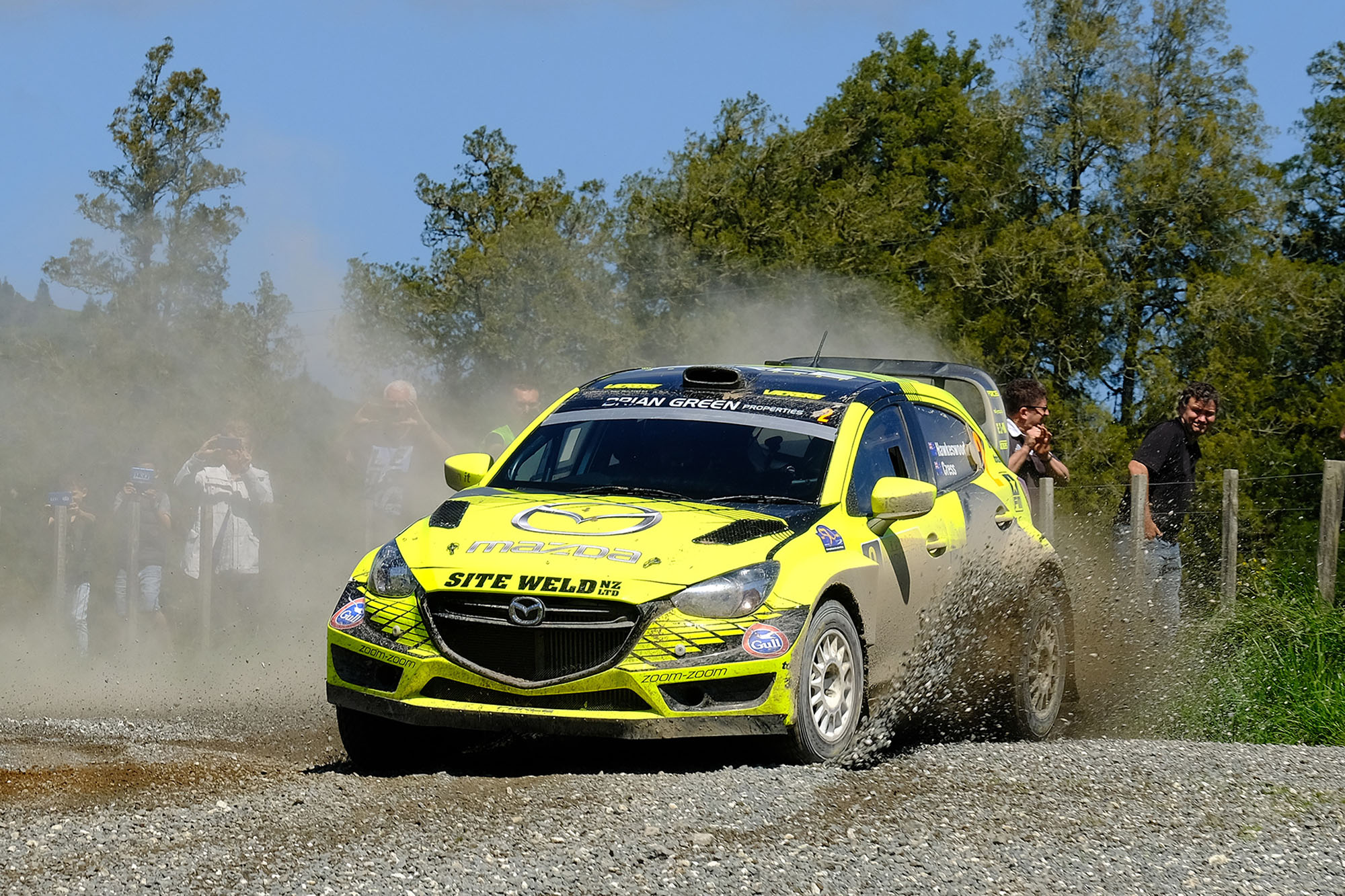 Widely known as one of New Zealand’s most spectacular rally drivers, Hawkeswood was competing in a Mazda 2 modified to the AP4+ rules which include an 1800cc turbo-charged engine, four-wheel drive and a control set of suspension pickup points.

After a season developing the new style car in 2016, Hawkeswood had just one goal for the 2017 season, to claim an elusive national championship. The opening round took teams to Dunedin, near the bottom of the South Island and immediately Hawkeswood set the pace, with a 20 second lead after the opening three stages. Unfortunately a fractured oil cooler resulted in time penalties for roadside repairs and Hawkeswood would come home in second place, 45.9 seconds off victory with 50 seconds of time penalties.

The second round saw the series head to the top of the North Island for the International Rally of Whangarei. The opening day was held in torrential rain and did not go well for Hawkeswood, who was forced to retire with an axle failure. He would come back for day two and take crucial bonus points for winning the second leg.

Round three saw teams head south for Rally Canterbury, based from Christchurch. As top seed for the event, Hawkeswood had the best road positions in what were torrential wet conditions through the forestry roads. The Mazda immediately set the pace with split times suggesting a stage win of more than ten seconds was on the cards, until a costly power steering failure that dropped Hawkeswood to 22nd place, more than six minutes off the lead. A trademark fight back from Hawkeswood meant he would get back to sixth place, having clawed more than a minute back from the leader. He also would take five very important bonus points for victory in the power stage.

After a three-month break, the Force Motorsport team headed for Rally Coromandel with not only Hawkeswood’s AP4+ car, but a brand new 1600cc Mazda 2 AP4, to be driven by Australian Brendan Reeves. Despite a star-studded entry that included WRC star Hayden Paddon, Reeves would lead home Hawkeswood in a 1-2 finish, which would also see Hawkeswood move into the championship lead with just two rounds remaining.

Looking to really extend his lead at the penultimate round, Hawkeswood pushed early and despite a puncture would win the opening stage by a strong 5.7 seconds, but more importantly more than a minute faster than his championship rival. However an overheating issue caused by a weeping head gasket would soon slow the pace in the Mazda, seeing Hawkeswood drop to seventh place. Knowing what was on the line, Hawkeswood again pushed on as hard as possible through the corners while nursing an ailing engine, and a final stage win meant he claimed fourth place, extending his championship lead.

So the championship would come down to the final round, the prestigious Rally New Zealand. Hawkeswood took a conservative approach, setting only the 10th fastest time on the opening stage. However stage two, the Whaanga Coast, has a fearsome reputation from it’s days in the World Rally Championship and has caught out some of the worlds best. Not Hawkeswood however, who climbed the leaderboard and by the end of the opening day, sat in second place, enough to put one hand on the championship trophy.

Knowing that finishing the second day would all but guarantee him the coveted title of national champion, Hawkeswood backed off on the second day, with a fourth fastest time on the final stage the best performance of the day. But it was a performance with one goal in mind and coming home in third place was enough for Andrew Hawkeswood and Jeff Cress to be crowned New Zealand Rally Champions for 2017 in their Mazda 2 AP4+ car.