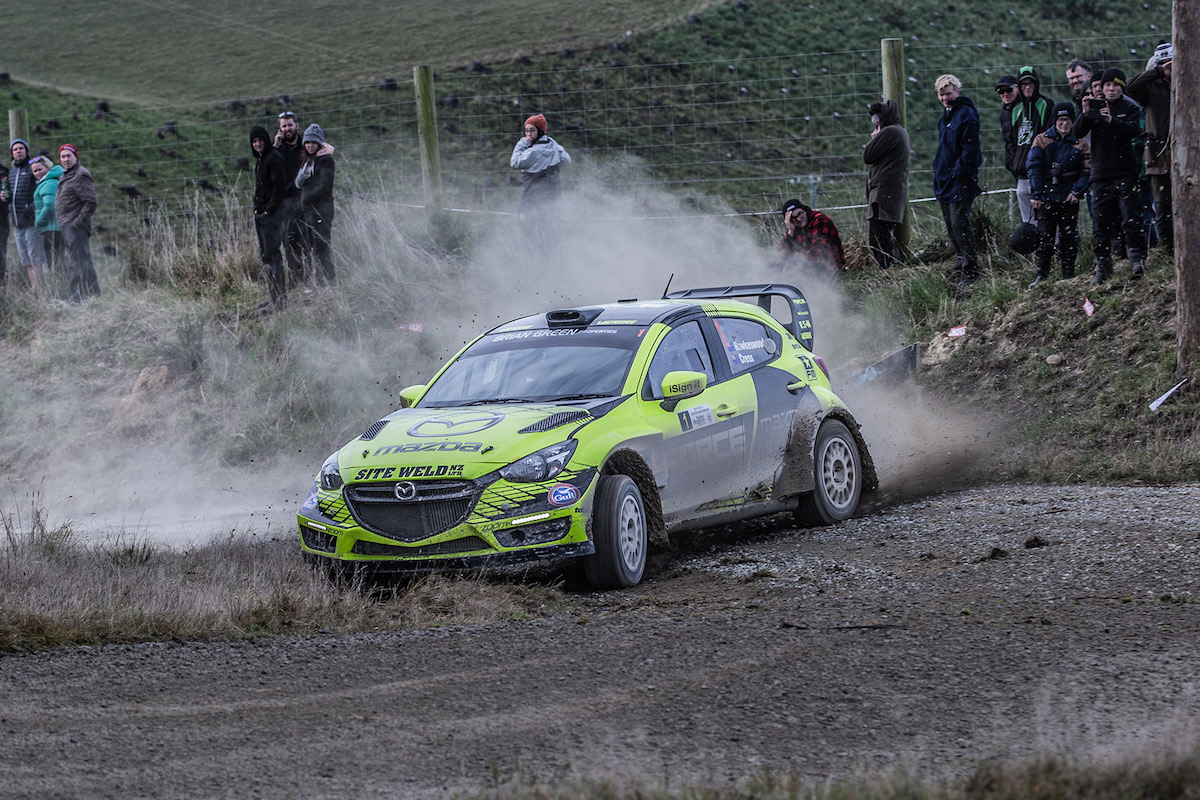 Hawkeswood was part of a three car line-up for Force Motorsport, driving his championship winning Mazda 2 AP4+, while Australian Brendan Reeves returned in the Mazda 2 AP4 that he took to victory at last year’s Coromandel round of the championship. Also in the team was Jack Hawkeswood driving a two-wheel drive non-turbo version of the AP4 Mazda 2.

With the temperature nudging minus five degrees, icy conditions greeted teams. Reeves would survive the opening stage seventh fastest, while Hawkeswood suffered from a fogging windscreen and dropped 40 seconds.

The fightback began immediately from both cars and by the time teams headed to the first service Reeves led the team charge in fourth, with Hawkeswood not far behind in sixth.

Stage four saw Reeves drop time with a sensor problem causing the car to go into limp mode, dropping him to sixth while Hawkeswood moved up to fourth. However Reeves would not give up and a storming run in stage seven saw him power to second place, less than five seconds ahead of Hawkeswood in fourth.  That gap would shrink and heading to the final stage, Reeves and Hawkeswood were separated by just nine tenths of a second, with only a run around Timaru’s Levels Raceway.

Showing just how cruel the sport can be, Reeves’ sensor problem returned and he was wiped off the podium and down to eighth place, while clean run left Hawkeswood with an impressive second place on his return to the championship.

Meanwhile son Jack suffered an axle failure in the opening stage. The team were able to repair the car and the 17-year old rejoined for the final five stages of the rally, setting several top three stage times in his class.

“I would’ve been quite happy to finish third behind Brendo, so that was a bit of a bummer, but other than that it was a pretty good day. We perhaps could’ve been a little quicker, but plenty of people have benefited from my misfortune over the years, so I’ll certainly take it,” said Hawkeswood. “It was also great to see Jack set some strong times and drive with his head in the afternoon, it’s just a shame he had a problem early.”

“What a tough rally,” Reeves later said. “It was a very difficult end to the rally but we have to look at the positives. When things were going well our times were great so that gives us confidence.”

The team now turn their attention to the Goldrush Rally Coromandel on August 18.