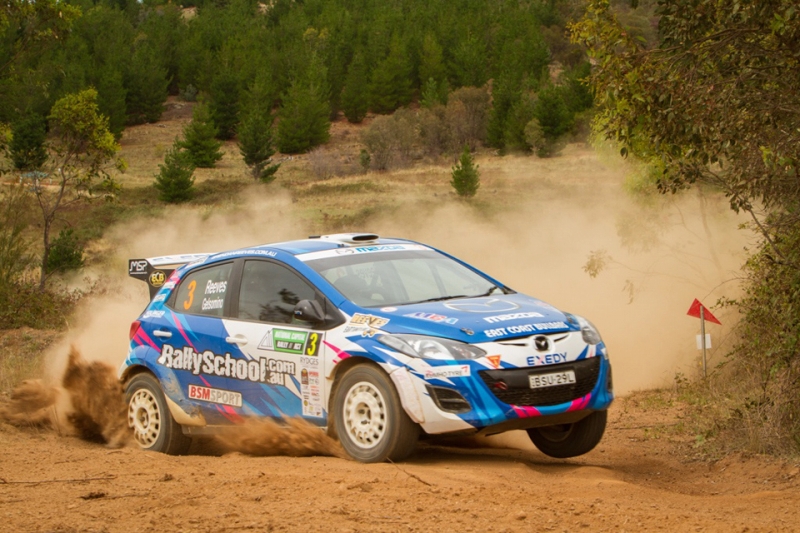 Brendan Reeves and Rhianon Gelsomino had a perfect start to their Australian Rally Championship (ARC) campaign after backing up the last Saturday’s Heat 1 win with another solid victory in Heat 2 on Sunday. Behind the wheel of their RallySchool.com.au Mazda2, they fought a tough all day battle with Scott Pedder and Dale Moscatt (Renault Clio) at the National Capital Rally. In the end, they clinched victory by beating their rivals by 6.6 seconds on the final stage of the day.

Brendan started the day’s first stage with a 3.3 second win over Pedder, a trend he hoped to continue. As reigning ARC champion, Eli Evans, couldn’t re-join today’s rally due to breaking the driveshaft on his borrowed Volkswagen Polo yesterday, the scene was set for an all-out battle for Heat 2 honors between Pedder and Reeves. Although Pedder claimed a win on the second stage of the day, by the lunch break, Brendan had won four of three stages and held a slender two second lead.

The final three stages of the day brought a serious battle. Brendan won the first by one and a half seconds, but Pedder bounced back on the penultimate stage with a 4.7 second victory which gave him a 1.2 second margin with just one stage to go. On the morning run of the day’s final stage, “Rydges Lakeside”, a 14.14 kilometer (8.79 mile) test, Brendan had beaten Pedder by 1.2 seconds – though this left him without any margin to speak of. He headed into the final stage of the day with one goal in mind – to claim back his lead. Something he did with style by winning the stage by 6.6 seconds and claiming the Heat win by 5.4 seconds.

“What an awesome feeling it is to be on the top of the podium,” a delighted Brendan said.“We had a fantastic run again today. The battle with Scott (Pedder) was hot and I’m so happy that we were able to nail it on the final stage. Once again the Mazda2 ran perfectly and I thank our hard working team for that. Road conditions today were perfect. Yesterday’s rain meant that dust wasn’t an issue and apart from a couple of small ruts, the roads held up really well.”