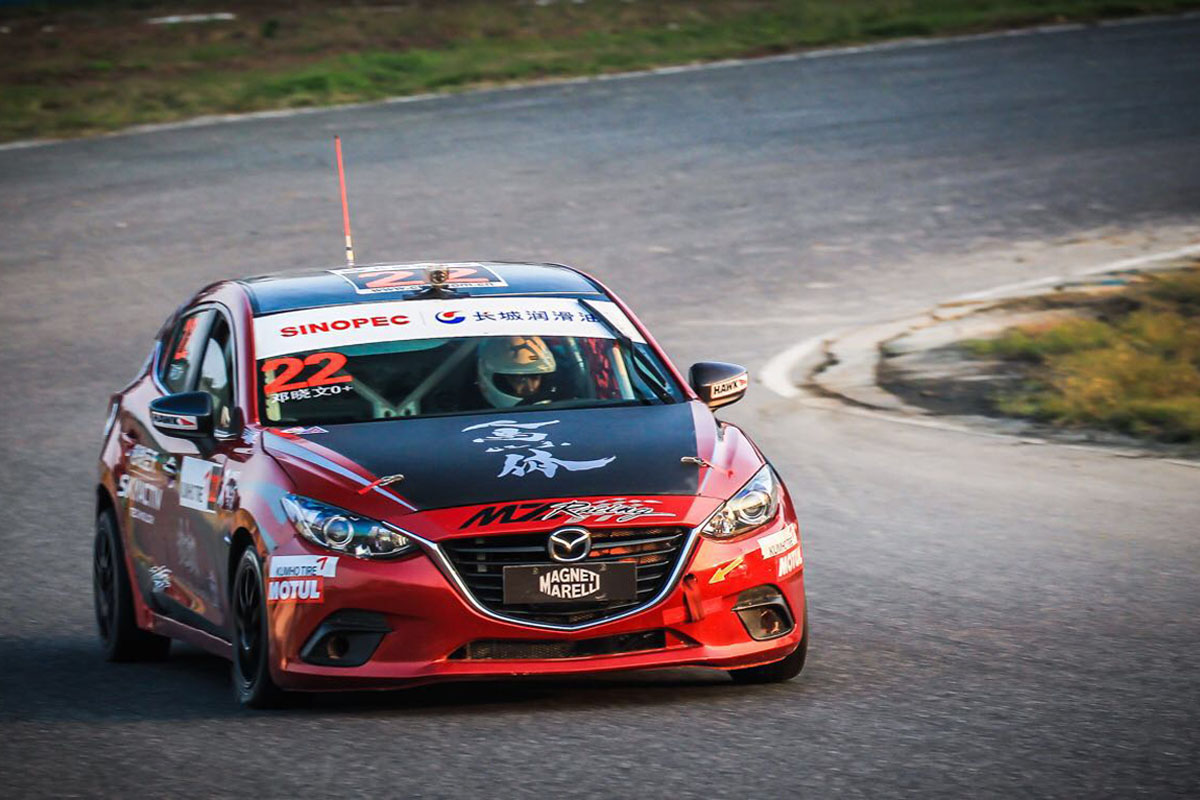 This final round of the China Touring Car Championship (CTCC) was held over November 5th (Sat) to 6th (Sun) at the Shanghai Tianma Circuit where the Mazda 3 Axela driven by Dèng Xiǎo Wén took 4th place in the Mass Production class, while the Mazda 6 Atenza of Sūn Zhèng grabbed 5th. With this the CTCC closed off the season with a large number of Mazda fans turning out to cheer on the team.

Approximately 1 week after the Mazda 3 Axela achieved its first victory in the Guiyang round, the CTCC travelled about 2,200km to the Shanghai Tianma Circuit where race preparations were hurriedly carried out. The Mazda China supported Beijing Ruisu Racing Team did not have time to implement an overhaul on the bodies of their machines but they performed studious engine checks before they headed into the race. The Shanghai Tianma Circuit is a rather narrow course with consecutive tight corners so the mass production class was divided into two groups for official qualifying. Having achieved Mazda’s first CTCC victory in the last round Dèng Xiǎo Wén recorded a 7th fastest time within the 21-car Mass Production class, while 16-year-old Hè Zé Yù, driving the Mazda 3 Axela sedan secured 17th on the grid. On the other hand, the Mazda 6 Atenza being driven in the Super Cup class by Sūn Zhèng qualified 7th out of the 9-car pack, while Chén Chāo’s Mazda 3 Axela was unable to run in qualifying due to driveline trouble and was forced to start the race from the tail end.

Race 1 was carried out under the excited eyes of the Mazda cheer squad and Dèng’s aggressive run in the Mass Production class enlivened the crowd. Starting from 7th place on the grid Dèng’s Mazda 3 Axela immediately shot passed three rivals to jump up into 4th place. From then on he continued to vigorously pursue the cars in the lead but unfortunately an accident occurred mid-race that resulted in a yellow caution and dispatch of the safety car (SC) and with the race continuing on in this fashion until the checkered flag he ultimately finished in 4th. Hè completed the race in 13th place. Dèng continued to attract the attention of onlookers with his aggressive driving in race 2. He started from 5th place on the grid and rose up temporarily to 3rd but was unfortunately hit by another car and this saw him fall back to 9th. Not to take this setback lying down, he engaged in a furious fight back up the order to finish in 6th. His full spirited driving was relayed through the TV cameras, which were all focused on him, and viewers were surely glued to their sets as they watched. Hè started from 9th place and temporarily managed to climb up to 6th but unfortunately became embroiled in an accident with another vehicle that resulted in him finishing in 11th place.

The 2.5-liter engine mounted Mazdas that competed in the Super Cup class went head-to-head with formidable manufacturer entry 1.6-liter turbo machines. Starting from 7th on the grid, Sūn drove his Mazda 6 Atenza and skillfully used the consecutive corners to his advantage to pass two rivals and finish in 5th, his best result of the season. Chén’s Mazda 3 Axela completed the race in 8th. In the second race however, Sūn’s Mazda 6 was caught up in an accident and forced to retire, while Chén’s Mazda 3 showed a strong performance to once again finish in 8th.

With this the Beijing Ruisu Team brought this year’s CTCC challenge to an end. The team worked diligently throughout the year, achieved a number of good results, including one victory to demonstrate that they have rapidly matured as a force to be reckoned with. The drivers have also developed their skills alongside the development of their machines and have wowed fans with their aggressive driving. Dèng Xiǎo Wén stated that his dream was to, “compete alongside Mazda drivers all around the world.” We are proud to have them racing with the MZRacing decals and badges. Thank you for all those who showed interest in the series throughout the year.