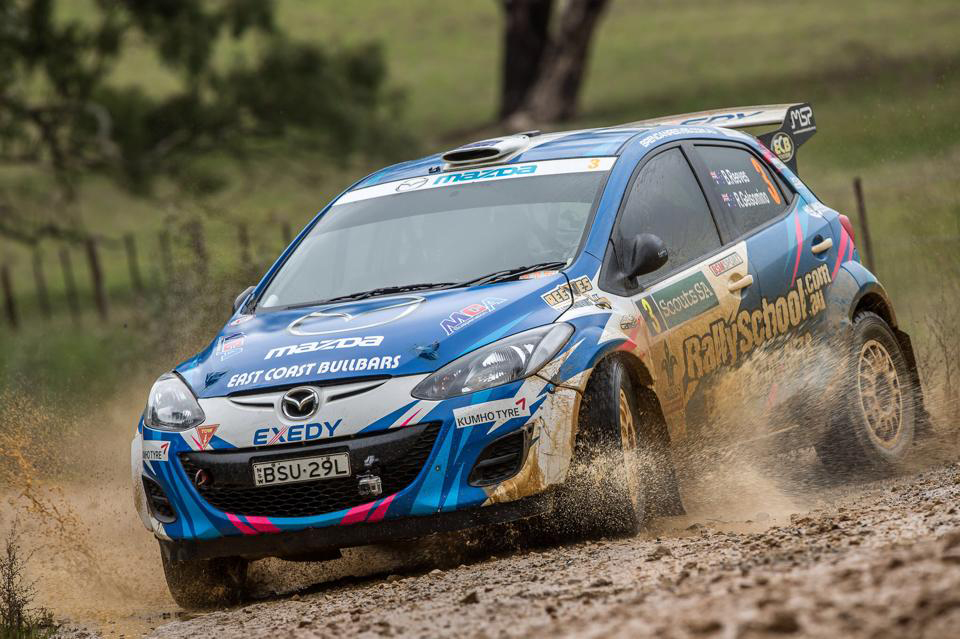 Brendan Reeves and Rhianon Gelsomino have finished 5th after losing a wheel in the final Heat of Scouts Rally SA. The pair went into round 4 of the ECB Australian Rally Championship (ARC) with a sixteen point lead over main rivals Scott Pedder and Dale Moscatt (Renault Clio) but a frustrating weekend means Pedder now has a slight lead in the championship race.

The three stages of Heat 1 were held in treacherous conditions with heavy rain falling around Gawler. Despite failed windscreen wipers on their rallyschool.com.au Mazda2, Reeves and Gelsomino finished the heat just 12.5 seconds behind Pedder. The twelve stages of Saturday’s Heat 2 were reduced to just nine stages (three of which were short 1.05 kilometer runs) because of stage cancellations caused by heavy rain. Reeves struggled with technical issues in the opening stages but after some set-up changes he was soon back on the pace and matching Pedder’s times, beating the rally leader in stage 6. However the three afternoon stages were cancelled which left only the short Super Special Stages. Reeves won two of the three stages, taking his tally of stage wins for the day to three and he was confident of a good run heading into Heat 3. Sunday’s Heat 3 was a tight battle between Reeves and Pedder with less than 5 seconds splitting the pair in the opening three stages.

Reeves’ frustrating weekend quickly became more disappointing when he lost a wheel during stage 4. After repairs were made, Reeves was immediately back on the pace but the cancellation of two stages and the short distance of the other two saw him finish the day in 5th place. Ultimately Reeves and Gelsomino secured 2nd overall for the rally.

The next round of the ECB Australian Rally Championship is Coates Hire Rally Australia to be held around Coffs Harbour from September 11 to 14.