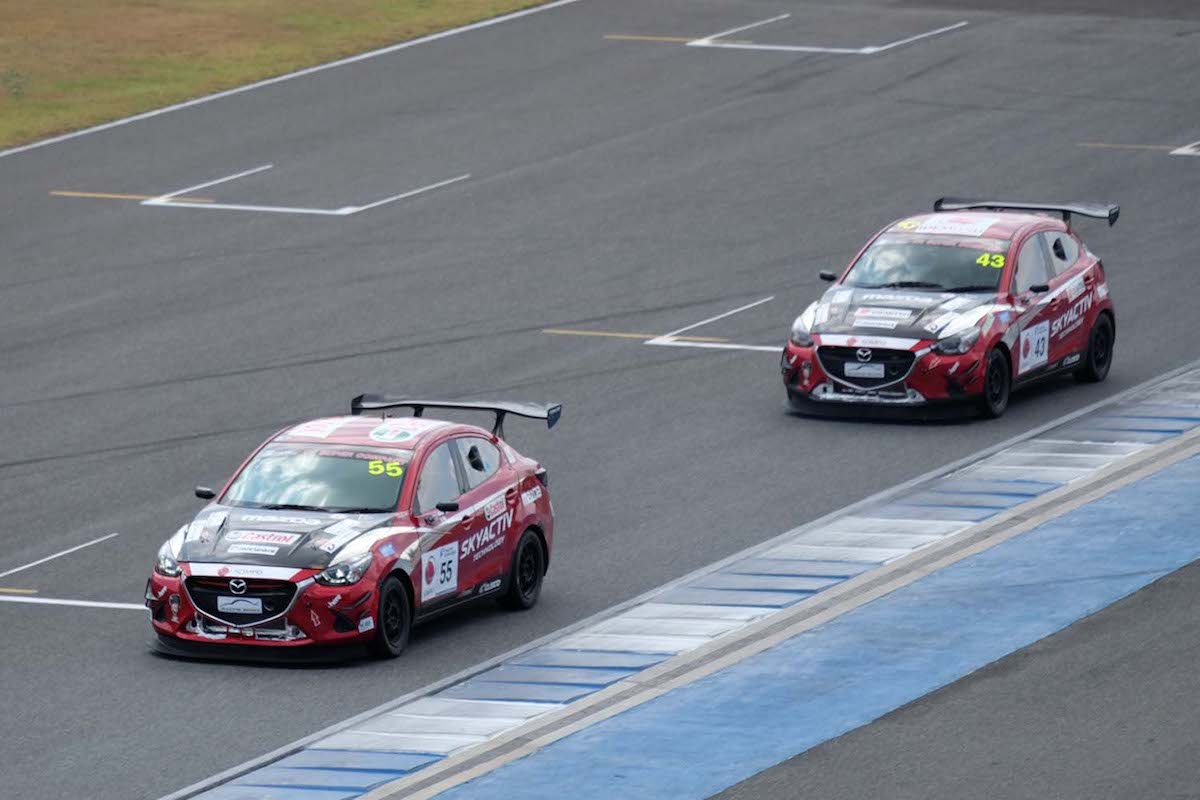 The opening round and round 2 of the Thailand Super Series (TSS) was held over April 29th (Sat) to 30th (Sun) at Chang International Circuit (Buriram) where the official team of Mazda Sales Thailand entered two Mazda 2 SKYACTIV-Ds into the Super Compact Race category. They went on to achieve a 1-2 finish in round 2 held on the 30th.

The Mazda 2s entered into the TSS are based on vehicles manufactured in Thailand. Similarly the SKYACTIV 15D (1.5 liter turbo diesel) engine was produced in a Thailand engine factory. The set a goal of “Winning to show Mazda’s speed” for this season and to achieve this they progressed with development of their machines during the off season. In addition to this the team welcomed a new driver for the season, Mana Pornsiricherd (Thailand) who has extensive motorsports experience in not only circuit racing, but also cross country rallies and motorcycle racing. During the practice session held on Thursday the 27th, Mazda driver Michael Freeman (Australia) recorded the top time and Mana marked down the second fastest. With the until now seemingly unbeatable Ford Festa of Sirahop Natirojanachaicharn coming in 3rd fastest it immediately gave the impression that this year’s Mazdas were a force to be reckoned with.

Official qualifying was held on Friday the 28th where the #43 5-door Mazda 2 of Mana recorded the top time despite going up against teams with greater engine output. Freeman was just behind, marking down the 2nd fastest, while Natirojanachaicharn was 3rd, meaning Mazda would occupy the front grid for the first round. Mana demonstrated the ability to immediately grasp the characteristics of his vehicle despite only driving a few laps pre-race and pull out an impressive time attack to take pole. His cornering was particularly exceptional making him a strong new face for the Mazda team.

Mana took the lead early on in the opening round, while Freeman and Natirojanachaicharn engaged in a fierce battle for second to make it a very exciting race. However, at around the lap 6-7 mark, both Mazdas experienced a higher than expected rise in oil temperature and due to the intervention of their CPU they began to lose pace. Despite relinquishing the lead to Ford’s ace, Natirojanachaicharn, #43 Mana still secured a 2nd and #55 Freeman a 3rd place podium finish. In the second round held on the 30th the Mana began from 4th on the grid and Freeman from 3rd. Immediately after the race started, Natirojanachaicharn, who started from fifth, tried to make a break out at turn 1 but made contact with the machine that began from 2nd. Although he immediately pitted his team were unable to repair the damage and he was forced to retire. From then on Freeman, running in 2nd, would take the race lead and to his rear Mana moved into 2nd and began fending off challenges coming from the two Honda Jazz cars following behind. They continued on like this for the rest of the race and the Mazdas achieved a 1-2 finish. This was a fantastic day for Mazda Thailand. However, the other teams are expected to come out stronger in the next round at Bang Saen and it is expected to be a tough race. The Mazda teams will continue to build up their strategies to ensure they run ever faster and consistent in the races to come.

“We were able to get this result due to the fantastic car and support from everyone in the team. I’m really relieved I could live up to everyone’s expectations. We will be aiming for another good result at Bang Saen so please cheer us on.”

“We still have a lot of room to improve on the car’s undercarriage and other areas. I’m really glad we could get such a good result this time around. Mana also showed us a great performance and I think the decision to team up with him was a great success. We will do our best to achieve a good result for Mazda Thailand and all our sponsors who are giving us so much support.”