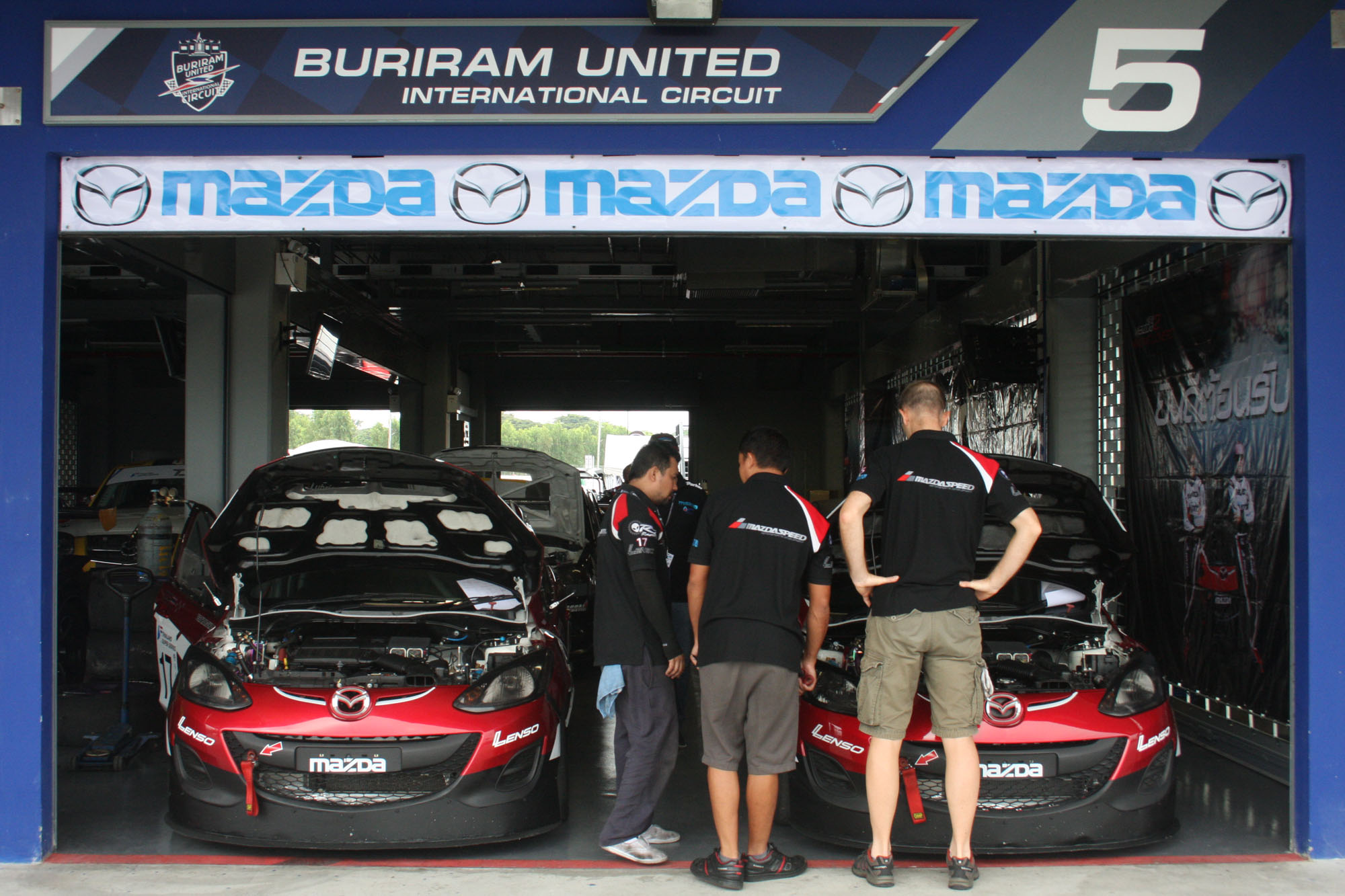 Rounds 5 and 6 of the Thailand Super Production Race were held over November 1st (Sat) to 2nd (Sun) at the Chang International Circuit in Buriram, Thailand, were two Mazda 2s of the official team of Mazda Sales Thailand put in a gallant fight.

These two Mazda 2s arrived at this new international circuit having made small improvements to their power units in order to lift their performance. However, their rivals had also considerably increased the power of their machines and in the qualification session Pete Thongchua (#17) placed 7th and Michael Freeman (#55) 8th. In the first race held on Saturday (round 5) #55 Freeman engaged in a battle for 5th after a clean start but after a bumper-to-bumper skirmish he finally finished in 6th.The #17 fell down the pack due to technical trouble. Later, two of the higher order finishing vehicles were disqualified after re-inspection. With this, the #55 moved up to 4th place. For the second race on Sunday, round 6, #55 Freeman began from 5th place on the grid but damaged his rear bumper in the hectic melee of the first lap. After this, he went on to defend his position in 5th place. Later, there was a large accident involving numerous machines and after his rivals fell down the order, Freeman’s #55 Mazda 2 leapt forward and finished the race in 4th. On the other hand, Thongchua’s #17 Mazda 2 began from the tail end and weaved its way through the vehicles in front to achieve a 6th place finish. On this day, also, a top tier finishing car was found to be in violation of the technical regulations and thus the #55 moved up to 3rd and the #17 to 5th.

This time Mazda Sales Thailand, along with major dealers, dispatched a large number of cheer squads to the circuit who gave loud support to the strong drives of the Mazda 2s. The next round to be held over December 12th-15th at the Bangsaen Street Circuit will be this year’s final round. In addition to the Super Production Race, there will be two RX-8s competing in the main race, the Super Cup, and Thongchua and Freeman will both be taking the wheel of one of these machines. It will be very exciting to see what kind of a show the RX-8 can put up against super car rivals such as Porsche, Lamborghini and Ferrari.