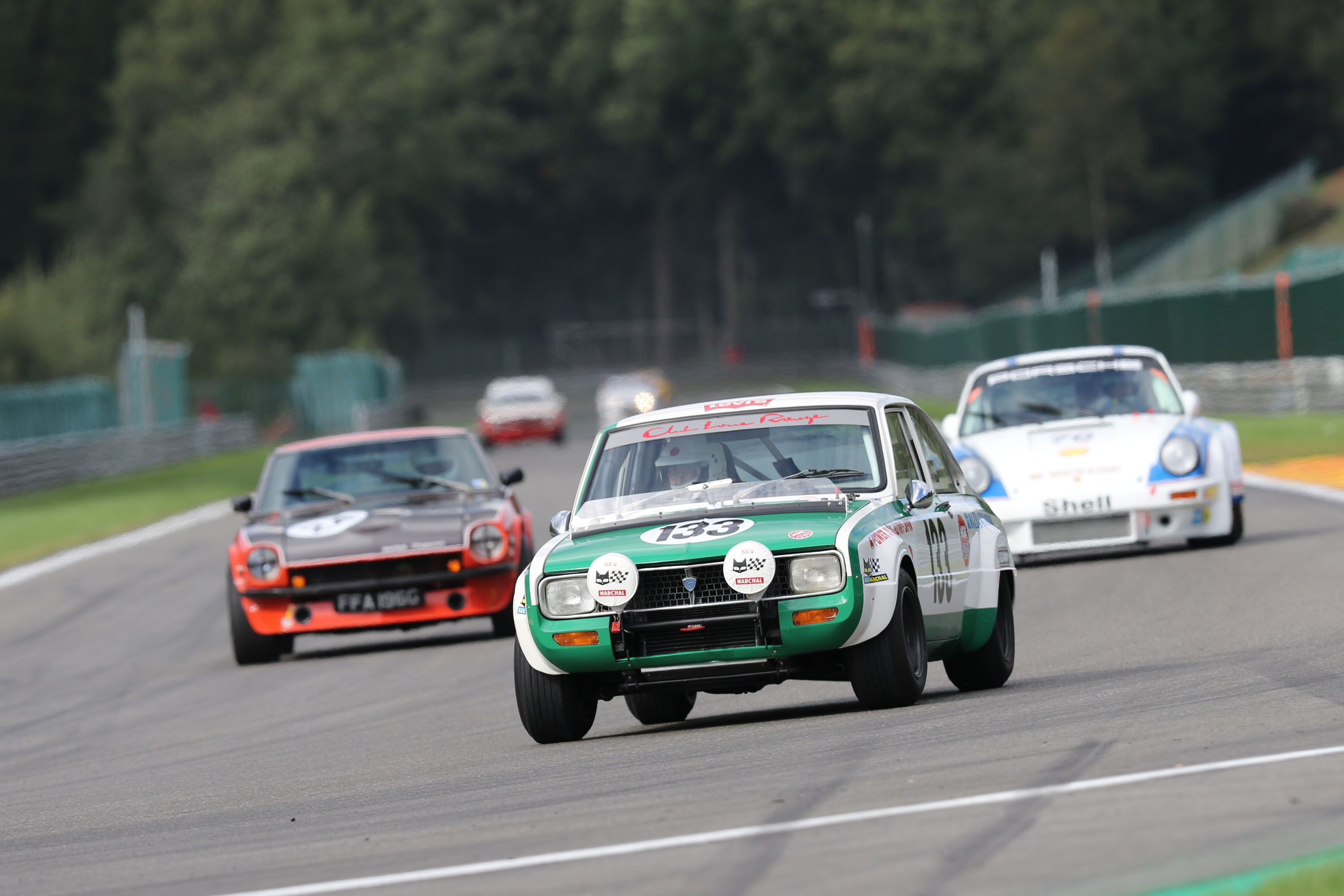 The final race for the “Masters 70s Celebration” was held on September 20th and the Mazda R100 driven by owner Jin Kato passed the finish line without a hitch. With this Kato’s “Spa Dream,” which had spanned many years, finally reached its happy end.

The frame of 70s racecars that competed in the race consisted of 5 classes of a total of 32 machines. Under semi-wet conditions, every car headed into the formation lap at a high pace, confirming the state of the course as they went. After one lap the green flag was waved and the race began. With most of the course still damp the pack of machines could be seen sliding out their tails while shooting through the Eau Rouge (“red water”) sudden downhill-uphill sweeping corner. Starting behind the wheel of the #31, Ikuo was hot on the heels of the Alfa Romeo 2000GTV and lifted his pace right from the get go. Just when it seemed like he was on the verge of making a pass, he spun out on the high-speed climbing corner of Eau Rouge. Hitting the nose of the car into the crash pads, he came to a stop. However, he was immediately able to restart the engine and get the car back out onto the course to continue driving. After carrying out some emergency repairs, the car was handed over to local veteran driver, Xavier Daffe. Having driven at a high pace that exceeded the times he achieved on the dry road surface in qualifying, Maeda went on to say, “After I started sliding I tried to regain control through the accelerator to keep her on the course but unfortunately I ran into the crash pads. That moment felt like it lasted for an eternity. The car felt even better than it had in qualifying and the times I was achieving were good so it’s pretty disappointing. I feel really bad for damaging our machine.”

On the other hand, the #133 driven by Kato steadily ticked of laps at a solid pace. Pitting as planed in the middle stages of the race, he returned back to the course after an approximately 1-minute stop. At this point the road surface was still half wet and Kato found himself aiming for the finish line while battling with the rear of the car sliding out from under him. Under these difficult conditions Kato himself also spun out one time, but luckily managed to return the car to the course without a scratch. Then, after 40 minutes, the checkered flag was waved at the control line flag tower and the race was ended. Kato related, “Early on I was concerned that the car’s body would become unstable on the downhill sections, but in the second half the road conditions gradually began to improve and driving became much easier. With every lap the joy of being able to race at Spa began to fill every fiber of my being and now that the race has ended I’m lost for words. To have so many people assist us, and then receive support from so many local people who remember the R100s performance here all those years ago, I’m just completely overwhelmed.”