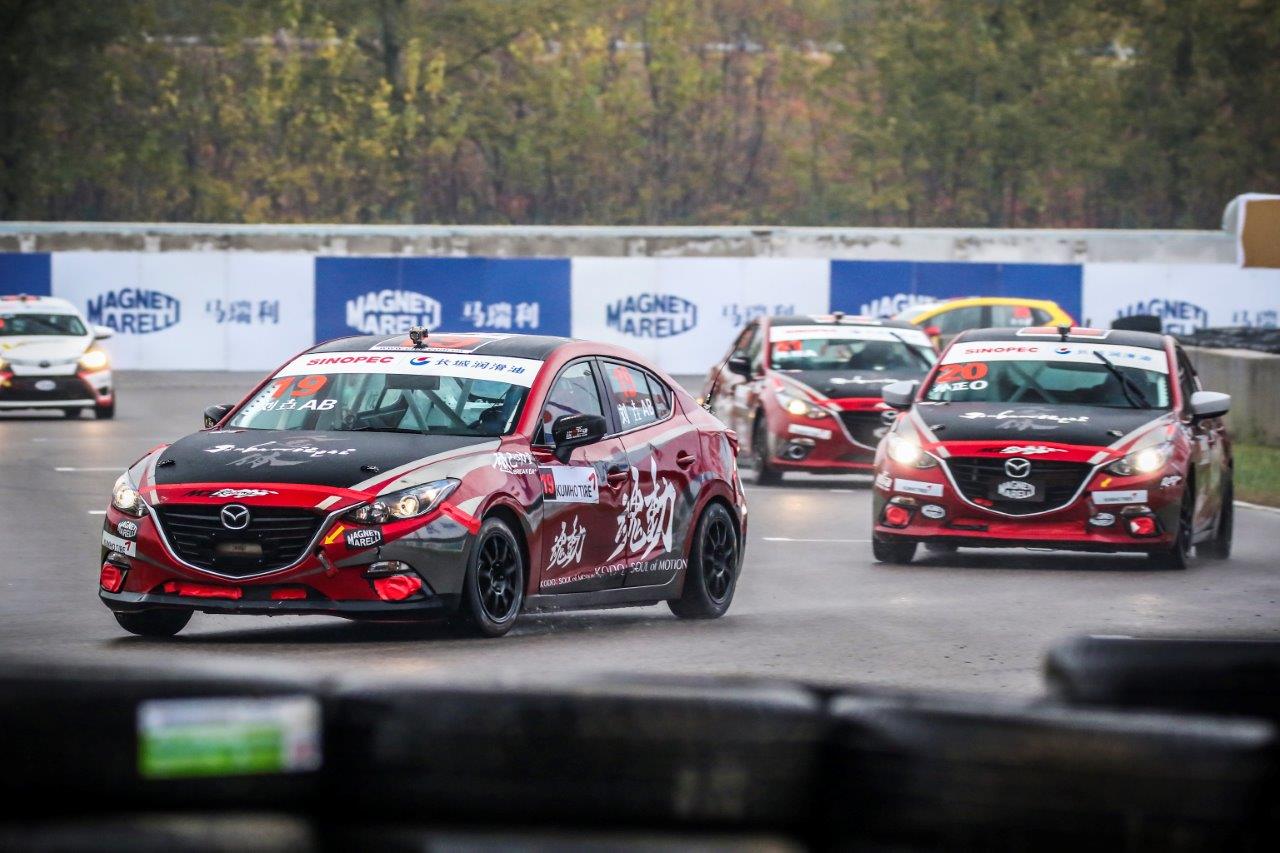 Round 8, the final round of the 2015 China Touring Car Championship, was held over November 7th (Sat) to November 8th (Sun) at the Beijing International Circuit. The weather conditions on the 7th were rainy, later overcast and on the 8th it was overcast. Under these conditions the #21 Mazda 6, which was entered into the Super Cup class, passed the checkered flag in 5th place, while in the Mass Production class the #19 Mazda 3 finished 8th/9th (heat 1/heat 2), the #20 19th/12th and the #21 was forced to retire in heat 1.

For the rain covered qualifying, the Mazda 6 adjusted its settings to the rain tires and managed to secure 5th place on the grid out of the 9 competitors. As for the Mazda 3s, the #19 took 9th out of the 30-strong pack, the #21 grabbed 15th, but the #20, when running in the practice session held before qualifying, was forced to evade a preceding machine and made contact with the tire wall. Although they attempted to carry out repairs in the short interval before qualifying began, the drive shaft that took the brunt of the impact broke in the first qualifying lap, leaving them unable to record any result and they would start from 28th place.

In the final race the Mazda 6, equipped with a tuned up 2.0 liter naturally aspirated engine, was going up against 2.0 liter turbo VWs, amongst others. Although this made for a difference of about 40 horsepower, the Mazda 6 managed to take advantage of its superior chassis and cornering speed to effectively challenge the rivals in front. Although it managed to climb up to 4th place at lap 7 it spun out and went off course. Although it went on to pull out a fierce fight back from 8th place it ultimately passed the checkered flag in 5th. Although it missed out on a podium finish a large number of spectators were enthralled by the performance.

As for the Mazda 3s, the #19 completed heat-1 in 7th place and, despite being hit by a car to its rear in heat-2, displayed a solid drive to complete the second heat in 8th. The #20 managed to overtake 9 cars in heat-1 to place 19th and passed an impressive 7 rivals to finish 12th in heat-2. The #21 managed to climb up to 8th by lap 4 in heat-1, but was slammed by a vehicle to its rear, forcing it off track where it got stuck in the gravel and was unable to return to the track.

The final round at the Beijing International Circuit was a tough slog for every car in the team and while there were some that achieved some commendable results there were others whose end to the season was less than hoped. In the second half of the season the Mazda 6 and Mazda 3 began to show steady progress in speed and reliability and we have closed out this, their inaugural CTCC season, with a desire to see them fully realize this inherent potential in the future.