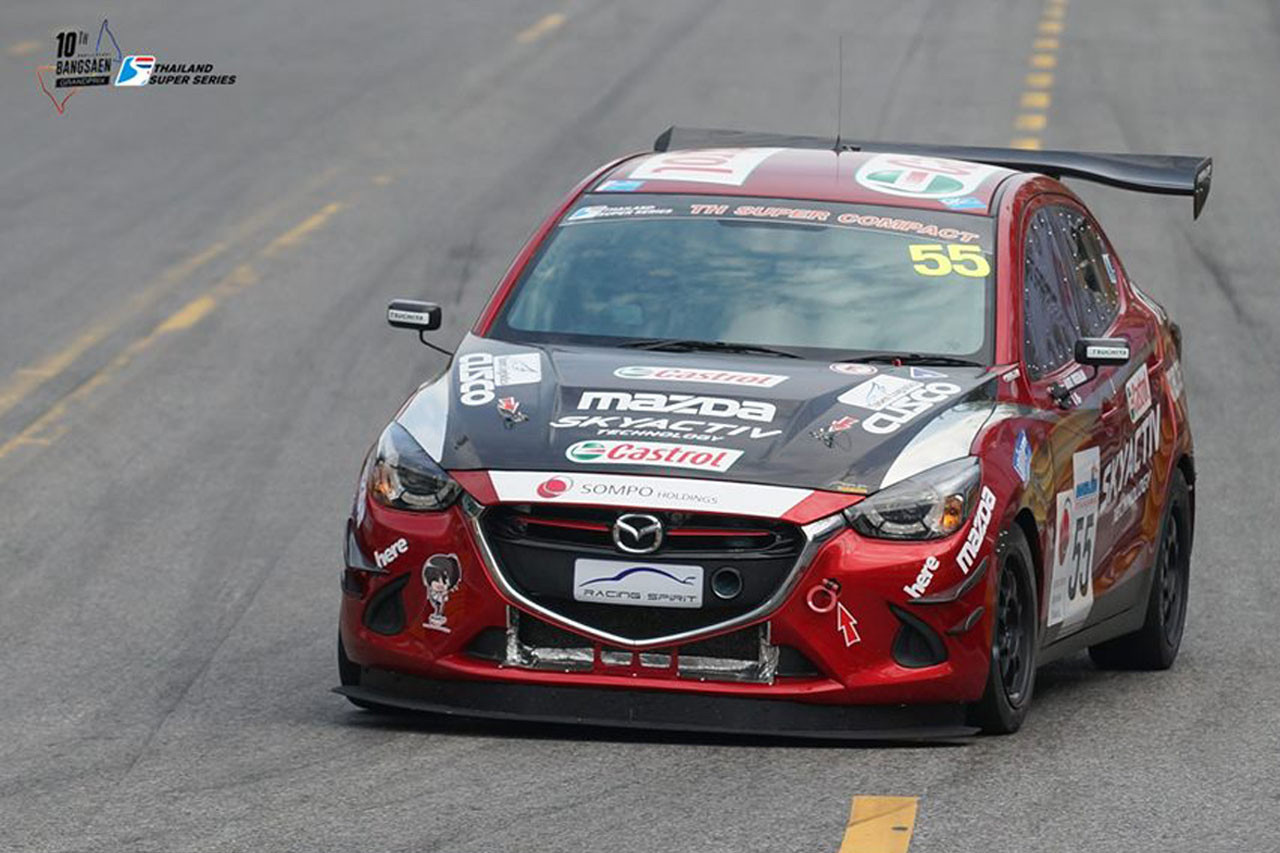 Thailand’s largest motorsports event, the “Bangsaen Grand Prix” was held over February 24th to 26th on the Bangsaen Street Circuit where the #55 Mazda 2 diesel turbo of Mazda Thailand’s official team, Innovation Motorsport, competed in the Super Compact Race with Michael Freeman behind the wheel. Here he took 2nd place in both race 1 and race 2. With this they finished the 2016 season in a strong position to aim for a top order finish in the next series.

The Bangsaen GP is set as one round of the Thailand Super Series and was scheduled to be held at the end of November last year but was postponed due to the passing of the nation’s late king, Bhumibol Adulyadej. Mazda Thailand / Innovation Motorsport entered two Mazda 2 Diesels into this series with the #44 5-door hatchback driven by Tachapan “Ploy” Vijittranon (Thailand) and the #55 4-door sedan seeing Michael Freeman (Australia) take the reins. Bangsaen is located close to Thailand capital of Bangkok and is known as a resort area that sees a large number of spectators and tourists turn out for the races. The team began competing from the 2015 season and built up two Thailand produced Mazda 2 diesel race cars to challenge the series. The team truly began to display competitive pace from mid-2016 and, with high hopes for a good result in these races, continued to improve on their cars’ aerodynamics and power units. These efforts proved fruitful as the #55 leapt out of a 3rd place qualification to immediately climb up to 2nd and engage in a fierce pursuit of the CR-Z in spite of the latter’s advantage in horse power. Despite being right on its heels it ultimately passed the checkered flag in 2nd. The #44 finished the race in 5th. Race 2 began with an irregular reverse grid and the #44 began from pole position and the #55 from 4th. The #55 again showed a strong pace in this race, moving up to 2nd where it remained to take another podium finish. The #44 unfortunately locked up its brakes on a downhill corner to touch the fence and lose time. It ultimately finished in 6th.

Looking back on the 2016 season team representative Michael Freeman stated, “The 2016 season for the Mazda 2 Diesel was the second year of technical development in our three year master plan. The plan was to challenge for podiums all year and be in a position to fight for the top step of the podium at the Bangsaen final. We accomplished this with dedicated hard work from our team at Innovation Motorsport and our sponsors. Technical assistance from Castrol, Idemitsu and Cusco and our engineering team’s hard work had the #55 car finish 3rd outright and the #44 car take 1st place in the junior driver category class C. Importantly the strong outcome at Bangsaen moved the team into 2nd place in the team championship. Finishing round 8 with a 2nd place but most importantly fastest lap of the race is a great end to the 2016 Championship. One team of people that we need to thank are the engineers and workers at Hiroshima that designed and built this Mazda 2 Diesel originally. To have such an incredible platform to work from is a credit to the team. This plan was to win the overall drivers’ championship, win the team championship and again develop another young driver to win the junior championship.”