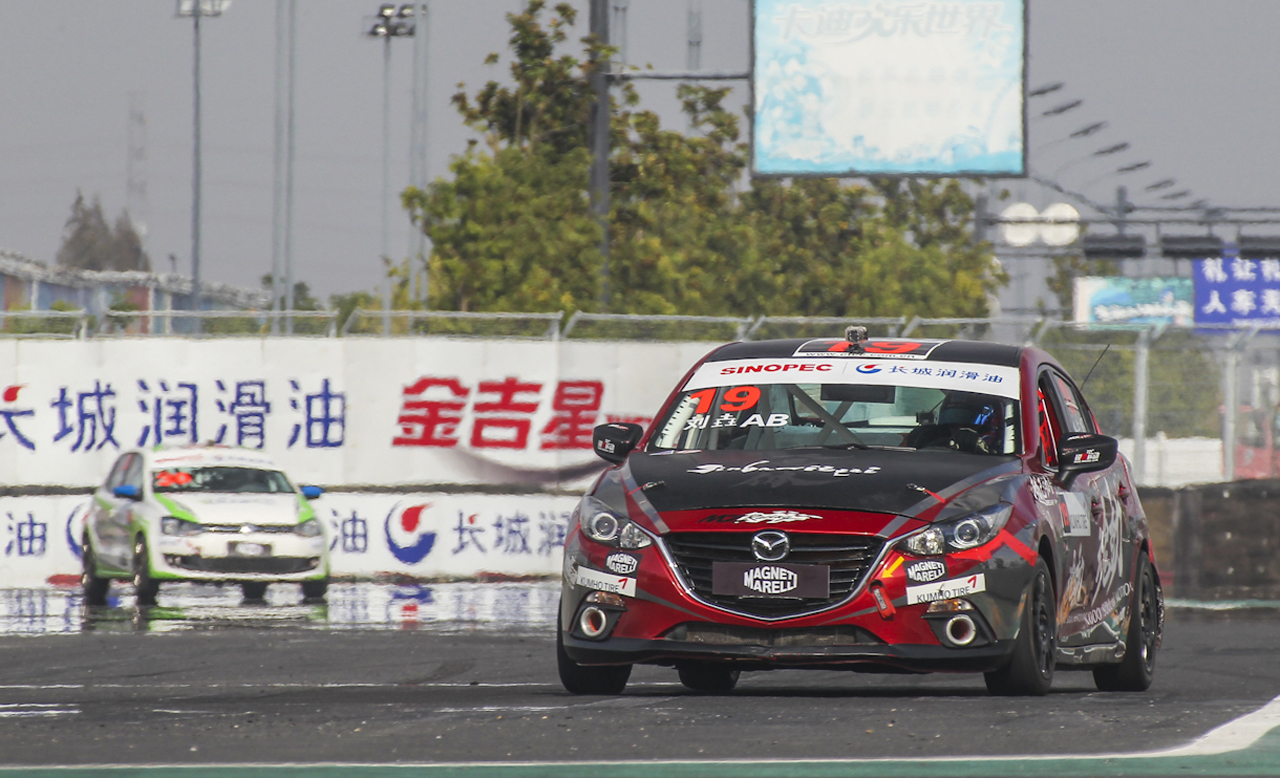 Round 7 of the China Touring Car Championship (CTCC) was held over October 24th (Sat) to 25th (Sun) on the Jiangsu Yancheng Street Circuit where the two Mazda 3s competed in the mass production class. Although they each managed a first 1st place finish in heats 1 and 2 respectively, their results were unfortunately revoked due to officials ruling that they were in violation of vehicle regulations.

This time all eyes were focused on the performance of the Mazda 3s in the mass production class. The #20 and #21 Mazda 3s were entered by the Mazda China backed Beijing Luisu racing team, while the #19 Mazda 3 was a private entry. Having attained permission to carry out weight reductions, these three machines went into this race 40kg lighter than previous rounds. In qualifying the #20 managed to grab the fastest time within the 30-car pack. The #19 secured 5th on the grid and the #21 10th. However after the post qualifying press conference had concluded another team made an official complaint. After inspectors examined the seal of the car’s air restrictor (usually done simply through blocking the restrictor with a ball to confirm that the engine will stall) the #20’s results were retracted, meaning it would start from 27th on the grid.

Following on from this, on the morning of race day, the #20 Mazda 3 installed the necessary air restrictor under the supervision of inspectors and then headed into the main race. The final race for the CTCC production class is implemented in two heats. In the first heat the #20 shot out from its 27th place start and carried out a fierce pursuit of its rivals that saw it complete the race in a commendable 8th place. The second heat saw the pack beginning in reverse order to the first, meaning the #20 started from 5th on the grid. From there it went on to finish the second heat in 1st. The #19 started the first heat from its 5th place qualification and pulled out a superb run to see it pass the checkered flag in 1st. With the order reversed in the second heat, it began from 12th on the grid and, due to requiring a tire replacement mid-race, ultimately finished in 27th. The #20 started from 10th and implemented a steady driving performance to complete heat one in 15th, which it followed up with an 8th place finish in the heat two.

Beijing Luisu also entered their #20 Mazda 6 into the Super Cup class where it qualified 7th fastest out of the 12 competing machines. In the final race veteran, Liáng Xīn Róng made a meal of the urban street track and managed to pass the Mercedes C200 and Audi A3 to finish in 4th place.

However, in the mass production class there would be another complaint against the #19 and #20 after the race was completed. As with qualifying, the same method was utilized to confirm the sealing of the air restrictor, which was found to not have been sufficient. This resulted in both 1st place finishes from heat 1 and 2 being revoked. Just when it seemed like this round was going to be a huge first achievement for the team it ultimately ended in disappointment. The team does not believe it had an illegal air restrictor installed and retain objections to the ruling but have no choice other than to accept it. Despite this disappointing result, there is no doubt that the Mazda 3 has finally begun to pull out its full potential.