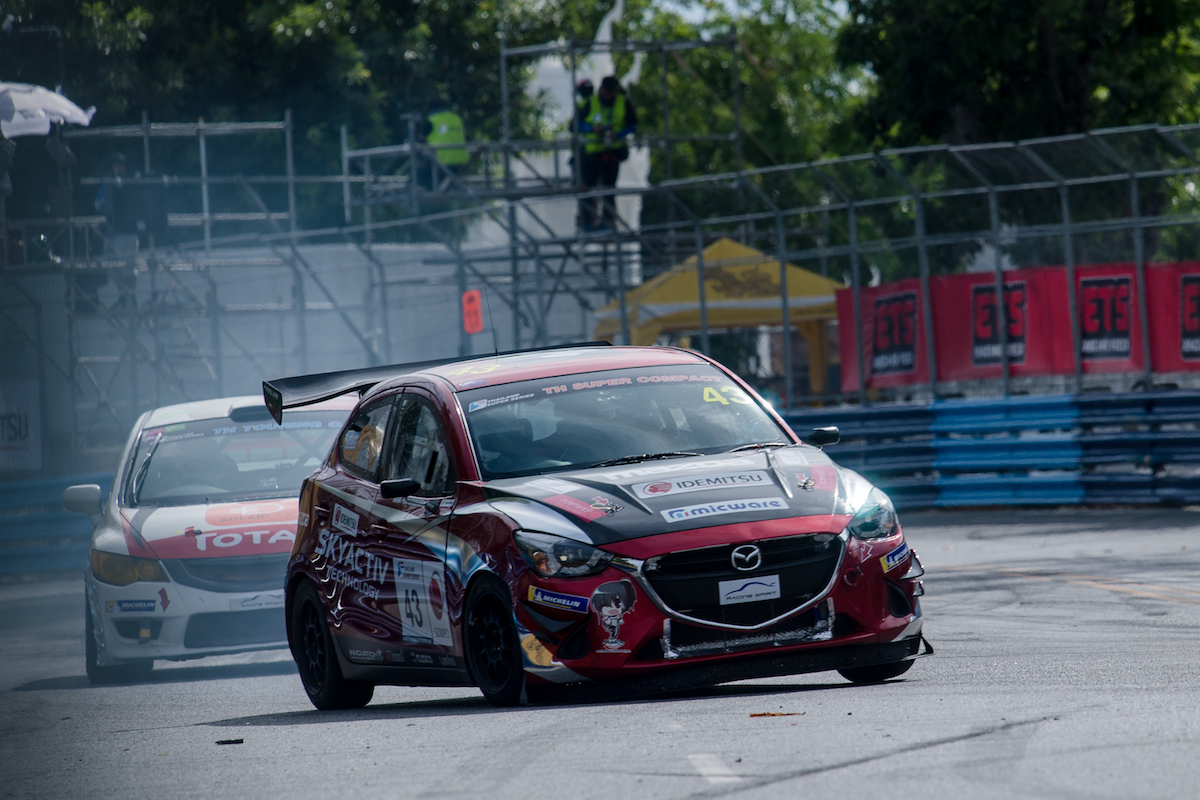 The two races for round 2 of the Thailand Super Series (TSS) was held over July 12th to 15th at Thailand’s Bang Saen street circuit where the official team of Mazda Sales Thailand, Innovation Motorsports, entered their Mazda SKYACTIV-D in the Super Compact Class where it took 2nd place in the second race (round 4).

Joining the team for this year, super rookie, 17-year old Jarut Jonviset, achieved a phenomenal debut win in the opening round at Buriram one month prior. Round 2 was held on the street circuit set up within the resort town, Bang Saen, which is located not far from Bangkok. Due to taking victories in the opening round’s races, the #55 Mazda (Jarut) was carrying 50kg and the #43 Mazda (Mana Pornsiricherd) 25kg of handicap weight. On a street course with a long straight and tight, slow corners, these heavy handicaps significantly affected the performance of the cars. In official qualifying held on the 12th, the #43 secured 3rd place on the grid, while the #55 grabbed 6th.

The conditions for the Bang Saen street race this year weren’t ideal and the repaved sections were particularly difficult and resulted in more than a few crashed. The round 3 race was held on the 13th and the #43 Mazda fell victim to one of these traps. Starting from 3rd place on the grid, Mana climbed up to 2nd place in lap 9 but was then pushed from the rear and crashed. This unfortunately resulted in a retirement. The safety car (SC) was then dispatched and the race was finished behind its lead. Despite this being the first Bang Saen race for #55 Jarut, he attacked the course without reservation, moving up to 5th before crossing the finish line. Round 4 was held on the 15th, and this time it was unfortunately Jarut who experienced a crash. The race began from a reversed grid and #55 Jarut started the race from pole position. The veteran, Mana began from 10th place on the grid and steadily began to weave through the competition, climbing to 3rd in the opening stages. By lap 8 he had moved into 2nd and rendezvoused with the #55 Jarut. However, in lap 10 Jarut’s #55 Mazda lost control and crashed into the concrete wall. This caused a great deal of damage to the front of the car, making it impossible for him to continue to race and the SC was dispatched. The race was ended behind the SC and the #43 Mazda 2 Diesel grabbed a 2nd place podium finish.

“After being forced to retire due to that push from a rear car in round 3 I went into round 4 determined to climb up to a top spot. I was aiming to take the race lead when the race was restarted after the yellow flag caution but, in the end, the race was ended behind the SC. I want to send out a huge thank you to the team who worked around the clock to repair the damage from yesterday’s crash. In the next round I want to achieve a 1-2 finish with my teammate, Jarut.”

The next round of the TSS will be held Bira International Circuit, Pattaya at the end of August.