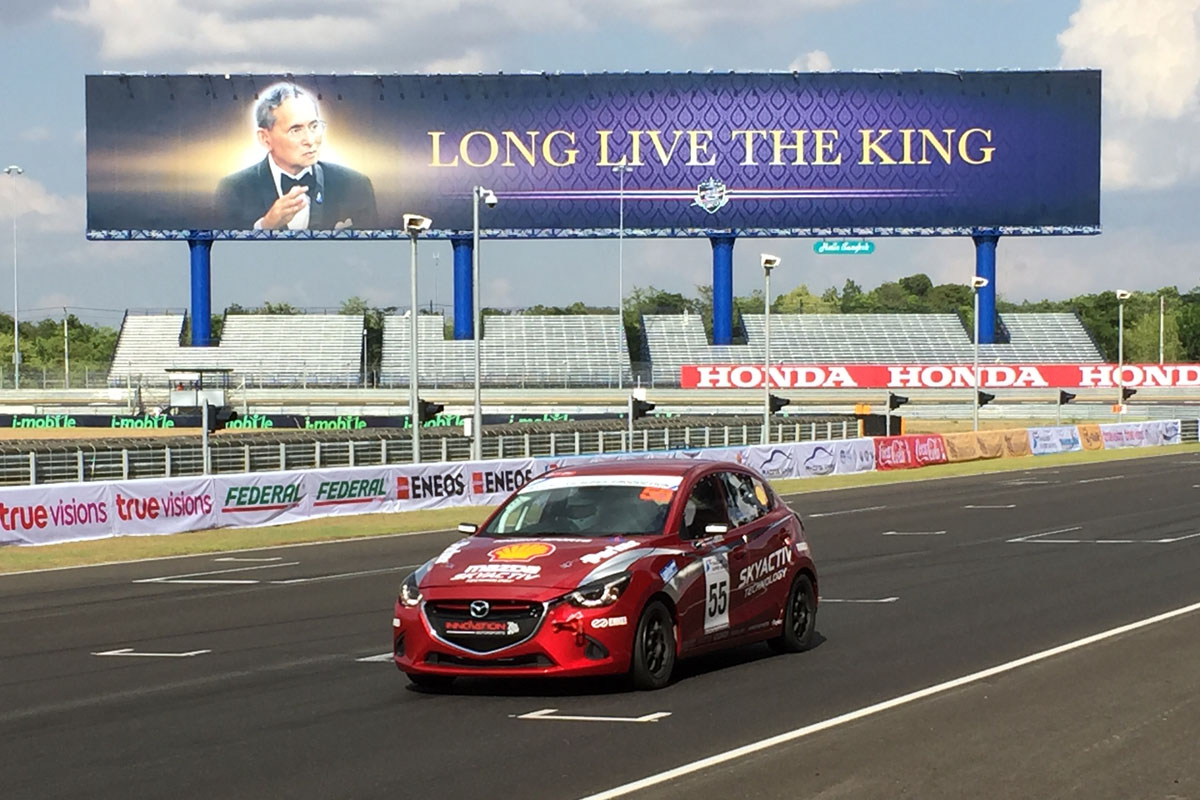 The opening round for the Thailand Super Series was held at the Buriram International Circuit over May 9th to 11th and the official team of Mazda Sales Thailand competed in the race. It was the racing debut of the new model Mazda 2 (Demio) equipped with a 1.5 liter SKYACTIV-D diesel engine.

With the new Mazda 2 SKYACTIV-D having only just gone on sale, it went into the race without being satisfactorily tuned but was still able to effectively compete. However, as this model was required to be based on the Thailand produced version, the car that competed had an automatic transmission, which meant that it was a whopping 100kg over the specified weight. This resulted in it marking a qualifying time 10 seconds slower than the top machine. Still, it can be said that they achieved a number of milestones, such as completing the car’s first ever race without hitch, and allowing the team to acquire a great deal of necessary data on the condition of the machine. Driver and team representative, Michael Freeman (Australia) related, “The running stability and handling of the car are fantastic. I think if we can change it over to a manual transmission as soon as possible and increase power, we’ll definitely be able to grab some good results.” In the 2nd round held on the last day, the Mazda 2 would again start from the tail end but this time, perhaps because the drivers had grown used to the automatic transmission, the car showed improvements in its lap times. The team intends to steadily proceed with the development of the machine, through the installation of a manual transmission, implementing weight reduction, increasing the engine output, and so on. By this year’s final round in December they are aiming to raise up a machine that can compete with the top dogs in the series. Furthermore, during re-inspection following the end of the race, many people, including the event organizers and FIA dispatch officers, noticed that the exhaust was virtually free of smoke stains and praised the vehicle for being an environmentally friendly race car.

Also garnering a lot of attention this year is the 17-year old high school student, Tachapan Vijittranon (nicknamed: “Ploy”), who is competing for the Mazda Innovation Team in a previous model Mazda 2 1.5 liter SKYACTIV-G. Despite her small stature and gentle appearance, this young driver displayed exceptional racing sense and put in a fantastic run. Ploy has been competing in kart racing from a young age and has participated in a number of international competitions around Asia, taking numerous podiums. For these races, the Super Production and Production classes raced together, making a total of 29 cars running all at once. Under a sweltering temperature of 40°C, she took 4th place in the C-class in the 1st round. In the 2nd round she was hot on the heels of the Honda Jazz, which took victory, and passed the checkered flag in 2nd with only a 0.5 second difference. Keep your eyes focused on this new young talent as she makes a name for herself in this series. The next round of the Thailand Super Series is scheduled to be held in July at the Buriram International Circuit.