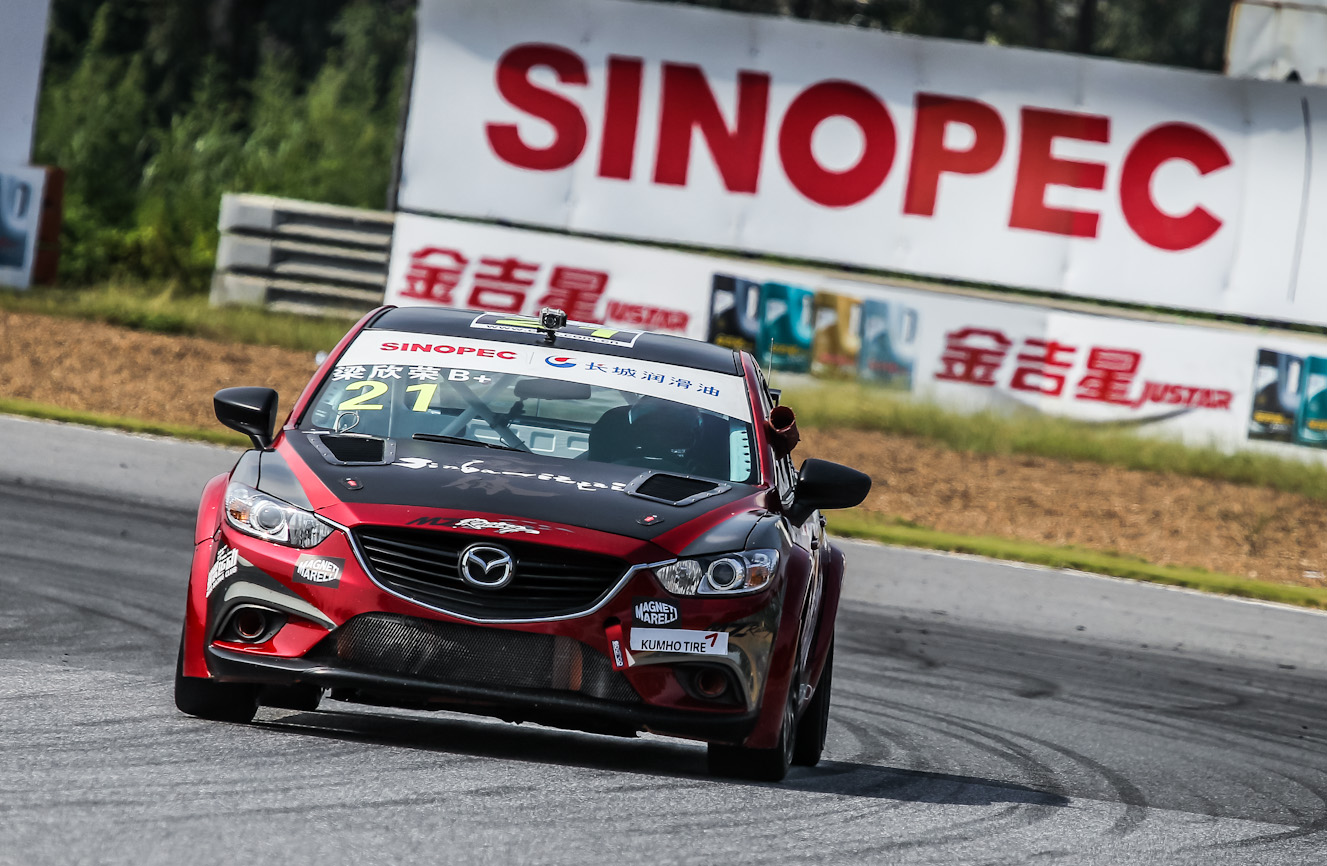 Round 5 of the China Touring Car Championship (CTCC) was held over August 15th (Sat) to 16th (Sun) at the Guangdong International Circuit, in Guangdong, China. Here the Mazda 6 Atenza, entered by the Mazda China supported Beijing Luisu Racing Team, achieved its first podium of this, it’s first year of participation, and there are plenty of races left in the season. This is the first time a Mazda vehicle has taken a top 3 finish in the CTCC series.

For this race the Beijing Luisu Racing Team entered a Mazda 6 Atenza into the Super Cup class and three Mazda 3 Axelas into the mass production class.

The majority of their Super Cup rivals vehicles sported 2-liter turbo engines. Leading up to the official qualifying rounds held on the 15th, in their hometown of Beijing, the team carried out extensive weight reduction on the Mazda 6, which lightened it by over 100 kilograms. At the same time they increased the engine’s power up to 335hp. However, just before they departed from Beijing, they experienced an irreparable engine failure just after their final test, which meant they would head into the race using a 276hp spare engine they had prepared in case of emergency. That being said, the team had carried out countless tests at their own circuit, which meant the reliability of the car’s other parts were significantly improved and they passed through qualification without a hitch. Challenging the mass production class in a Mazda 3 Axela, driving ace Sun Jon’s machine (#20) also underwent an 80kg weight reduction. During official practice held on the morning of the 15th, he busted out a class top time of 1 minute 35 seconds. Unfortunately, an exhaust pipe change carried out just before the start of qualifying caused a loss of power that saw him place a disappointing 19th out of 30 competitors, a frustrating result. Although there hadn’t been enough time to implement weight reduction on the #21, which took part in round 4 in Korea, it was still able to place 22nd out of the 30 machines. In addition, the entry from students belonging to the Beijing Luisu run racing school, the #19, also put in a valiant effort to place 23rd.

The Mazda 6 headed into the final race on the 16th going up against six rivals utilizing turbo engines. Considering that they were impeded by a more than 80hp difference with their competition, they went into the race with a modest aim of carrying out consistent runs and completing the race. Ultimately, though, their tenacious drive saw them finish 3rd overall, achieve a club team class victory, and the first CTCC series podium for a Mazda vehicle. In the mass production class, the #20 Mazda 3 sought to reclaim the loss of position it suffered in qualifying and shot into an aggressive drive in the first lap. However, this attempt backfired when, at the second corner, it got caught up in a melee, which caused it to spin out, go off course and, unfortunately, retire. The #21 experienced some engine trouble following qualifying held on the 15th, and went into the race with a spare engine that the team had hurriedly installed. However, due to having not yet carried out sufficient testing of this engine, the oil pressure would not sufficiently increase, and despite somehow managing to complete the first heat, in the second heat they pitted after only 2 laps and retired in order to protect the engine. The private entry #19, despite being of a lower spec than the #20 and #21, displayed a consistent run which saw it place 18th in both the first and second heats.

This round 5 at Guangdong proved to be one in which the team was unable to fully take advantage of the weight reduction and power increases they had carried out on their machines. Still, when looking at the results, with the Mazda 6 taking their first CTCC podium, and so on, it became a round where one could glimpse the potential performance this team is capable of.

The next round will be held on September 27th (Sun) at the Shanghai International Circuit. Let’s hope the Mazda 6 and Mazda 3s can pull out a race that displays the full performance these vehicles are capable of.